(ORDO NEWS) — The European space agency Mars Express has received a picture of a unique crater on Mars, similar to the eye of the Sahara, which has a size of 30 kilometers.

The Eye of the Sahara is a geological formation that was first photographed by Gemini astronauts in the 1960s. Scientists have been trying to explain this phenomenon for decades. A similar structure measuring 30 kilometers in size was seen on Mars in the Aonia Terra region.

The image taken by the European Space Agency’s Mars Express shows only part of Aonia Terra, a mountainous region in the southern part of the Red Planet. The crater sits at the center of a landscape of meandering channels that look like veins running through the human eyeball.

Astronomers suspect that the channels likely carried liquid water across the surface of Mars about 3.54 billion years ago. According to the ESA, the channels look like they are partly filled with dark material, and in some places appear to rise above the surrounding landscape.

“There are many possible explanations for this. Possibly erosion-resistant sediment formed at the bottom of the channels as water flowed through them.

Or perhaps the channels were once filled with lava,” the ESA said in a statement released alongside the image.

The image taken by the probe shows different colors on the Martian surface, suggesting different materials. While in the south of the crater (to the left of the true color image above) the surface is warm red, fading to a darker brownish gray closer to the crater, inside the crater the dark dune field rests on the lighter surface. 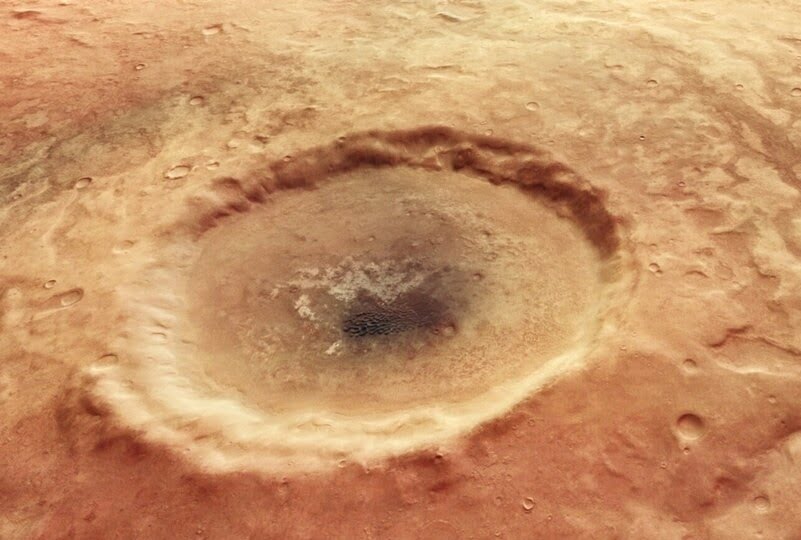 The image also shows rocks with flat tops, which were formed by the action of water, wind or ice.

“This is evidence that many different materials have accumulated inside the crater,” the ESA said.

Aonia Terra is a dark spot on the surface of Mars that can be seen from Earth even with the simplest telescopes. Aonia comes from Greek mythology and was once a place sacred to the Muses, goddesses of literature, science and art in ancient Greece.

Mars Express has been orbiting the Red Planet since 2003, mapping Mars. The probe also analyzes the composition and circulation of the rarefied atmosphere by examining various phenomena beneath the Martian crust.

The expert insists that Mars was inhabited

The expert insists that Mars was inhabited