(ORDO NEWS) — Exactly one hundred years ago, on November 4, 1922, British archaeologist Howard Carter discovered the first step of a tomb in Egypt’s Valley of the Kings.

It belonged to the teenage pharaoh Tutankhamun Nebkheperura, better known today as Tutankhamun. The discovery immediately became a sensation.

A century later, the world media again could not ignore this topic, especially since some of the secrets of Tutankhamen remained undisclosed. It all started on November 4, 1922, when workers led by Carter discovered a stone step in an unexplored part of the Valley of the Kings.

Excavations began, and by November 23, the team had unearthed the entire staircase leading to the mysterious door.

It was decorated with a hieroglyphic inscription, which was immediately deciphered. So the world learned that behind the mysterious door is the tomb of the unknown pharaoh Tutankhamun.

The discovery glorified Carter twice – first, the news spread around the world that the tomb was full of treasures. Indeed, Tutankhamun was buried with an incredible amount of luxury items.

Just these days, the museum community is preparing a large exhibition, the exhibits of which will be thousands of items from the tomb of Tutankhamen

In total, 5398 items were cataloged at the opening, including a golden face mask, a throne, bows, bowls, hundreds of statues of servants, furniture, and even underwear.

But there are suspicions that Carter did not catalog all the items found, but “pocketed” something, just as ordinary workers whom the archaeologist attracted to excavations could pocket something. 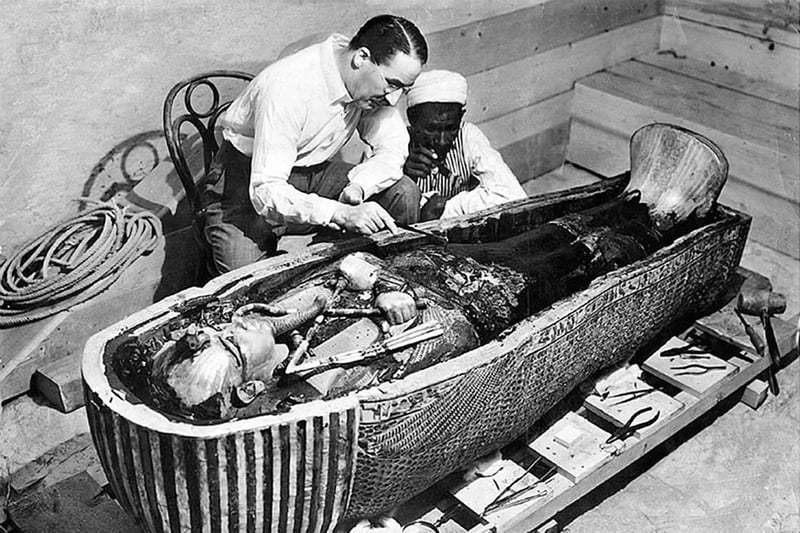 Even the coffin was unique – it consisted of three sarcophagi nested in each other, and one of them was gold. The first of the three coffins was first shown to the public only on September 21, 2019. It is now awaiting restoration in the laboratory of the new Grand Egyptian Museum outside of Cairo.

Surprisingly, during the 3300 years that have passed since the death of the pharaoh, marauders have not plundered the luxurious tomb, although in ancient times this was a common thing. Why didn’t they touch her?

The second factor that played into the hands of worldwide fame is the legend of a curse that allegedly affected everyone who, together with Carter, dug up the tomb. These people fell ill and died under very mysterious circumstances.

However, now scientists say with confidence that no curse exists, and the myth, generated by a combination of circumstances, may have been launched so that Tutankhamen (and Carter along with him) became famous.

Be that as it may, but it was then that the world was embraced by the fashion for everything Egyptian. The story with the curse was filmed – in 1932 the film “The Mummy” was released with Boris Karloff in the title role.

It was the story of an archaeologist who found a tomb and a mummy came to life wrapped in linen. The idea for the plot arose from a series of strange deaths that occurred after the discovery of Tutankhamun’s tomb. For example,

Amazingly, the world fame came to Tutankhamen after millennia, and during his lifetime he was not noted for anything special. Pharaoh died at the age of 19, having achieved nothing, but today he has “resurrected”, having turned into a real superstar.

It is known that Tutankhamen came to the throne around 1334 BC, when he was 10 years old. In the history of the Egyptian pharaohs, according to his merits, he occupies a secondary place.

Perhaps the rumors about his incredible wealth are also exaggerated – it’s just that his tomb was the only one that has survived to this day, sealed. But it must be admitted that many items, including the funeral mask, have become iconic over the past hundred years. 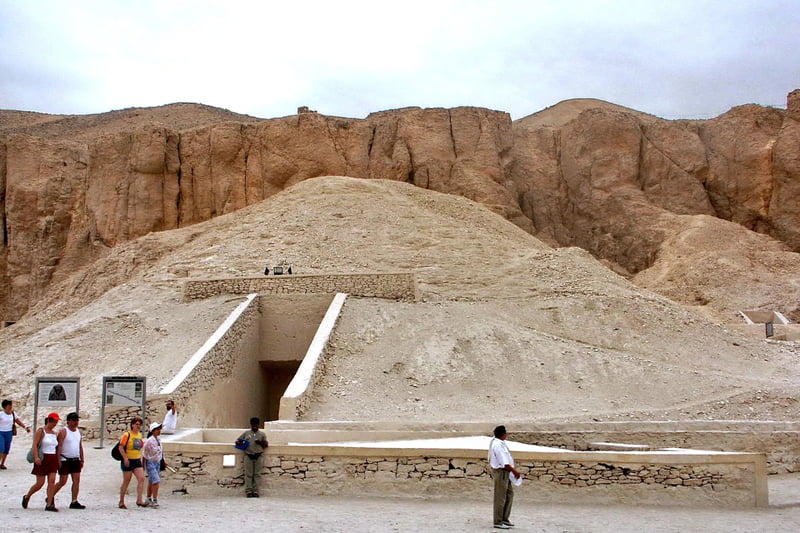 Despite the fact that scientists around the world have been studying the history of Tutankhamun for a whole century, some of his secrets remain unsolved. For example, scientists are still arguing about the cause of death and even the appearance of the teenage pharaoh.

There was an opinion that he was a very fragile and sickly boy who had a “clubfoot” and limped heavily when walking. This led some researchers to believe that a weakened immune system was the cause of his death.

“But recent research shows that it is wrong to portray Tutankhamun as a fragile pharaoh,” Egyptologist Bob Brier was quoted as saying by Science News. According to him, the mummy of Tutankhamen and objects from the tomb indicate his physical strength and the position he occupied in society.

It is believed that the young pharaoh could even participate in the war. Brier notes that war chariots, leather armor and archery equipment were found in the tomb. Probably, Tutankhamen wanted to take all this with him to the afterlife, which means he could be a hunter and a warrior.

In addition, blocks with inscriptions from the Temple of Tutankhamun were found not so long ago in other Egyptian temples, which were reused in later building projects. So they depict the pharaoh at the head of the war chariots, which are involved in battles unknown to historians.

The second unsolved mystery of Tutankhamun is connected with Akhenaten, whom many researchers consider his father. He went down in history as one of the most powerful rulers of Ancient Egypt.

Akhenaten was a “heretic king” who “abolished” all previous gods and created the cult of the sun god Aton, ordering everyone to worship only him.

Nobody dared to disobey the pharaoh, but after his death, the Egyptians regained their former diverse host of deities, and they tried to erase all information about the reign of Akhenaten from history.

It is known that Akhenaten, who changed his name and named himself after the Aten, moved to the isolated city of Amarna, where he lived with his wife Nefertiti, six daughters and one son, as well as with about 20 thousand of his followers.

Not so long ago it became known that the son of Akhenaten was called Tutankhaten, he was also originally named after Aton. But when the boy became pharaoh, his name was changed to Tutankhamun, after Amon, the most powerful of the Egyptian gods of the day.

After his death, Tutankhamun was treated so scornfully that the ground above his tomb was leveled and houses were built on it. Perhaps because of this, Carter was able to find the tomb untouched. 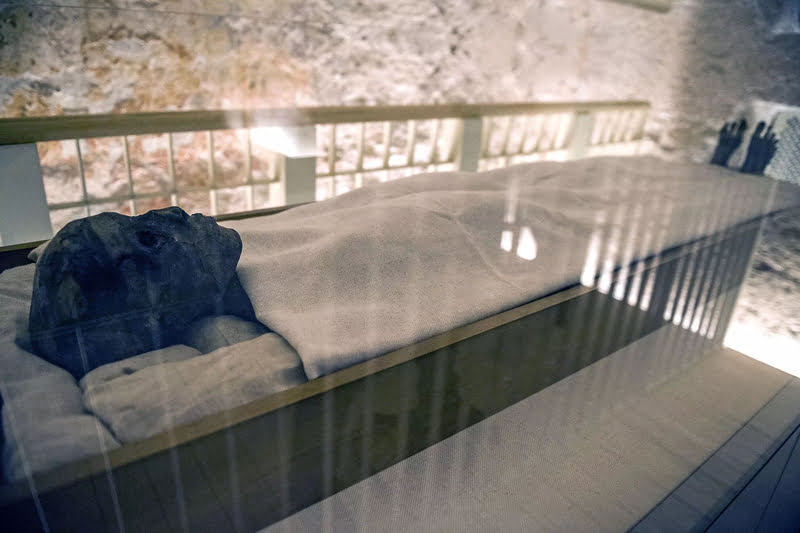 By the way, another unsolved mystery is connected with the history of the creation of the tomb. The pharaohs began to build their tombs, barely taking their place on the throne. Construction sometimes took decades.

But Tutankhamen ruled for only nine years, moreover, at the beginning of his reign, he was very small and could hardly have ordered the construction of a tomb for himself immediately after ascension to the throne.

However, Egyptian traditions required that a mummified body be placed in a tomb approximately 70 days after death. Apparently, this time was enough for the body to turn into a mummy.

Judging by indirect data, the death of Tutankhamun was premature and unexpected for his entourage. It is believed that by that time the construction of the tomb had not even begun. Consequently, the masters had no more than 70 days to build it.

Does this mean that the tomb of Tutankhamun was built “in haste”? Evidence found in recent years indicates that workers “repurposed” many items from the tombs of other dignitaries for Tutankhamen. And the study of three of his sarcophagi showed that they were being prepared in a big hurry.

Some of the carvings were not completed, and the materials from which the outer sarcophagus and its lid were made turned out to be different. In his new study, Brier suggests that something happened to the original lid, causing it to be lost. 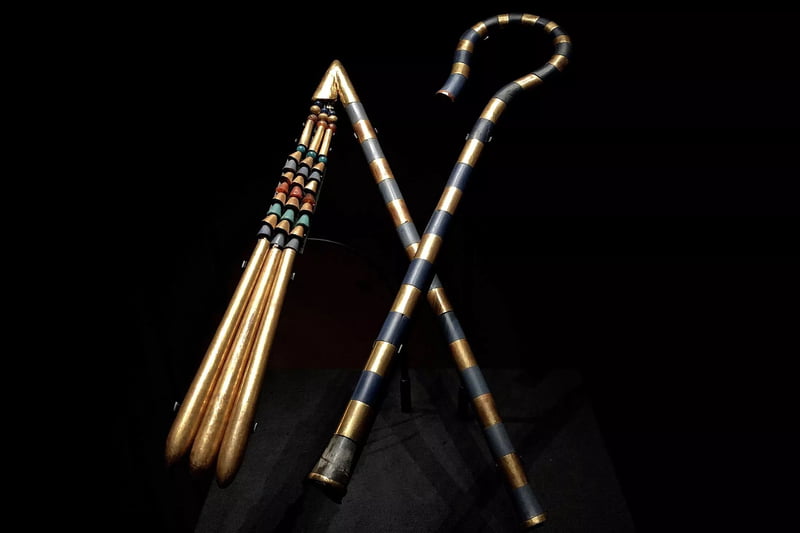 Another mystery that has only recently been ajar is the mysterious dagger of Tutankhamen. It was found among 5398 cataloged items. Among other artifacts was a set of iron blades reminiscent of the Pesesh Kaf, an instrument used in the “mouth-opening ceremony”.

Such a ritual was performed for the dead so that they could breathe, drink, eat and speak in the afterlife. One of the blades is an iron dagger in a richly jeweled gold scabbard. 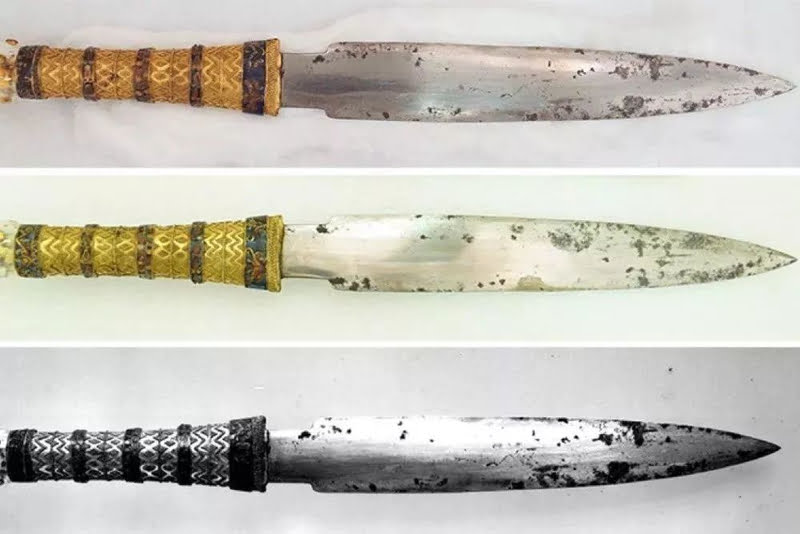 At the time of Tutankhamun, the practice of smelting iron from ore did not actually exist yet. Where did the young pharaoh get the iron dagger from? The mystery was revealed only in 2016, when X-ray fluorescence spectrometric analysis of the blade was carried out.

This conclusion was confirmed by a study published in February 2022. Scientists were able to determine that the source material for making the dagger was octahedrite, one of the most common types of ferruginous meteorites.

However, the mystery remains how the dagger came to Tutankhamun. Studies have shown that it could not have been made in ancient Egypt. Maybe it was a gift?

By the way, in the letters of Amarna, diplomatic documents of the 14th century BC, that have survived to this day, gifts of iron are mentioned, donated to the pharaohs of Egypt even before the reign of Tutankhamun.

One of these letters notes that Tushratta, the king of Mitanni (the ancient Hurrian state of the 17th-13th centuries BC, which existed on the territory of Northern Mesopotamia), sent iron objects, including blades, to Amenhotep III, whom Egyptologists consider the possible grandfather of Tutankhamun.

Maybe the teenage pharaoh got his mysterious dagger by inheritance? 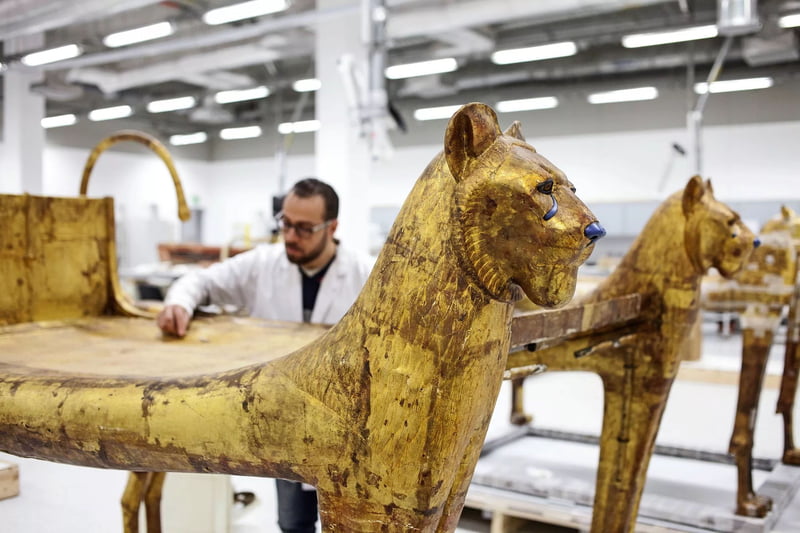 There is another mystery: no one has yet studied how exactly it happened that the tomb of Tutankhamun forever changed archeology, gave rise to an unprecedented illegal trade in antiquities, influenced the fashion and culture of the whole world, and turned Tutankhamun himself from an unknown ancient ruler into one of the most famous people in history.

It seems that this mystery has yet to be revealed by researchers of the future.