(ORDO NEWS) — The universe is indeed full of wonders, and the James Webb Space Telescope just gave us the best image of one of them.

The object in question is a star with a brightness of about 5,600 light rays. years ago, and Webb’s infrared eye caught an extraordinary detail: he was surrounded by what appeared to be concentric rings of light radiating outwards.

Although Webb’s characteristic diffraction bursts are not “real”, these concentric rings have a wonderful and fascinating explanation for them.

This star is actually a binary pair of rare stars in the constellation Cygnus, and their interactions produce precise periodic dust emissions that expand like shells into space around the pair over time.

These dust shells glow in the infrared, allowing a sensitive instrument like Webb’s MIRI to see them in great detail. 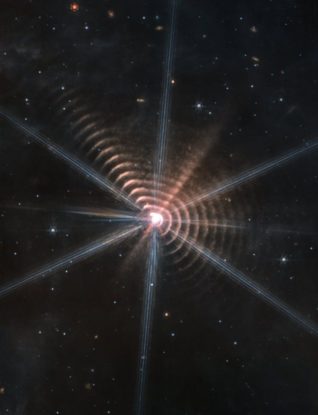 This star is known as a colliding wind binary consisting of an extremely rare Wolf-Rayet star called WR 140 and a hot massive star. An O-type companion star is another rare object.

Wolf-Rayet stars are very hot, very bright, and very old; at the end of their life on the main sequence. They are significantly depleted in hydrogen, rich in nitrogen or carbon, and lose mass very quickly.

O-type stars are among the most massive stars known and are also very hot and bright; because they are so massive, their lifespan is incredibly short.

Both stars in the WR 140 system have fast stellar winds blowing into space at about 3,000 kilometers (1,864 miles) per second. Therefore, both lose mass at a rather frantic rate. So far so good for both stars.

When two stars enter periastron (the distance is about a third greater than the distance between the Earth and the Sun), they approach so much that their powerful winds collide.

This causes jolts into matter around stars, accelerating particles and generating energetic radiation such as X-rays. These headwinds also cause episodes of dust production as the material in the stellar headwind cools.

This process can be seen in the animation below, which shows what the system will look like from top to bottom.

Dust is a form of carbon that absorbs ultraviolet radiation from two stars. This heats up the dust, causing it to re-emit thermal radiation, which is what Webb observed in the infrared.

The dust is then blown outward by the stellar wind, causing the partial dust projectiles to expand. They expand and cool as they are blown outwards, losing heat and density.

What you see in the Webb image is a bit like a series of bubbles; the edge of each dust shell is more visible because you’re looking at a denser concentration of material from perspective.

Since the orbit of the binary star has a period of 7.94 years, wind collision and dust generation occurs. like clockwork every 7.94 years. This means that you can count the rings of the nebula around the binary, like tree rings, to determine the age of the outermost visible dust shell.

About 20 rings are visible, which means you can see for about 160 years. ‘ is worth the dusty shells on Webb’s image. The last periastron of WR 140 was observed in 2016.

Webb’s observation of WR 140 was requested by a team led by astrophysicist Ryan Lau of the Japan Aerospace Exploration Agency’s Institute of Space and Astronautical Sciences.

They are preparing an observation report, so we may be on the verge of learning something new about this charming, crazy star.