(ORDO NEWS) — Enceladus, the icy moon of Saturn , hides under its surface an ocean of liquid water, saturated with chemical elements that could theoretically provide the origin and maintenance of life.

Enceladus was discovered on August 28, 1789 by the British astronomer William Herschel, but remained extremely poorly understood until the early 1980s, when two NASA interplanetary probes Voyager 1 and Voyager 2 visited it.

The greatest contribution to the study of Enceladus was made by NASA with its Cassini probe, which explored the Saturn system from 2004 to 2017.

Cassini, which met its end in the dense layers of the atmosphere of Saturn, bequeathed to us a huge amount of information, the study of which continues to this day.

Thanks to Cassini, we know that Enceladus appears to have a subsurface ocean, and this has made it one of the key targets in the search for extraterrestrial life. It is noteworthy that we are talking not only about microorganisms that can survive in the most extreme conditions, but also about somewhat more complex aquatic life that originated and developed independently of life on Earth.

Enceladus’s subsurface ocean is likely warm, aided by the gravitational forces of the gas giant it orbits. Tha is, Saturn literally stirs the ocean of Enceladus, causing it to heat up to moderate temperatures.

So, in this article, we will talk about the most important discoveries made in the history of the study of Enceladus, one of the most intriguing moons in the solar system.

The first images of Enceladus

The first images of this enigmatic moon were taken in 1981 by NASA’s Voyager 2 spacecraft on its way to the outer reaches of the solar system. Voyager 2 sent back images that showed that Enceladus has a complex geological structure , and its surface has gone through five different periods of evolution.

With a diameter of 504.2 kilometers (for comparison, the diameter of the Moon is 3,474.8 kilometers), temperatures at noon can reach -198 degrees Celsius, and it is the brightest satellite of Saturn – and the entire solar system – because its icy “shell » reflects most of the incident light.

In 2005, the Cassini probe discovered something startling: a huge cloud of water vapor and ice particles over the south pole of Enceladus, which was ejected through relatively warm cracks in the ice crust. This made it clear that there is geological activity on the Saturnian moon.

Liquid water below the surface

In 2006, scientists, after analyzing part of the Cassini data, came to the conclusion that there is a huge reservoir of liquid water under the surface of Enceladus, which is periodically delivered outside by geysers. In addition, they found evidence that “pockets” of liquid water are located relatively close to the surface.

In 2007, Cassini provided compelling evidence that periodic surges of water masses at the south pole were carried out through 130-kilometer faults called “tiger stripes”. These ejections are due to the influence of tidal forces that compress and heat Enceladus as it moves around Saturn.

At the moment of compression, the tension builds up, and the water of the subsurface ocean seeks its way out, heading towards the thin poles. It so happened that the south pole turned out to be the most vulnerable, where “tiger stripes” were discovered.

In 2009, Cassini found sodium salts in ice particles in Saturn’s outer ring. The discovery of salt ice indicated that the moon Enceladus, which “feeds” this ring with geyser emissions , has a subsurface reservoir of liquid salt water. Maybe it’s the ocean.

In 2011, Cassini, using an ultraviolet spectrograph and instruments to measure particles and fields, discovered that Saturn and Enceladus are connected by a strange stream of electrons that move back and forth between celestial bodies.

Additional evidence for a subsurface ocean

By 2014, Cassini had identified 101 geysers on the surface of Enceladus, all of which were shooting water vapor. Planetary scientists have little doubt that the steam delivered to the surface is associated with the internal ocean, which is especially active under the south pole of the satellite.

In 2015, Cassini provided scientists with the first clear evidence that Enceladus is showing signs of recent hydrothermal activity similar to that occurring in Earth’s oceans.

Silica-rich rock particles were found in the water vapor, and the scientists concluded that these tiny silica grains most likely formed when hot water, containing dissolved minerals from the rocky interior of Enceladus, rose to come into contact with cooler water.

Could Enceladus be home to life?

By 2017, after studying several geyser eruptions with Cassini instruments, researchers determined that the matter rushing out was 98% hydrogen and 2% other molecules, including ammonia, methane and carbon dioxide.

The detection of large amounts of hydrogen is evidence of an ongoing hydrothermal process in which Enceladus’ groundwater interacts with rocks and organic compounds .

Similarity to the earth

In July 2021, a study was published suggesting that methane has been found in Enceladus’ water plumes , which may indicate habitability of the tiny moon. Scientists note that no known geochemical process is capable of producing such a large amount of methane recorded by Cassini. 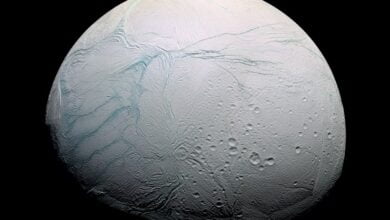 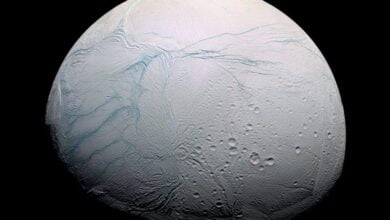 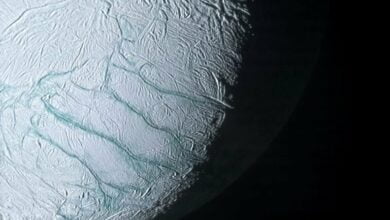 South pole of Enceladus, a potentially habitable moon of Saturn 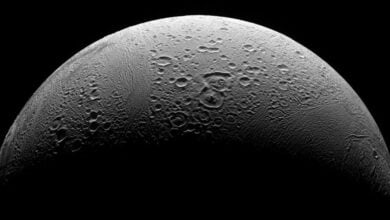 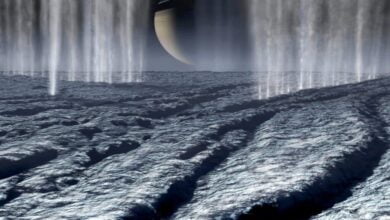 All the chemical ingredients of life found on Enceladus