(ORDO NEWS) — Researchers at ETH Zurich have obtained new data on the Martian crust. The new information calls into question some modern ideas about the Martian dichotomy – as scientists call the difference in the geological structure of the southern and northern hemispheres of the Red Planet.

Scientists managed to obtain information about the structure of the surface layers of Mars by analyzing seismic vibrations caused by meteorite impacts on the surface of the planet. It turned out that seismic waves propagate in the Martian crust faster than researchers had previously assumed.

Researchers at ETH Zurich (ETH Zurich) studied the properties of the Martian crust from data collected by NASA’s InSight seismometer after a meteorite hit the Martian surface in December 2021.

Recall that the landing module of the Mars InSight automatic station landed on the surface of the Red Planet in November 2018. On board, the device carried a seismometric sensor, with the help of which scientists had previously managed to determine the thickness of the Martian crust and mantle.

This was made possible by measurements of seismic waves propagating to the surface from the bowels of the planet and causing marsquakes.

However, deep shocks did not allow studying the structure of the Martian crust over a large area. Such a study became real thanks to the fall of two meteorites on Mars, which caused surface seismic vibrations.

At first, this event was indicated to scientists by unusual seismograph data, and soon the fact of the collision of Mars with a meteorite was confirmed by shooting from space. The images showed a fresh impact crater located about 3.5 thousand km from the InSight spacecraft.

“The coordinates of this location are highly consistent with our estimates of where the source of the marsquake is,” said Kim Doyoung, lead author of the study, geophysicist and senior research scientist at the Institute of Geophysics at the Swiss Institute of Technology Zurich.

In addition, scientists were able to determine that the meteorite crater, located at a distance of a little less than 7.5 thousand km from the InSight apparatus, was the source of the second unnatural oscillation of the planet. 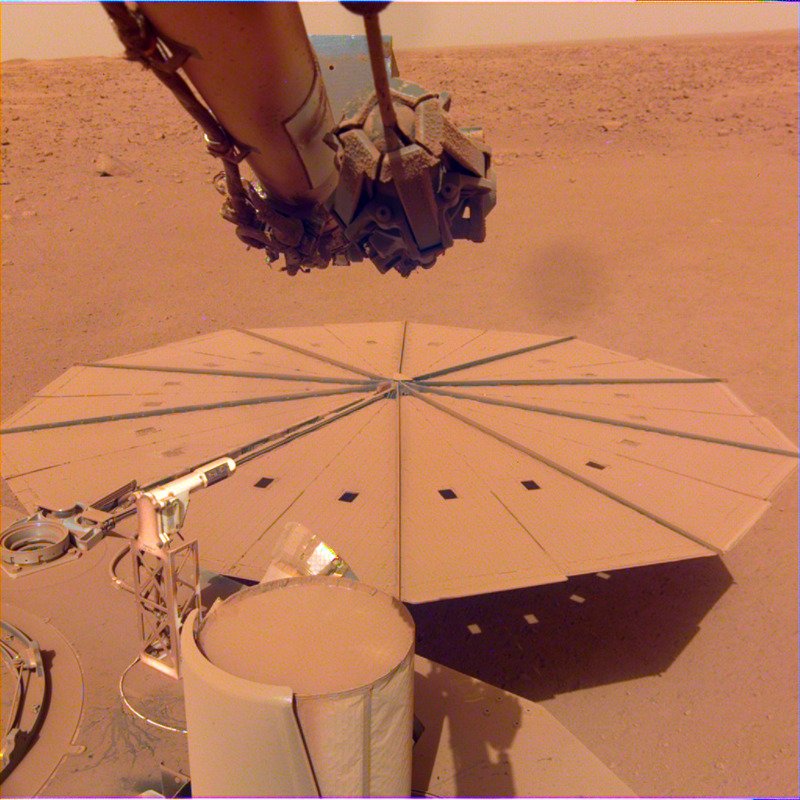 “Up to this point, our knowledge of the Martian crust was based on only one point measurement under the InSight lander,” Kim added.

It turned out that the propagation velocity of seismic vibrations in the Martian crust is higher than could be expected based on previously obtained data.

The structure of the crust under the InSight landing site is markedly different from the rest of the Martian surface. Scientists do not exclude that in this place it was formed under the influence of a meteorite impact billions of years ago.

As the authors of the study explained, the speed of propagation of surface waves depends on their frequency, which, in turn, depends on depth. Accordingly, at different depths, the velocity changes, which makes it possible to estimate the density and other properties of the rock at a depth of 5 to 30 km.

The initial results of the new study seem to refute one of the popular hypotheses about the dichotomy of Mars: the northern and southern regions of the crust do not appear to be composed of different materials, as has often been previously assumed, and at comparable depths they may turn out to be unexpectedly similar in structure.

Recall that, according to generally accepted ideas, it is believed that the southern and northern hemispheres of the Red Planet differ in height and rock structure – this phenomenon is called the Martian dichotomy.

“We do not yet have a generally accepted explanation for this dichotomy, because we have not yet been able to see the deep structure of the planet. But we are already starting to clarify this, ”said Domenico Giardini, professor of seismology and geodynamics at the ETH Zurich.

Experts told what not to do with the phone while charging

Experts told what not to do with the phone while charging