(ORDO NEWS) — The Solar Orbiter probe flew through the tail of Comet Leonard. This is reported by the European Space Agency.

In December 2021, Comet Leonard passed its closest approach to Earth and was visible to the naked eye. On January 3, it passed the point of perihelion, and now must leave the solar system, becoming an interstellar comet.

The Solar Orbiter probe, launched in February 2020 by the European Space Agency in conjunction with NASA to study the Sun, recently flew through the tail of this comet.

The probe was launched before the discovery of the comet in early 2021, and therefore the flight through the tail happened solely due to the coincidence of trajectories.

This luck gave scientists the opportunity to study the composition of the particles in this tail and its magnetic field. In turn, this will allow astronomers to study how the comet interacts with the solar wind, a stream of charged particles from the Sun.

The intersection of the trajectory was predicted in advance by Samuel Grant, a graduate student at University College London, and therefore the scientists prepared in advance for data collection.

In addition to tail particle data, the spacecraft also acquired a series of images of the comet. The black circle in the center of the images is the Sun, covered by the coronagraph so that it does not illuminate the frames. 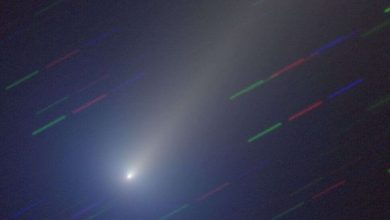 RIP Comet Leonard: Brightest comet to whiz past Earth in 2021 is now a blur of dust