(ORDO NEWS) — The CEO of Tesla and SpaceX has finally outpaced Jeff Bezos, the founder of the Internet company Amazon and aerospace Blue Origin.

In this, he overtook Jeff Bezos, the founder of Amazon and Blue Origin, who topped the list for four years in a row.

And back in 2020, Musk was on the 31st line, and last October, according to Forbes Real Time (updated in real time), he outperformed his competitor.

Now the fortune of perhaps the most famous American entrepreneur has reached 219 billion dollars (plus 68 billion for the year, mainly due to a 33% jump in Tesla shares). Bezos, on the contrary, lost six billion (171 billion in assets).

The top three is closed by the owner of the French fashion house LVMH Moët Hennessy – Louis Vuitton Bernard Arnault and his family: their fortune was estimated at 158 ​​billion.

In fourth place is the notorious Bill Gates, one of the founders of Microsoft, in fifth place is investor Warren Buffett . The calculation took into account the value of shares and exchange rates on March 11.

As Forbes notes, the situation in the world, in particular the ongoing pandemic and the fall in stock markets, has hit many of the richest people on the planet.

Together, their wealth is $12.7 trillion, up from $13.1 trillion a year earlier. The world has lost 329 billionaires, a decline not seen since the financial crisis in 2009. Still, there are 19 times more billionaires today than there were in 1987, when Forbes started compiling the rankings.

This year’s list included 236 newcomers: among them – 34-year-old singer Rihanna, director of the film trilogy “The Lord of the Rings” Peter Jackson, as well as American businessman, heir and investor 36-year-old Josh Kushner.

In total, the new Forbes list will count 86 billionaires under 40 years old and 12 people under 30 years old. The youngest was the 19-year-old heir to the German pharmacy chain Drogerie Markt, Kevin David Lehmann. More than 70 percent of the people on the list (1891 billionaires) earned themselves, and did not inherit the fortune. 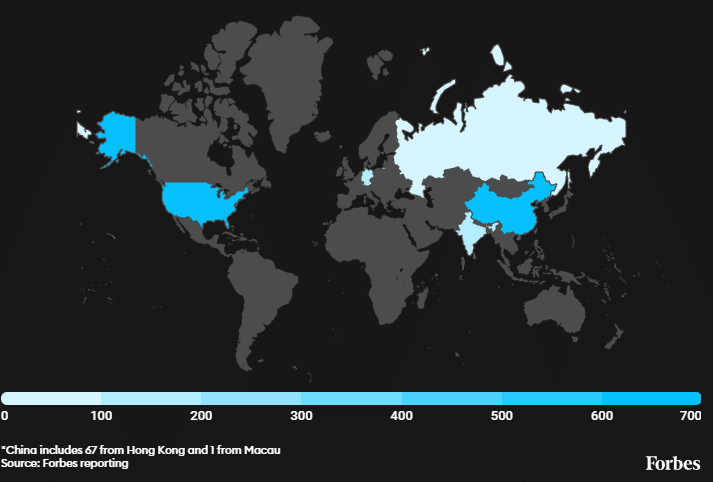