(ORDO NEWS) — The rotating solid ball at the center of the Earth‘s inner core appears to have recently come to a halt and may now be spinning in a different direction, according to a new study.

A team of scientists from Peking University in China have been studying the movement of the Earth’s mysterious interior by analyzing data on seismic waves from earthquakes that have broken through the Earth’s inner core.

By observing the changes in these waves, researchers can gain some insight into what is happening in the Earth’s inner layers.

The collected data details the change in seismic waves over many decades, from records in Alaska from the early 1960s to records collected in 2021.

The data showed that parts of the core that previously showed clear signs of change suddenly showed subtle changes around 2009, which they say suggests that the rotation of the inner core has stalled.

The scientists also found noticeable changes in the waves since around the early 1970s, which suggest this pause was part of a wobble that occurs every seven decades or so as the inner core gradually turns in the opposite direction.

The Earth’s internal structure can be roughly divided into four main layers: an outer crust, then a solid mantle, followed by a liquid-metal outer core, and a final iron-nickel inner core.

Since the inner core is separated from the rest of the solid Earth by a liquid outer core, it can rotate in different directions.

The rotation of the inner core is controlled by a magnetic field generated in the outer core of liquid metal.

Many researchers previously believed that the planet’s inner geologic layer rotated with the rest of the planet at a slightly faster rate than the surface, but this is now thought to be less linear.

Last year, research gave scientists reason to believe that the Earth’s inner core is oscillating, gently wiggling and spinning from one direction to another.

Interestingly, they found some unusual data from the early 1970s, exactly the same as in the latest study.

The results of the study showed that the inner core slowly moved in a different direction between 1969 and 1971, turning at least a tenth of a degree per year compared to the direction in which it moved between 1971 and 1974.

“We see the Earth’s surface shifting away from its inner core, as researchers have been stating for 20 years,” said study co-author and USC professor of geosciences John E. Vidale.

“However, our latest observations show that the inner core rotated slightly more slowly from 1969-1971 and then shifted in a different direction from 1971-1974.”

The strange movements of the Earth’s core may seem very far from us, but its behavior does have an impact on life on the surface.

The Earth’s core, especially its outer core, influences the planet’s magnetic field. Since the North Magnetic Pole was first recorded in the early 19th century, it has traveled about 2,250 kilometers across the upper reaches of the Northern Hemisphere from Canada to Siberia.

This flow is likely the result of two magnetic “drops” of molten material in the interior of the planet, causing a titanic shift in its magnetic field.

Space weather could cause train delays

Space weather could cause train delays 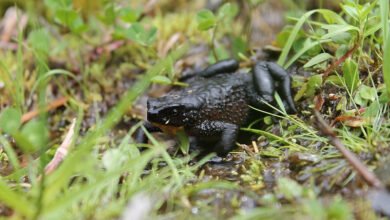 32 harlequin species were thought to be extinct, but they were just hiding from zoologists