US, WASHINGTON (ORDO NEWS) — Some time ago, a small asteroid flew around the globe, which became a satellite of our planet. Now, according to the latest information, the body’s trajectory has changed, as a result of which it has headed toward the Sun.

Astronomers note that the asteroid 2020 CD3 returned to the near-solar orbit, from where it arrived. Now the body “pursues” the Earth in an annual journey around the sun.

Body dimensions are comparable to a car, the object was first noticed in February. Then all scientists believed that the asteroid would get stuck in near-Earth space for at least a year, but guesses were not confirmed.

Bill Gray, a developer of body tracking software, noted that this year the asteroid most likely flew past Earth, but did not have enough energy to withstand its gravity. As a result, the body “lingered” around us for a while.

The asteroid was able to “borrow” energy from the Earth and the Moon, which allowed him to continue his journey. In the spring of 2044, the year 2020 CD3 should again approach the Earth. The distance between the globe and the object every 25 years with a high degree of probability will decrease.

In the Milky Way, astronomers have discovered an unknown cluster of stars

In the Milky Way, astronomers have discovered an unknown cluster of stars 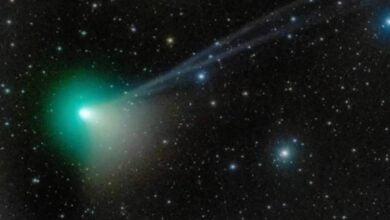