(ORDO NEWS) — Recently, several new cases of cattle mutilation have been registered in the world. The mysterious “predator” opened the carcasses of animals, cutting out their internal organs.

The “Predator”, which has very advanced technologies in its arsenal, was unstoppable, and dead cattle were found even in zoos.

Most injuries occurred in 1975 – 1976, the worst of them were found in the United States. The victims numbered in the thousands. In Colorado alone, an average of three cows were mutilated daily.

‘No logical explanation’ for livestock mutilations at Oregon ranch

Gov. Richard Lamm said at the time that the mutilations were “one of the greatest atrocities in the history of Western pastoralism.”

Once the buffaloes were mutilated in Cheyenne Mountain, where the US Air Force station was located at that time.

The predators were not stopped by the thousands of soldiers patrolling the area. The bloodless carcasses of animals remained a challenge that the Americans could not resist.

In 2009, the cattle mutilators returned. On March 8, near the Purgatuar River, Mike Duran, a cattle rancher, discovered a dead cow.

“She is an old cow, so I thought she might have died… I noticed her at the bottom of the river (Purgatuar), went and looked at her.

She was lying on her side, and it looked a little strange. When I looked closely, I saw that her udder was removed,” Duran said.

It looked like the udder had been cut off with a laser. There was no blood on or around the carcass, and the incisions were perfectly round.”

“We searched and searched, but we couldn’t find any blood on the ground or on the cow. I just can’t understand how someone can surgically remove a body part of an animal and not shed blood,” he said.

The absence of blood is one of the signs of an attack by invisible forces.” After opening the carcasses, veterinarians discover that there is not a drop of blood in them.

It is very difficult to bleed the animal, because when the arteries are opened, the veins close and trap the blood. Blood can be removed by pumping saline through the arteries, but this is difficult to do in the field. Rancher Tom Miller found one of his calves dead next to a feeder where cows gather to eat twice a day.

“This is the weirdest thing I’ve ever seen. I cut open the hide and the legs just fell off. All the bones were broken,” Miller said. “That’s what happens when a mutilated animal is dropped from above.”

There have been many cases where ranchers have found carcasses hanging from power lines or other places where the cow cannot reach on its own.

Animal tracks in the snow or in the mud suddenly disappeared, as if they had been lifted into the air. Coyotes and vultures did not touch the carcasses.

Miller said that about 10 years ago he found another of his cows mutilated. This cow had her ears, tongue, eyes and reproductive organs removed.

“I really don’t know what it is. I think maybe it was a UFO. Based on the circumstances, it looks like it,” Miller said.

On March 17, 2022, the night Miller lost his calf, a dark triangular ship flew over Colorado Springs. UFO researchers believe that this is not just a coincidence.

Not only in the USA

In Russia, mutilated animals, devoid of internal organs, were found in the Primorsky Territory and the Volgograd Region.

In 1987, a mutilated carcass of a cow was found on a collective farm in the Ural Mountains, and at the same time a UFO was observed in the same area.

On May 22, 2002, a letter describing strange events was published in the Krasnodar city newspaper Kuban News. The author’s grandmother heard her dogs barking at night and went outside to see what was happening.

All her dogs were looking at the rabbit shed in the yard. She found three strangled rabbits with their ears cut off. On the way to her house, the woman saw a bright ball flying out from under the cage with rabbits.

In 1996, Vladimir Chechurin, a hunter living in the village of Amga, Yakutia, lost his horse. A few days later the horse was found dead.

The bones of the horse were intact, but the internal organs – the heart and lungs were missing. The hunter recalled that a few days before the incident, he saw several UFOs in the area.

In France, a frightening series of livestock mutilations was recorded 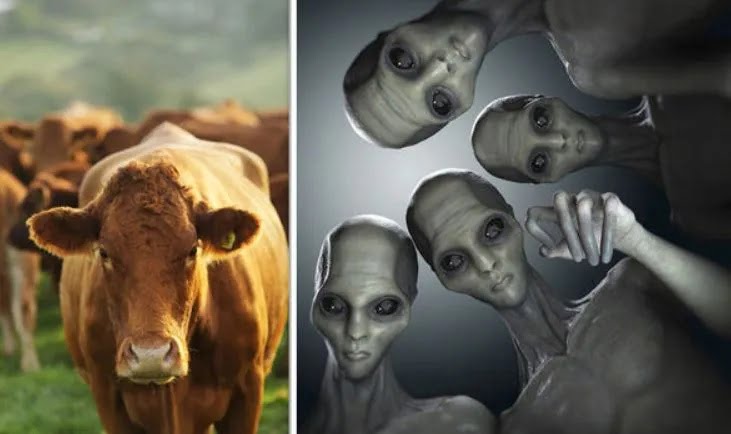 Most of the mutilations occurred in Argentina last summer near the city of Puelches, in the southwest of La Pampa. Farmers have reported seeing UFOs flying around farms and then finding mutilated livestock.

In Argentina found a cow with removed organs

The owner of the cow said he was in the backyard, accompanied by his son, when the night “suddenly turned into day” when a very large, bright object hovered over one of the cattle pens.

Frightened, both farmers entered the house and watched the UFO through the window. None of the animals on the farm were harmed, but livestock were soon mutilated.

Alejandro Napuri, a veterinarian, commented on a sensational case that occurred in one of the provinces of Buenos Aires: “… there was not a drop of blood at the scene of the murder. The tongue was torn out and the bone was exposed.

This is not easy to achieve. The observed incisions have nothing to do with a predator,” the veterinarian explained.

In June, several more mutilated animals were found near Puelches. Arancher from Embajador Martini, La Pampa province, observed panic in his herd when a UFO object “in the form of two soup bowls connected at the edges” flew over the animals.

Thirty years ago, the connection between UFOs and slaughter became more apparent. Flying saucer prints, circles of scorched grass, and increased radiation were found next to the mutilated carcasses. Some lucky ones managed to see the objects themselves at the crime scene.

The camera caught a UFO on a remote farm in North Dakota, USA

The most significant events took place at that time in Alaska. Five tourists camped near the Yukon River. One of them woke up early in the morning and went down to the river to wash.

During the walk, he saw about 20 orange “saucers” hanging. He hurried to tell his friends, but by the time they got up, the UFOs had already disappeared.

After walking half a kilometer towards the river, the tourists stumbled upon a giant ring of scorched grass. Inside the ring were four triangular imprints pressed into the ground by 2-4 centimeters.

Hundreds of dead animals lay around. The antlers and legs cut off from the moose were piled in separate piles.

All internal organs were missing. Grizzly carcasses were missing eyes and jaws, deer had skeletons. There was not a drop of blood, the wounds looked clean and tidy. A skinned whale carcass 14 meters long was found nearby.

For the most part, biologists and veterinarians who encountered strange phenomena did not comment. Sometimes the carcasses of mutilated animals decomposed extremely quickly. Sometimes they did not deteriorate even under the sun, as if they were embalmed.

They were made with a tool that did not cut, but parted the fabrics without damaging them. Scientists are unable to make such cuts in the field.

All attempts to photograph the “space fanatics” at work were unsuccessful. In 1995, a North Saskatchewan farmer told an investigator that he found a dead, unmutilated cow 500 meters from his home.

The investigator suspected that the killers would return to collect the internal organs. He set up a video camera on a tripod, which transmitted the signal to a TV with a VCR.

A few nights the camera worked well, but twice the image disappeared for about 12 minutes. In both cases, the carcass was severely mutilated, and the film had light streaks, as if a strong beam of light was directed directly at the camera.

Predators make no distinction between livestock and humans

The bad news is that the aliens prey on the people they deal with in the same way they butcher animals.

The only difference is that after the abduction and removal of organs and body parts, the “Predators” do not leave the body, as they do with animals.

The logic of such actions is quite understandable, it is one thing when a person simply went missing, and quite another when “space scientists” butchered him like a cow or a deer.

However, sometimes there are punctures as a result of which there are facts that people are treated the same way as with other animals. If you have the courage and strong nerves, you can read about one such fact:

Abduction of people by aliens. Murder of a man in Brazil in 1994 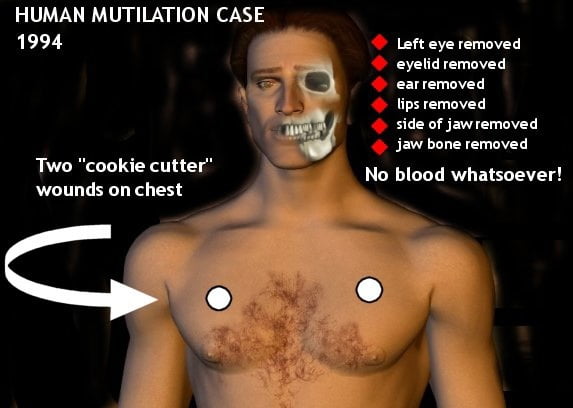 “Alien Harvest”: Why aliens are hunting for the DNA of earthlings

In the US state of Illinois, a camera trap filmed a “zombie deer”

Another mutilated cow found on a ranch in Central Oregon

Earth days are mysteriously getting longer

Earth days are mysteriously getting longer