(ORDO NEWS) — Employees of a network of medical institutions in Houston, the fourth largest city in the United States of America, told what is the difference between patients infected with the omicron strain and patients with the “delta” and “British” variant of SARS-CoV-2.

The authors of the first American peer-reviewed study of patients with omicron coronavirus at Houston Methodist Hospital identified their characteristic differences from patients with the “delta” or “British” variant (“alpha”). The report is published in The American Journal of Pathology.

In late February 2020, at the very beginning of the Covid-19 pandemic, The Methodist Hospital System in Houston, Texas, launched a massive population genomics project to sequence all SARS-CoV-2 samples taken from patients for treatment in local institutions.

The goal is to comprehensively trace the development of the epidemic in Houston, with a population of about 7.2 million people. It is the fourth largest city in the United States of America and the most ethnically diverse metropolitan area in the country. Today, the database stores samples of more than 70 thousand people.

After the waves of disease caused by the alpha and delta strain, it seemed to the authorities that the epidemic began to recede. However, at the end of 2021, “omicron” rapidly spread around the world.

From November 27 to January 5, The Methodist Hospital System in Houston, that is, in hospitals and emergency centers, registered 4,468 patients with symptomatic coronavirus disease caused by a new pathogen variant. By the end of the study, omicron was responsible for 90% of new cases of Covid-19. 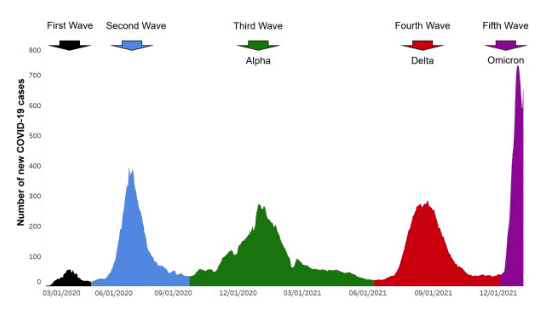 For comparative analysis, physicians also included in the sample local patients with alpha and delta strains who had previously received treatment. As a result, the study took into account information on 40,991 people.

The first case of omicron infection was detected at the end of November 2021, when delta dominated, during the same period there was a steady decrease in the total number of Covid-19 patients in the region. However, by December 23, genome sequencing data showed that Omicron accounted for over 90% of all new cases.

“The estimated doubling time in the number of cases over a three-week period was approximately 1.8 days, which means that the relative frequency of the omicron strain increased approximately three times faster than that of the delta variant,” the authors write.

At the same time, the vast majority of those infected did not leave the United States: that is, they became infected with the “omicron” inside the country.

In addition, they (infected with “ omicron ”) needed hospitalization less often, and if they got to hospitals for treatment, they spent much less time there: 3.2 days instead of 5.1 days in the case of “alpha ” and 5.4 days for “deltas “.

During the study period, 38 patients with the omicron strain died, that is, 99.1% recovered (against 170 who died with the British strain (94.6% survived) and 839 with the “delta ” (94.7% survived). Only one patient with “omicron” required extracorporeal membrane oxygenation (an invasive method of oxygen saturation of the blood), 49 – mechanical ventilation.

Experts have identified the creature found in 1975

Experts have identified the creature found in 1975