(ORDO NEWS) — Scientists have found an answer to this question as well.

Already from the second trimester of pregnancy, the expectant mother can feel the body movements of her child: how he kicks, rolls over and even hiccups. But can babies cry before they are born? While pregnant women don’t feel it, research shows that babies seem to start training their skills before they even take their first breath.

Ultrasound technology has allowed scientists to observe fetuses in the womb during development. For example, a video published in Archives of Disease in Childhood – Fetal and Neonatal Edition back in 2005 shows a fetus at 33 weeks of age, with facial expressions distinctly reminiscent of crying.

After the researchers conducted vibration and noise stimulation of the fetus, he opened his jaw wide, lifted his chin and let out three large breaths in a row. At the same time, his chest rose, and his head threw back, which was accompanied by a tremor of the chin. This movement was seen in ten babies (about 6 percent of all babies scanned).

Can we say that the baby was crying in the womb? It depends on what you call crying.
“If you use the term“ loud inarticulate screaming ”to express a strong feeling or emotion, then you can most definitely say that babies do not cry in the womb,” – Nadia Reissland, developmental psychologist at the University of Durham.

Naturally, in a fluid-filled amniotic sac, embryos cannot take a deep breath, fill their lungs and vibrate the air with their vocal cords. To do this, you will need to wait for the “release”! 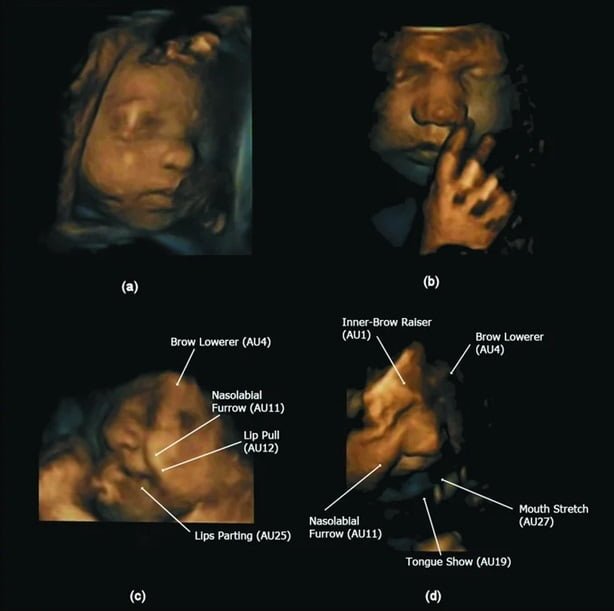 These kind of precursors of crying and laughing develop between about 24 and 35 weeks of gestation, and their expressiveness increases with the development of the fetus. According to Reissland, these movements are too subtle for the expectant mother to feel. But the fetus seems to at least “train” the facial movements of crying before birth.

It is not known if fetuses try to make sounds in the womb. Even if they managed to create a sound wave in the liquid, it probably wouldn’t be strong enough to pass through the amniotic fluid.

We also don’t know if these crying movements are related to fetal pain or discomfort. In Reissland study, these facial expressions were not a response to any stimulation from the researchers.

According to Reissland, babies learn to develop full-fledged facial expressions after birth in the social context of interacting with people. They don’t smile until about eight weeks old, but their faces learn to do this a few weeks before birth. Likewise, with tears, fluid from the eyes begins about four weeks after birth, when the baby’s tear ducts are mature enough to form tears.

The ultimate goal of the Reissland study was to help develop a useful tool for detecting developmental disorders and other health problems in the fetus in the womb.