(ORDO NEWS) — New scientific work has shown that when giant planets collide, their matter evaporates and cannot form a satellite like the Earth’s Moon, as the hypothetical planet Theia once did.

In such a case, neither habitable satellites nor even a “lunar protective effect for terrestrial life” is possible for super-Earths. It turns out that all this is real only for small planets like our Earth.

However, some scientists adhere to the opposite point of view: there was no Theia, and super-Earths are quite capable of forming large satellites. Who is right? 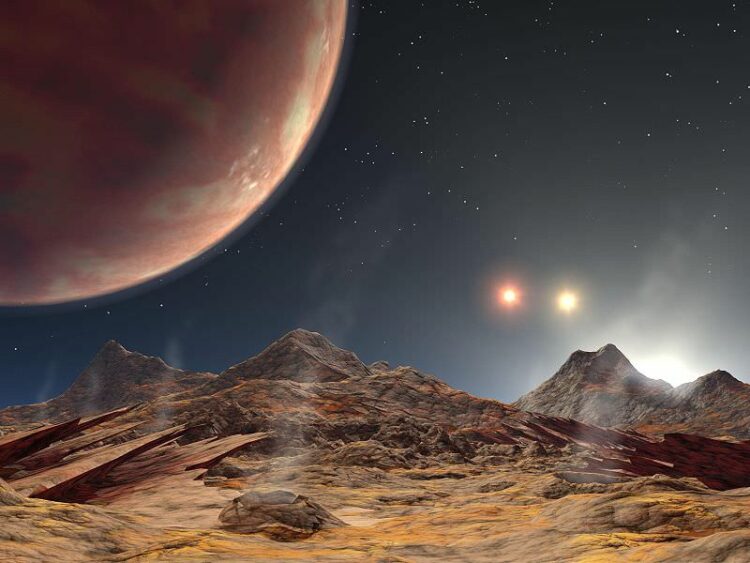 The stability of the climate on them ultimately depends on whether large exomoons can form near super-Earths. Does that mean habitability? / ©Wikimedia Commons

Thirty years ago, many astronomers came to the conclusion that a satellite in the sky of our planet is not just the most massive source of serious nighttime illumination, but something much more.

For example, the Earth’s Moon is credited with such an important role as stabilizing the tilt of the Earth’s axis of rotation. It determines, in particular, how much summer temperatures differ from winter ones, and the importance of stabilizing this slope cannot be overestimated.

If there were no Moon, the gravitational influence of Jupiter would change the tilt of the earth’s axis in a wide range – from zero to 85 degrees instead of the current stable 22.5 degrees.

The Earth would either lose the change of seasons, or “lay on its side”, because of which serious summer-winter fluctuations would begin even at the equator, and in high latitudes, it would be completely unknown what would happen.

Of course, the “earth’s axis” would fluctuate far from instantaneously , but in any case, the development of the biosphere would not proceed in the same way as in the real history of our planet.

This leads to the conclusion that in other planetary systems, the habitability of certain exoplanets may be associated with the presence – or absence – of large satellites. Moreover, three-quarters of the planetary systems in the universe are most likely located near red dwarfs.

And there, the distances between planets are often much less than in systems around bright stars. And fluctuations in the inclination of the axis of rotation under the action of large “neighbors” can be quite dynamic. So what about moons around planets around other stars?

Without Theia, a sustainable climate is impossible?

To clarify the issue, a group of astronomers from Japan and the United States decided to calculate how realistic the formation of exomoons – satellites of exoplanets – around the most common types of celestial bodies of “planetary” caliber.

In particular, they were interested in super-Earths – “solid” planets in size and mass noticeably larger than the Earth (but smaller than the gas giants). Today, the vast majority of solid planets outside the solar system are super-Earths, and they are still the most massive candidate for habitable bodies.

Alas, the conclusions presented in the work , which is published in Nature Communications, are disappointing. The authors proceed from Theia’s hypothesis , according to which the Moon was formed from a detrital disk with a certain amount of vapor.

If we are talking about a collision of two solid planets, then the vapor there will be mainly evaporated silicates (and other solid rocks). 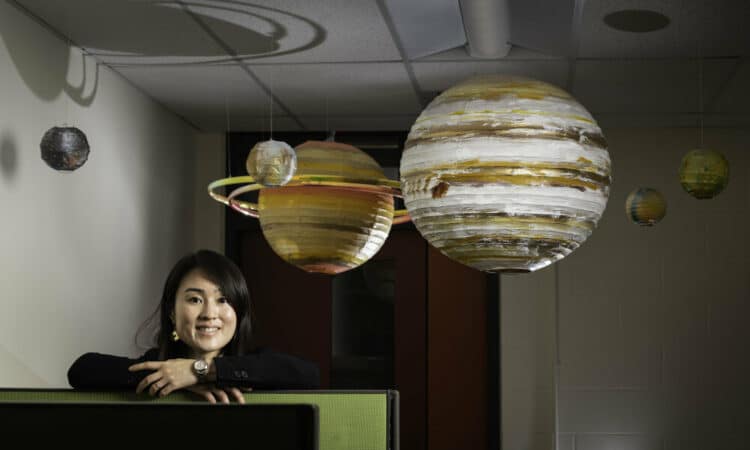 A similar disk is believed to have arisen after the collision of the hypothetical planet Theia and our Earth. So: the greater the mass of the colliding planets, the more evaporated substances will be in this disk and the less fragments of magma (liquid or – later – solidified). And the more steam in the disk, the stronger the braking that it gives to the liquid and solid particles of the disk.

Therefore, such fragments of the detrital disk after the mega-impact (giant collision) that gave rise to it will quickly slow down. And they will fall back to the planet, like about 40 Starlink satellites recently slowed down by the Earth’s atmosphere due to a geomagnetic storm.

For super-Earths with a mass of six Earth and more, the proportion of evaporated substances in the total mass of the protolunar disk should be, according to the calculations of the authors of the work, above 96%. In fact, there will be almost only steam, and that will quickly dissipate into space and not have time to form a truly massive Moon.

According to scientists, there are serious chances for the formation of large moons – and hence for a stable axis of rotation – for planets with a diameter of no more than 1.3 of the Earth’s. This severely limits the possible occurrence of exomoons and potentially adversely affects the climate stability of large exoplanets.

They honestly write: if Theia was small, like Mars, then the Moon and the Earth should be different in terms of the ratio of isotopes of different elements.

Since the substance of both planets could not effectively mix: the collision energy would be insufficient for their complete “spraying” into a cloud, followed by mixing and “condensation” already in the form of the Earth and the Moon. 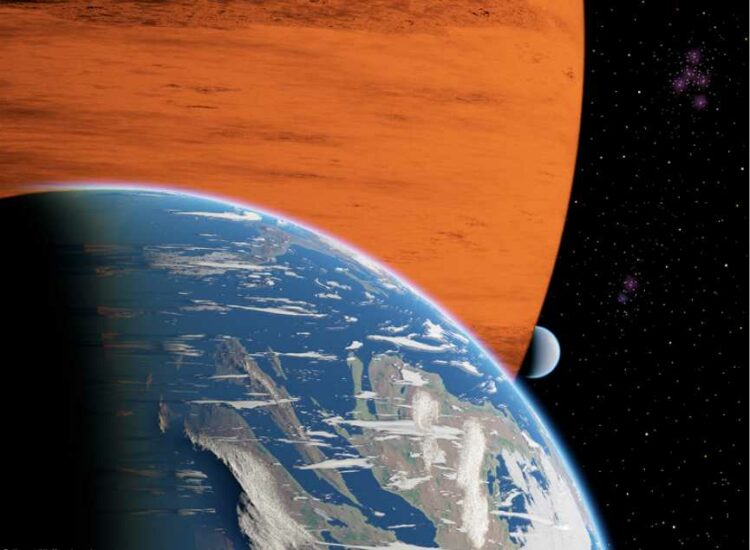 If the size of Theia was approximately the same as that of the proto-Earth, it turns out the classic “head was pulled out – the tail got stuck”. Indeed, such a collision has a much higher energy than in the version with a small Teia. But the angular momentum in the Earth-Moon system would be much higher than the one we see now. After all, they would then rotate at completely different speeds.

In this regard, the authors of the new work carefully mention the multi-impact theory put forward in 2017 by the Israeli researcher Raluka Rufu. True, Rufu put forward this hypothesis ten years later than its publication by the Russian scientist Nikolai Gorkavy (in Izvestia of the Crimean Astrophysical Observatory, back in 2007).

And 13 years later than the publication of the foundations of the hypothesis in the English-speaking world (in the Bulletin of the American Astronomical Society ). But since she is a Western scientist, of course, she has no way to find out about a publication in a Russian-language scientific journal (not all scientists read bulletins in English either).

Ensures their entry into a stable orbit around the Earth and further growth of the disk around the planet. Naturally, in the multi-impact scenario, there is no question of either a global catastrophic impact that evaporates everything, or the formation of a gas ring, so all the conclusions of the work under discussion hang in the air.”

Indeed: if the debris is thrown into orbit as a result of the fall of a body with a diameter of 10-100 kilometers, the collision energy will simply be insufficient to throw a noticeable amount of silicate vapor (and other solid compounds) into space. There are no vapors – there is no deceleration of debris by them, as well as factors that prevent the formation of a large satellite.

What is the real deal with exomoons in other planetary systems

Gorkavy also notes that so far almost no one has worked on multi-impact models for other planetary systems: the “canonical”, although incapable of consistently describing reality, mega-impact model dominates.

However, multi-impact theory already provides some general considerations about exomoons: “I believe that the probability of the appearance of satellites the size of the Moon near exoplanets with a solid surface remains approximately the same as in the solar system.” 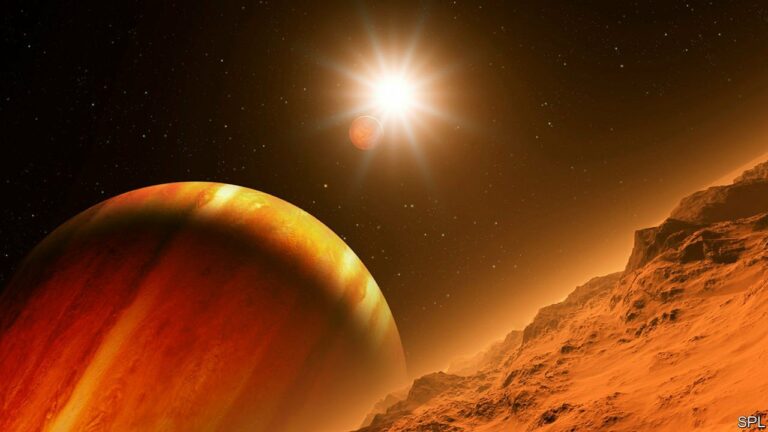 For the formation of satellites near terrestrial planets, nearby giant planets can pose a great threat. For example, Jupiter in the solar system not only deprived Mars of large satellites, but also made it ten times lighter than the Earth. Without this factor, the fourth planet of our system could well have kept water bodies on the surface and be inhabited at the earth level / © FL

In red dwarf systems – three-quarters of all the stars in the universe – the distances between planets, based on observations of astronomers, are often much less than in the solar system. Therefore, the question arises: does the gravity of other planets nearby prevent the formation of large moons near super-Earths?

Gorkavy comments on this as follows: a large number of planets in the system is not at all a problem for the formation of large exomoons.

After all, satellites like the Moon are formed deep in a potential well , literally at a distance of several planetary radii from the planet itself, so their orbits are extremely difficult to destabilize by external gravitational influences.

Now our Moon, for example, is much farther from the Earth than it was at the beginning of its formation. Similarly, the moons of red dwarf planets can move away from the host planet over time.”

But the scientist continues: “This process is very slow and optional, it depends on the rotation of the main planet. But the presence of giant planets in the system can be a minus: they cause a lot of perturbations, increased mass loss, and so on. Jupiter, for example, greatly reduced the masses of the satellites of Mars, and Mars itself was pretty “bitten”.

In this sense, a plus for systems like Proxima Centauri may be the absence of a giant planet in the system [as far as we know today], which negatively affects the growth of satellites in smaller planets.

Large moons – are they everywhere?

As Naked Science wrote , astronomers used to think the Moon was unique: until the 1970s, it was the only known example of a satellite that big compared to its host planet.

But then the situation changed: first they discovered Charon, a large satellite of Pluto. In the nineties, satellites were also recorded near asteroids – and, as we know today, there are many of them. Moreover, there are situations when an asteroid has more than one satellite comparable in size to it. 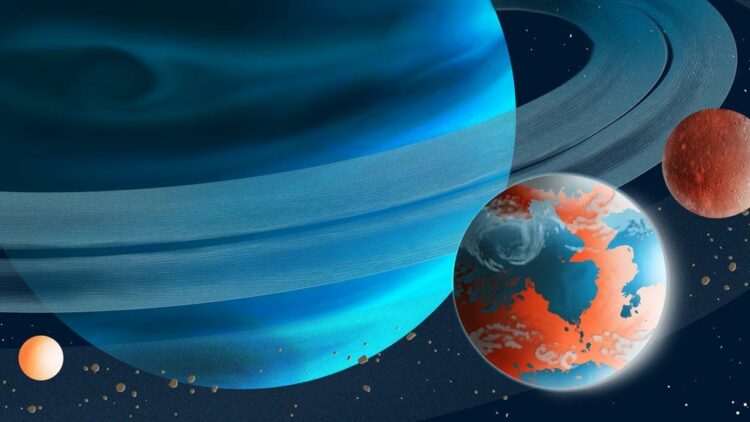 On the giant planets themselves, the multi-impact scenario does not directly work: debris from collisions cannot leave such a place due to its huge gravity. However, due to the gigantic mass of the host planet, even satellites that are small relative to the giant planet can potentially be large. And it is possible that even inhabited? / ©Wikimedia Commons

All this is quite logical: if a relatively large satellite is formed multi-impact, that is, due to regular collisions of its “parent body” with asteroids, then this should be a massive and regular phenomenon.

The work of Japanese and American astronomers has highlighted a new important difference between the multi-impact theory and Thei’s hypothesis: the latter, in fact, predicts a small number of exomoons, since it will be practically impossible to obtain them in the process of giant collisions of large planets. Too much energy, too much steam will blow the whistle, or rather, block the growth of large satellites.

All this means that as the discovery of exomoons near super-Earths is imminent, thanks also to the observations of James Webb, the multi-impact theory of the formation of the Earth’s moon will acquire one more good observational confirmation.