(ORDO NEWS) — We used to think that the dinosaurs that walked the Earth a long time ago are more like modern crocodiles, lizards, iguanas. In our view, these are reptiles with smooth skin, completely devoid of wool or feathers.

However, scientists have discovered something that can destroy this stereotype and change the idea of ​​living beings that inhabited the planet in ancient times.

Since the end of the 20th century, archaeologists have unearthed many dinosaur remains, confirming that some of their species had plumage.

Feathers are poorly preserved, which is why such amazing finds appeared late, because their detection is possible only with the use of modern technologies.

What was the delight of scientists when they found not fossilized remains, but a dinosaur tail with feathers on it in resin, an artifact that was practically untouched by time. 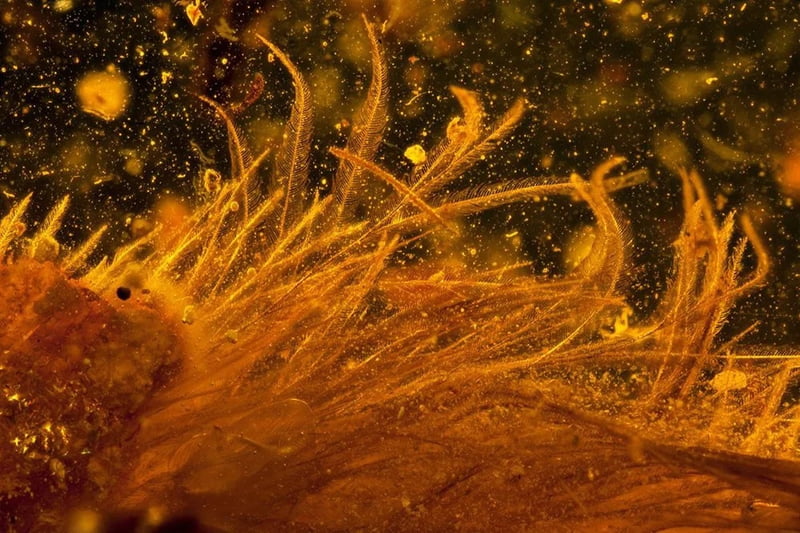 This amazing specimen was not found during excavations or scientific expeditions to lost places, but in the market of Myitkyina, a city in Myanmar. The seller did not even suspect the value of the item put up for sale.

The tail of a young Coelurosaurus is preserved in fossilized resin. Apparently, the lizard inadvertently stuck its tail into the sticky mass flowing down the tree trunk, and in order to free itself, it was forced to lose part of its tail.

It turns out that dinosaurs most likely looked like huge running chickens or flying birds. According to the analysis, the age of the find is at least 99 million years.

Coelurosaurs are the most numerous group of carnivorous dinosaurs, to which, in particular, the Tyrannosaurus Rex belonged.

Most scientists believe that all representatives of this group had plumage, and it could be bright. Thus, our idea of ​​​​the appearance of ancient (and maybe not so ancient) predators turned on its head.