(ORDO NEWS) — Astronomers have carefully studied the data of the Cassini probe and found out that the celestial body that was considered lifeless actually contains liquid water, but perfectly masks this fact.

Normally, planets or satellites that have large water oceans inevitably give out their presence by external signs. For example, on Jupiter’s moon Europa, there are practically no traces of ancient craters: cryovolcanism and surface ice movements caused by heat from the inner ocean seem to “level” the outer shell of Europa over time.

On the surface of the dwarf planet Ceres in the main asteroid belt, there are generally traces of salt water emissions. Therefore, it was traditionally believed that those celestial bodies that do not have cracks on the surface, traces of water vapor ejection, or traces of ancient asteroid bombardment, cannot have an internal ocean.

It seems that now scientists have found an exception to this rule. In the data of the Cassini probe, it was possible to detect information about slight oscillations in the axis of rotation of Mimas, a satellite of Saturn, during its journey around the host planet.

Mimas is sometimes jokingly called the “Death Star” because of the huge Herschel crater, 135 kilometers in diameter. It resembles the depression on the Death Star battle station from the famous movie, but there are differences.

With a crater wall height of five kilometers and a maximum depth of ten kilometers, there is a “mountain” six kilometers high in the center, and the Death Star in the movie did not have such an elevation. The satellite is 396 kilometers in diameter, and the question of something wrong with its orbital parameters arose several years ago, when the first analyzes of the Cassini data showed its strange fluctuations. 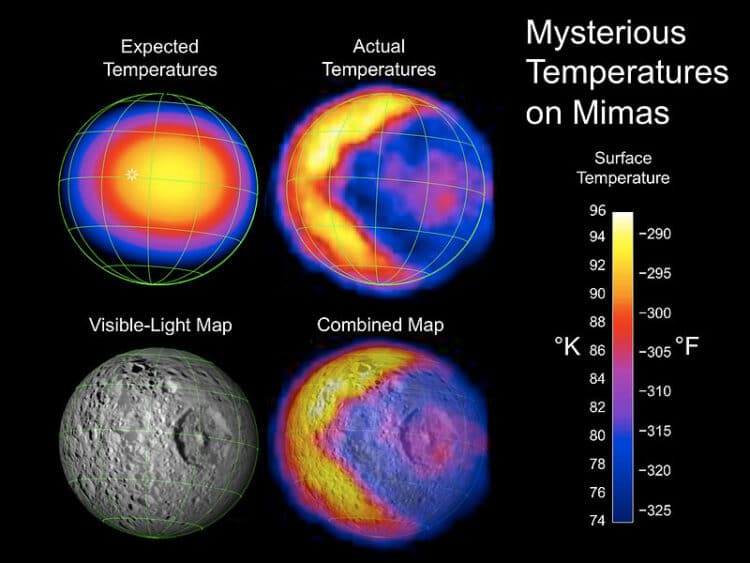 Nevertheless, according to calculations, it turned out that the presence of a liquid ocean there was, as it were, excluded. To keep the water liquid inside the satellite, it must be heated by a powerful tidal deformation from the influence of Saturn’s gravity.

But in this case, powerful tidal forces should have periodically deformed the surface of Mimas, leveling it. This means that ancient irregularities such as a crater will not be possible there.

Researchers at the Southwestern Research Institute (USA) tried to recalculate the data of the probe to see if it is possible that the tidal force from Saturn is strong enough to support the ocean inside Mimas, but not strong enough to keep its surface “young” and even.

It turned out that with a thickness of the outer ice shell from 20 to 32 kilometers, tidal interaction is really not enough to smooth out impact craters. In doing so, it would be warm enough inside the body that the inner 300 kilometers of Mimas would be mostly filled with salt water.

The importance of the discovery is not only that the relatively warm inland ocean means the possibility of life inside this very small satellite. It is also significant that there are many bodies of this size in the solar system in other places: for example, the satellites of Uranus in this case can also claim the “oceanic” status and all the same potential habitability.

Due to the large distance to them, it is impossible to accurately determine the fluctuations of their orbits from the Earth, but future space missions can clarify the orbital parameters of these bodies and answer the question of the presence of oceans there.