(ORDO NEWS) — Deviations of the actual average daily temperature in the region from the projected average temperature for the month from 1978 to 2018 around the world were accompanied by a decline in economic growth. In high latitudes and high-income countries, growth declined by about five percentage points, while in poorer countries and low latitudes, the decline was already 12 percentage points. The article was published in the journal Nature Climate Change.

In recent decades, the rate of climate change has been increasing across the planet, and in the future this could lead to a decline in the global economy.

Already, changing climatic conditions are affecting agricultural production, military conflicts, electricity consumption, migration and the number of suicides. At the same time, most of the research concerns long-term climatic trends, rather than short-term temperature deviations from the norm, the impact of which on the economy is much more difficult to assess.

Scientists led by Maximilian Kotz of the University of Potsdam assessed the behavior of macroeconomic indicators in 1537 regions of 76 countries against the background of climate change from 1979 to 2018. To do this, they focused on a conditional daily temperature anomaly, that is, the difference between the average daily and average monthly temperatures.

This indicator allows you to track climate change in more detail than the change in the average annual temperature. The authors used data from scientific publications, ERA5, the World Bank and ISIMIP, which included about 29,000 observations around the world. 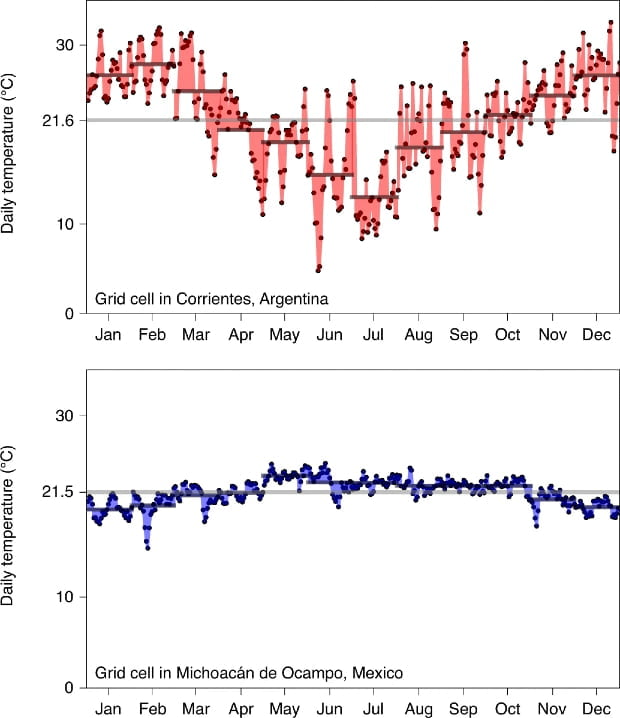 It was found that daily temperature variability has a linear negative effect on economic growth in all regions. At the same time, in countries such as Russia or Canada, where the difference between the temperatures of the hottest and coldest months can reach 40 degrees Celsius, the decline was only three percentage points. Colombia and Indonesia, where seasonal temperature fluctuations do not exceed three degrees Celsius, fell by more than 10 percentage points. Overall, the decline in economic growth ranged from 0 (in northern latitudes) to 12 (in low latitudes) percentage points, and was stronger in countries with low per capita incomes. 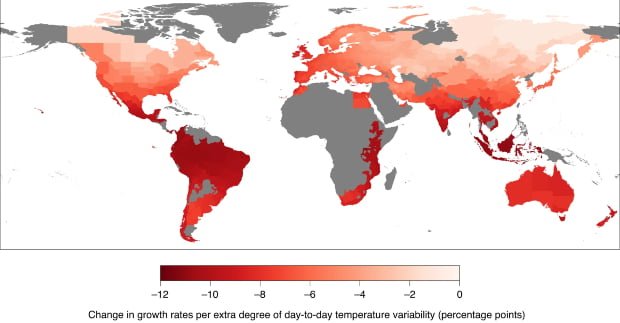 It also turned out that daily temperature variability during the winter months (in those regions where winter can be distinguished as a separate cold season) did not have a noticeable effect on economic growth. The authors suggested that economic institutions are well adapted to winter conditions and their fluctuations.

Scientists recently confirmed that tackling climate change is important for preserving agricultural land: if you do not limit anthropogenic greenhouse gas emissions, then by 2070 the planet will be losing 28.58 billion tons of top fertile soil annually.