(ORDO NEWS) — This is surprising, given that lacrimal fluid in mammals and reptiles is produced by different structures.

Most of us think of tears as a human phenomenon and as part of the complex fabric of human emotion. Above all, however, tears are intended for a different purpose: in all vertebrates, even reptiles and birds, tears are critical to maintaining healthy vision.

New research published in the journal Frontiers in Veterinary Science, shows that the tears of animals are not so different from ours. In fact, the chemical similarity is so great that the composition of other types of tears and how they are adapted to the environment may provide insight into the best treatments for human eye diseases.

Previously, scientists closely studied the tears of only a handful of mammals, including humans, dogs, horses, camels, and monkeys. In the new study, Brazilian veterinarians analyzed the tears of reptiles and birds for the first time, focusing on seven species: parrots – blue-yellow macaws ( Ara ararauna ) and blue-faced amazons ( Amazona aestiva ), barn owls ( Tyto alba ), road buzzards ( Rupornisirostris ), coal ( Chelonoidis carbonaria ) and loggerhead ( Caretta caretta ) turtles and broad-nosed caimans ( Caiman latirostris ). They all live in different environments and use their eyes in different ways.

Tears are 98-99% water, 0.9% inorganic, and 0.1% organic. They form a tear film on the surface of the cornea, sclera and conjunctiva, which contains many proteins, salts, antibodies and other compounds that help tears to form a protective layer on the surface of the eyes that destroys bacteria and protects the organs of vision from dust.

The study’s lead author Arianna Pontes Oria, a veterinarian at the Brazilian Federal University of Baia, says wide-snouted caimans can keep open without blinking for up to two hours. People, on the other hand, blink every 10-12 seconds.

To analyze the tears of caimans and six other species, Oria and her colleagues worked with 65 animals in captivity at a conservation center, animal care facility and commercial breeder in Brazil.

As required by various government animal welfare agencies, the team humanely collected tear samples from test strips or syringes from animals’ eyes, as well as tears from 10 healthy volunteers. Scientists used special kits designed to measure the amount of certain chemicals and compounds, such as electrolytes and proteins.

Surprisingly, given that birds, reptiles, and mammals have different structures for producing tears, tears of all species, including humans, had a similar chemical composition with the same amount of electrolytes, although the tears of birds and reptiles had slightly higher concentrations.

This may be due to their habitat, which necessitates higher electrolyte levels for better protection against inflammation.

Human tears, as well as those of caimans and barn owls, had higher levels of protein compared to other species. Such proteins are important for maintaining the stability of the ocular surface. Caimans and owls can have high protein concentrations because both species have large eyes and long blink intervals. Caymans also live with eyes immersed in fresh water for extended periods of time, which requires very stable tears.

Sea turtles had the thickest tears of any animal studied, so the researchers had to collect them with a syringe. “They live in salt water and therefore need tears that are adapted to this environment,” says Oria. The presence of very thick mucus in the tear film probably protects the eyesight of the turtles; without the thick film, their tears would be diluted and rendered useless.

Further study of the tears of wild animals, Oria and her colleagues hope, will help them to understand why during the course of evolution there were similarities or differences between representatives of different classes of vertebrates, as well as to understand what eye diseases birds and reptiles can suffer from.

“This is an important but little explored area,” concludes Oria.

The impact of solar emission on the Earth is recorded

The impact of solar emission on the Earth is recorded 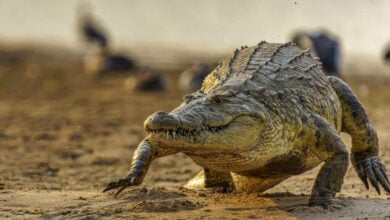