(ORDO NEWS) — You can stand with imperturbable calm on the edge of some ancient mountain settlement or on the roof of a majestic building and enjoy the view. But exactly until you remember the completely crazy stairs, along which you then have to go back.

Stairs, like any road, can leave memories no less vivid in your memory than the places they lead to. Some of them look so exciting, as if descended from the canvases of the surrealists, while others cause only fear.

Walking on ancient stairs is risky just because of their age, while many of their modern counterparts are specifically designed to be intimidating. 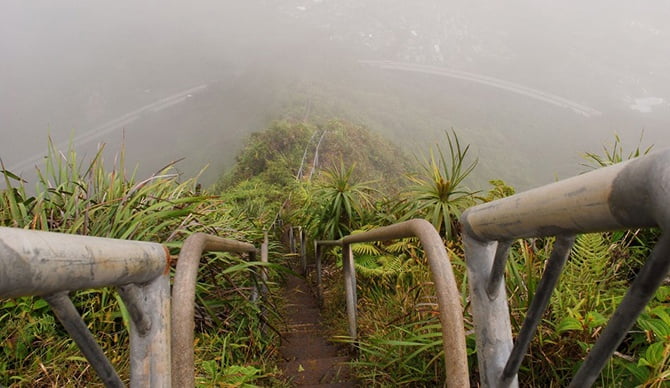 Can a staircase be so scary that it will simply be closed? Yes, the 3922 loose steps leading to the top of Kulau on the Hawaiian island of Oahu carry such great risks that it is literally illegal to climb them.

To the extent that there are guards downstairs who will not let you up. This staircase, called the “Stairway to Heaven”, was built by the US Navy in 1942 for laying communications during the Second World War.

In the post-war period, this route was chosen by hikers, but by 1987 it had to be closed for safety reasons. 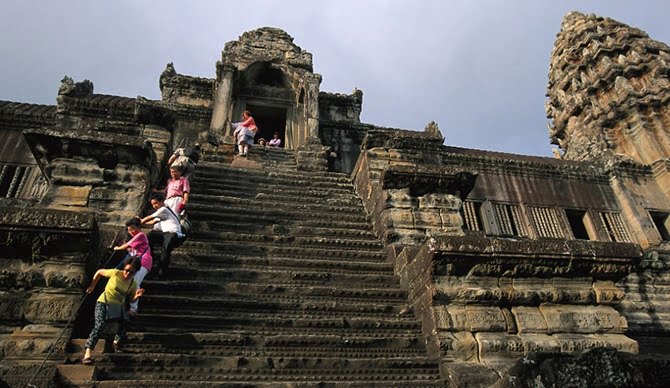 The temple complex of Angkor Wat in Cambodia is a symbolic place for Buddhists from all over the world. There is no shame in climbing the stairs leading to the highest temple on all fours or with the help of special ropes, because the slope at the stairs is about 70 degrees.

Local guides explain that the stairs were made so steep to remind people that getting to heaven is not an easy task. However, being at the top, you can think the same about descending from heaven. 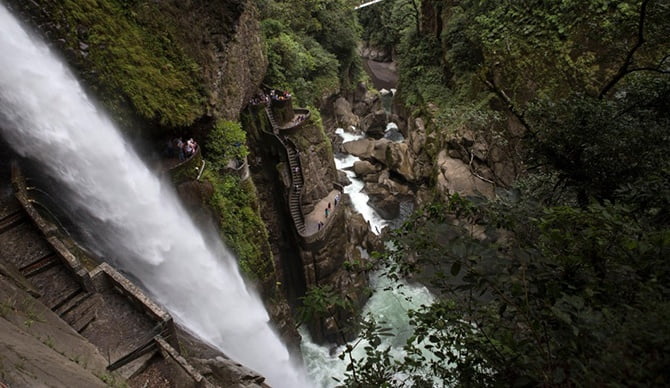 It’s nice to know that the staircase leading right up to the falls was built specifically to take in the tropical scenery.

But still, its name, which in translation sounds like a “devil’s cauldron”, was chosen for a reason, given that overcoming these steep steps can hardly be called pleasure. Due to the proximity to the waterfall, you can hardly find dry and non-slip steps, as well as metal railings and fences.

Rope ladder to the top of Half House, USA Do you know what lies between you and California’s most famous mountain peak, Yosemite National Park? A 10km hike through ever-increasingly steep wilderness, culminating in a climb of more than 100m straight up the mountain face via a cable ladder. No more than 300 people can walk along it a day, each of which is given a special permit. 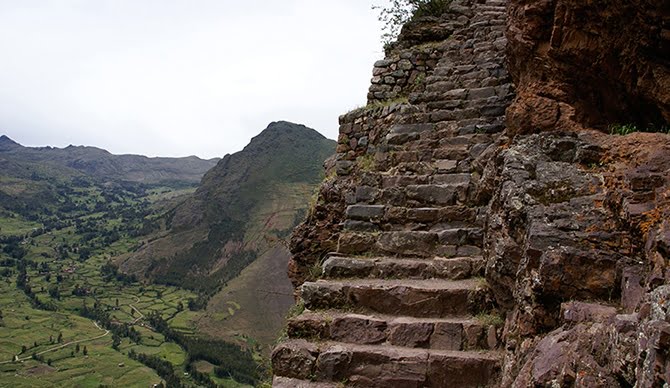 In Machu Picchu there is a stone staircase paved by the Incas about 500 years ago, leading up the Huayna Picchu mountain to the Temple of the Moon, which offers a beautiful view of the ruins of the ancient city.

The administration of the local park has set a limit on visits – 400 people every morning – and also reinforced the most dilapidated sections of the stairs with metal structures.

But you still need to be extremely careful, because on one side of the stairs there is a wet vertical wall, and on the other – an abyss leading to the Urubamba River. 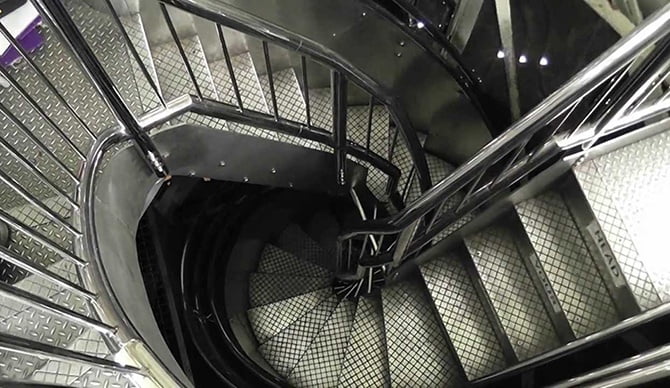 If you want to enjoy the view from the crown of the Statue of Liberty in New York and are claustrophobic, you’re in for a tough one.

The only way to get there is through a cramped double helix spiral staircase, where the distance from the steps to the ceiling is only 180 centimeters.

And it’s full of tourists. The most resilient can walk the full path of 377 steps, which is the equivalent of climbing the 20th floor.

But these rises are only a pleasant pleasure after passing the most severe test – getting a ticket to hit the crown. 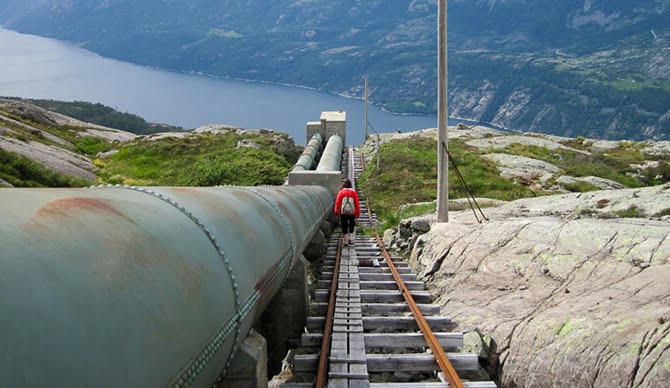 The Florli hydroelectric power plant in Norway is the starting point for an extremely exciting hiking route around Lysefjord, and the local stairs will make you nervous for two reasons.

Firstly, it has 4444 steps that go up more than 800 meters, and secondly, it is the longest staircase in the world, entirely made of wood. So you should pay special attention to every crunch and crack. 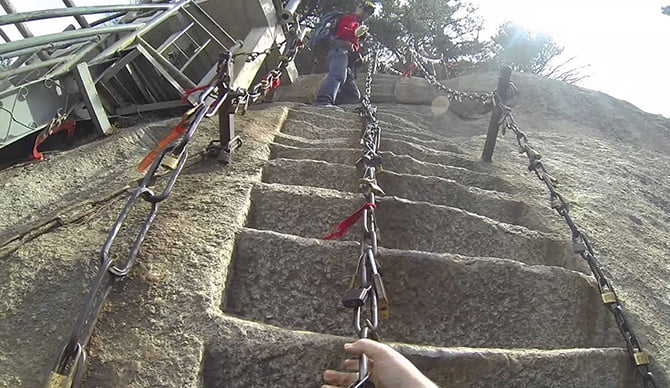 The exact number of steps carved directly into the surface of Mount Huashan, one of the five sacred mountains of Taoism in China, no one knows.

Probably because everyone who has ever tried to keep a score has lost it because of the dizzying conditions and the fear of death.

Once the vertical climb is over, you’re in for an equally hellish horizontal walk – a path just three boards wide, nailed straight into the vertical side of the mountain, and only one chain to hang on to.

After that – again a series of winding steps. When you finally reach the top of Huashan, you will know that “heaven” is a hard-to-reach tea house with an amazing view. 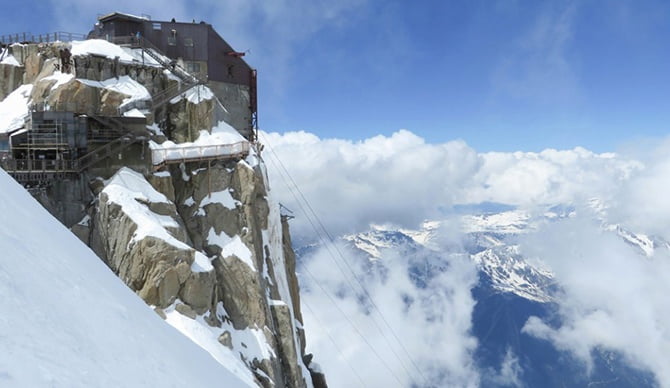 The steps of this staircase are comfortable, durable, have railings and are not overcrowded. The only thing that can make your heart skip a beat while climbing this staircase is its location on the highest mountain peak in the Alps. Strong winds and low temperatures go hand in hand. 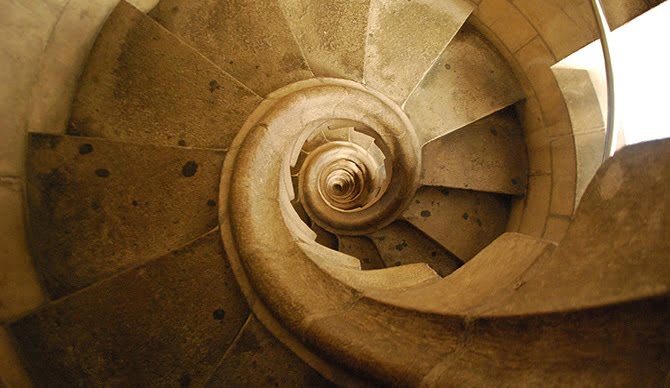 The spiral staircases of this Catholic cathedral look more like Slinky spring toys. Moreover, there is not even a railing that will protect you from falling to the base of this creation of the famous Antonio Gaudi.