(ORDO NEWS) — Researchers from Israel were the first in the world to create a three-dimensional neural network for the regeneration of spinal cord injuries.

The stem cell-derived implants made it possible to restore the morphology and function of the spinal cord of mice, thereby restoring their ability to walk. The authors expect to reach the stage of clinical trials in humans over the next few years.

Depending on the severity of the injury, STSI can lead to partial or complete disruption of the organ regulation systems, loss of sensation and motor functions of the limbs and body parts below the level of damage. Every year, 250,000 to 500,000 people in the world suffer spinal cord injuries.

Previously, a variety of methods for repairing an injured spinal cord have been proposed, including transplantation of various types of cells or biomaterials into the injury site in the acute phase (i.e., on the first day after ESRD).

However, all these attempts were unsuccessful, mainly due to two factors: first, the immune response to foreign cells, which results in transplant rejection; secondly, the implantation of cells that are not organized into a functional network and therefore unable to perform the necessary functions.

Researchers from the Sagol Center for Regenerative Biotechnology at Tel Aviv University (Israel) managed to solve both problems. To overcome the risk of rejection, it is proposed to use the patient’s own induced pluripotent stem cells (iPSCs).

This means that a sample of ordinary somatic cells will be taken from him (for example, in the described work – from the adipose tissue of the abdomen) and, with the help of genetic engineering, reprogrammed into stem cells, which will then be turned into spinal cord neurons. 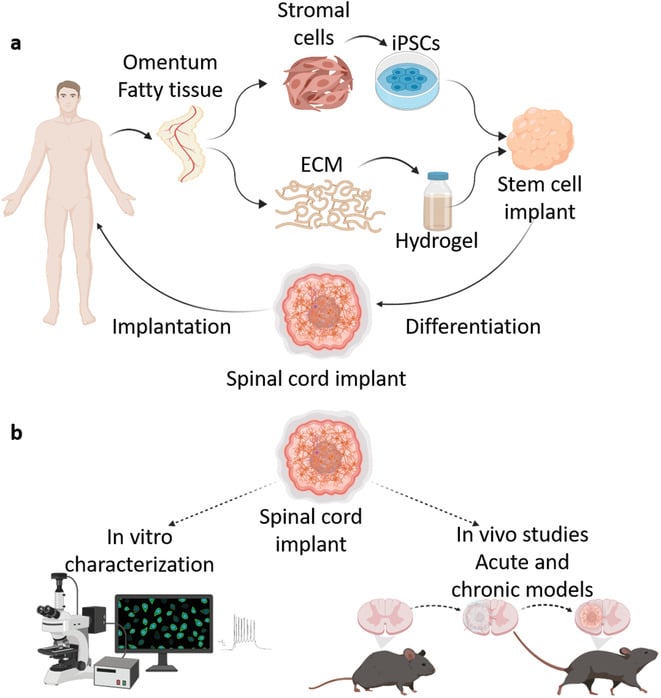 To solve the second problem – the formation of the correct functional network – the researchers developed a technique for creating a special personalized hydrogel based on the same sample taken from adipose tissue.

The hydrogel created in this way does not cause rejection during transplantation and, in addition, forms an ideal environment for the formation of a three-dimensional neural network containing motor neurons.

As a result, human spinal cord implants created in this way were implanted into laboratory models (mice) divided into two groups: those who were recently paralyzed (acute SCI model) and those who had been paralyzed for a long time, which is equivalent to a year in human terms (chronic SCI model).

After implantation, 100% of laboratory models with acute paralysis and 80% of models with chronic paralysis regained the ability to walk.

Professor Tal Dvir , lead author of the study, explains: “The model animals went through a quick rehabilitation process, at the end of which they were able to walk fairly well.

This is the first time in the world that cell-engineered implanted human tissues have been able to reconstruct an animal model with long-term chronic paralysis, which serves as the most appropriate model for the treatment of paralysis in humans.” 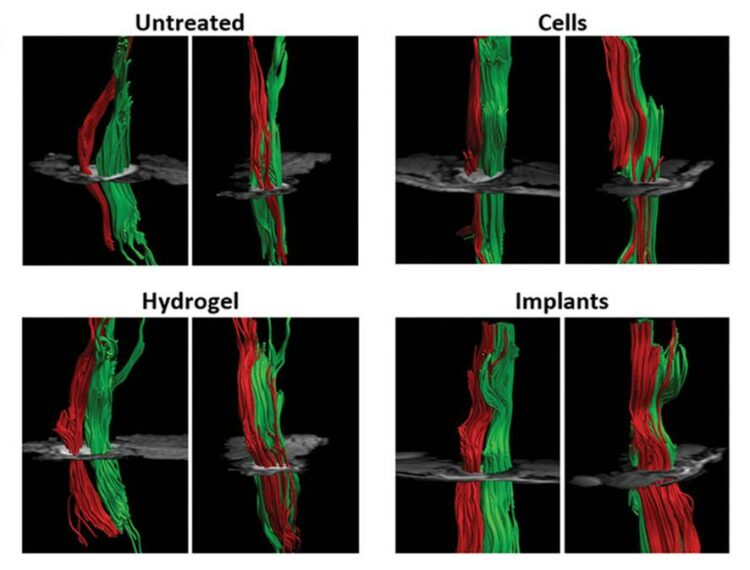 The authors of the work hope to reach the stage of clinical trials in humans over the next few years. The preclinical program has already been discussed with the FDA (US Food and Drug Administration).

“Because we offer cutting-edge technology in regenerative medicine, and since there is currently no alternative for paralyzed patients, we have every reason to expect a relatively quick approval of our technology,” summed up Professor Dvir.