US, WASHINGTON (ORDO NEWS) — The White House is trying to limit the spread of the coronavirus within it. But it is not easy.

The West Wing, epicenter of American power, is a place where social distancing is, de facto, very difficult to apply.

Monday, a few hours from a press conference in the gardens of the White House, Donald Trump did not address this subject that keeps America in suspense, anxious to project at all costs – and irresponsibly according to his detractors – the image of a country which has crossed the obstacle and which is restarting. 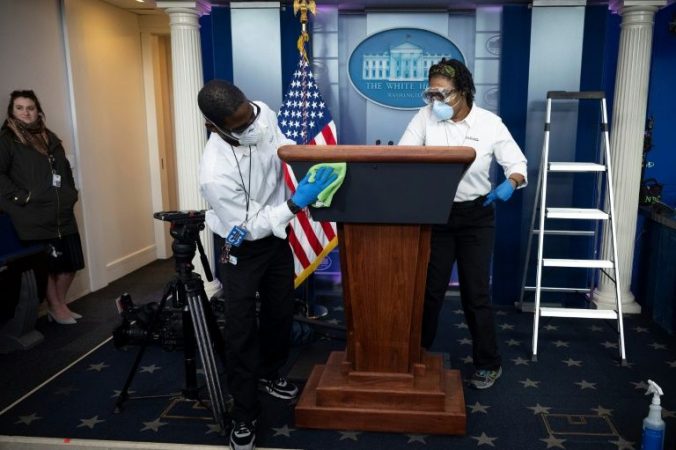 “Coronavirus numbers are MUCH better, down almost everywhere. Huge progress underway!” he said, at the heart of a resounding “Obamagate” scandal on which he did not provide any tangible information.

Through the distorting prism of cinema, the west wing of the White House often appears immense in the collective imagination. But this building, which houses the Oval Office, the workstations of the closest advisers, the press room and the offices of accredited journalists, is actually a small space in which everyone works very cramped.

Kevin Hassett, Donald Trump’s economic advisor, summed up this weekend the general feeling of a laconic formula: “It’s scary to go to work”.

“When I returned to work, I knew I was taking risks, that it would be safer to stay at home than to go to the West Wing which, despite all the tests of Earth and the best team which is still a place where everyone is relatively crowded, “he said.

The facts are there: the Covid-19 is approaching the president and the vice-president, his designated successor, who are now tested daily.

– No quarantine for Pence –

The new coronavirus officially appeared a few days ago in the places: Katie Miller, spokesperson for vice-president Mike Pence and wife of Stephen Miller, close advisor to Donald Trump, has been tested positive. A soldier also serving the President.

Three members of the White House crisis cell on the pandemic took precaution in self-isolation. Anthony Fauci, the world renowned epidemiologist who has distinguished himself in the fight against many viruses, from AIDS to Ebola, Robert Redfield, director of the Centers for Disease Prevention and Control (CDC), Stephen Hahn, boss of l Medicines Agency (FDA).

In an internal memo released on Monday, the White House called on everyone working in the West Wing to wear a mask when entering and working in the building, unless they are at their desk.

During “briefings” in the press room, all journalists, whose temperature is systematically taken before entering the White House, now ask their questions through their masks.

Unlike many world leaders, Donald Trump has so far chosen to never wear one, even on the road like last week in a protective equipment manufacturing plant in Phoenix (Arizona).

“Vice President Pence will continue to follow the advice of the White House medical service and is not under quarantine,” said his spokesman.

The United States is by far the most bereaved country in the world by the virus, with more than 79,000 deaths. And if the situation is slowly improving in New York, the main American home, the epidemic is struggling to slow down at the national level.

For Barack Obama, the results are clear: the management of the pandemic by the White House is an “absolute chaotic disaster”.