The boardwalk was built to protect the ancient footprints, according to the Bureau of Land Management, which denies that its backhoe messed up the tracks.

Visitors to the site last week reported the damage to the Mill Canyon Dinosaur Tracksite, about 20 miles (30 kilometers) north of Moab, saying the marks made by the heavy vehicle’s treads clearly lay on top of many of the dinosaur tracks, some of which are at least 112 million years old.

Several people posted photographs of the destruction and expressed their outrage on social media.

A public BLM proposal from October 2021 shows the boardwalk was starting to warp and had become a “trip hazard.” It’s not known when the construction work to replace the boardwalk started, but there was no public outcry until social media reports on Jan. 30.

The BLM proposal called for replacing the wooden boardwalk with a walkway made from concrete and metal that would “improve the safety of visitors,” and witnesses said the backhoe had dismantled sections of the old boardwalk and piled them beside the dinosaur tracks.

Utah’s state paleontologist, Jim Kirkland, told Science magazine that he had visited the trackway on Sunday (Jan. 30) and that the damage appeared to be confined to the perimeter of the protected area. He said no paleontologists were involved at any stage. “They didn’t talk to us,” he said. “This was a bureaucratic screw-up.”

The BLM’s Moab office has now halted the construction work and says the backhoe did not cause any damage: “The Moab Field Office is working to improve safe public access with an updated boardwalk that is designed to protect the natural resources of this site,” BLM officials said in a statement. “During that effort, heavy equipment is on location, but it is absolutely not used in the protected area.”

The Mill Canyon dinosaur trackway was discovered in 2009, and the site opened to the public in 2013.

The site also has rare fossilized evidence of animal behavior, including ancient crocodiles sliding on their bellies and a dinosaur swimming on an ancient lake bottom.

According to The Salt Lake Tribune, scientists who had visited the site had warned that the dinosaur tracks there were extremely fragile.

“It’s been known from the beginning that the track-bearing layer was hard but thin and brittle,” Lee Shenton, president of the Utah Friends of Paleontology’s Moab chapter, told the newspaper. “We had experts from China, Korea, Argentina, Spain, the U.K. and the U.S., and every one of them told us, ‘Don’t walk on this tracks layer any more than you absolutely have to because it will fracture under your weight.’ You may not see the fractures, but the next time there’s a freeze thaw, those fractures will open up, and the tracks will be destroyed.”

The BLM will not do any more construction at the Mill Canyon trackway until the investigation has concluded.

The Center for Biological Diversity, a nonprofit group based in Tucson, Arizona, has issued a cease and desist letter alleging the backhoe caused the “destruction of irreplaceable paleontological resources.”

According to witnesses, the letter said, “BLM construction equipment … had driven directly over the fossilized dinosaur tracks, permanently destroying as much as 30% of the site.”

The letter demands that the BLM in Utah “stop all activity” at the Mill Canyon trackway until the protection requirements of several federal laws are obeyed, including provisions of the Paleontological Resources Preservation Act, which states, “a person may not excavate, remove, damage or otherwise alter or deface … any paleontological resources located on Federal land.”

Found a species of dinosaurs that has sharply decreased in size

Found a species of dinosaurs that has sharply decreased in size 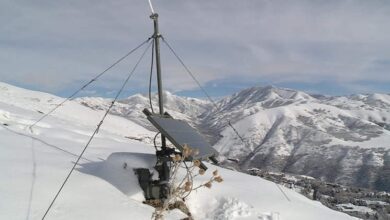 Mysterious solar-powered antennas appear in the foothills of Utah