(ORDO NEWS) — How we see and describe different colors varies greatly for many reasons, from the individual structure of our eyes to how our brains process images, what language we speak, and even whether we live near a body of water.

What color is the tree, or the sky, or the sunset? At first glance, the answers seem obvious. But it turns out that there are many differences in how people see the world – both between individuals and between different cultural groups.

How people perceive and talk about color is influenced by many factors, from the biology of our eyes, to how our brains process that information, to the words our languages ​​use to represent color categories. There is a lot of room for difference along the way.

For example, most people have three types of cones, light receptors in the eye that are optimized to detect different wavelengths or colors of light.

But sometimes genetic abnormalities can cause one type of cone to be different from another, or not present at all, resulting in a change in color vision. Some people are colorblind. Others may have a color superpower.

Our gender can also play a role in color perception, as can age and even the color of the iris. Our perception can change depending on where we live, when we were born and what time of year it is.

To learn more about individual differences in color perception, Knowable magazine spoke with neuroscientist Jenny Bosten at the University of Sussex in England, who wrote about it in her 2022 annual vision science review.

How many colors are in the rainbow?

Physically, a rainbow is a continuous spectrum. The wavelengths of light change smoothly between the two ends within the visible range. There are no lines or sharp breaks.

The human eye can distinguish many more than seven colors in this range. But in our culture, we would say we see seven color categories in the rainbow: red, orange, yellow, green, blue, indigo, and purple. This is a historical and cultural tradition.

Did you teach this to your children, who are now 10 and 5 years old?

I didn’t teach them anything about color because I was interested in seeing what they thought about it themselves. For example, my daughter, probably at the age of 5, said: “Are we going to the blue building?”. To me it looked white.

But it was lit with blue light. There’s also an anecdote I’ve heard – I don’t know if there’s any hard evidence for this – that children can sometimes first call the sky white and then learn to perceive it as blue. I was interested in seeing all these possible things in my own children.

Of course, most people around the world generally agree that there are primary, basic colors like red, yellow, and blue. Is not it so?

There are several large datasets examining the categorization of colors across cultures. And the consensus is that there are some commonalities. This suggests that there may be some biological limits to how humans learn to classify colors.

But not every culture has the same number of categories. Therefore, there is also an assumption that color categories are cultural, and cultures experience some kind of evolution in color terms.

A language may initially only make two or three distinctions between colors, and then over time these categories become more complex.

In some languages, such as Old Welsh, there is no distinction between blue and green – they are both categorized as “grue”. In other languages, there are two main color terms for blue.

Do native speakers who make this distinction really perceive colors differently? Or is it just a linguistic feature? I think the jury hasn’t decided yet.

In 2015, a heated discussion erupted on the network about the “Dress” and whether it was white and gold or blue and black. Why did people perceive it so differently?

Scientists are also very interested in this image. And a lot of research has been done on this topic: there is even a special issue of the magazine dedicated to the dress. There was a consensus that how you see a dress depends a lot on the kind of lighting you envision.

But then the question arises, why do some people believe that it is illuminated by a bright yellow light, while others – by a dimmer blue?

This may be your own experience with different lighting conditions and which ones you are more familiar with – whether you are used to blue LED light or warm sunlight, for example. But other factors can also influence this, for example, changes that occur with the eyes with age. 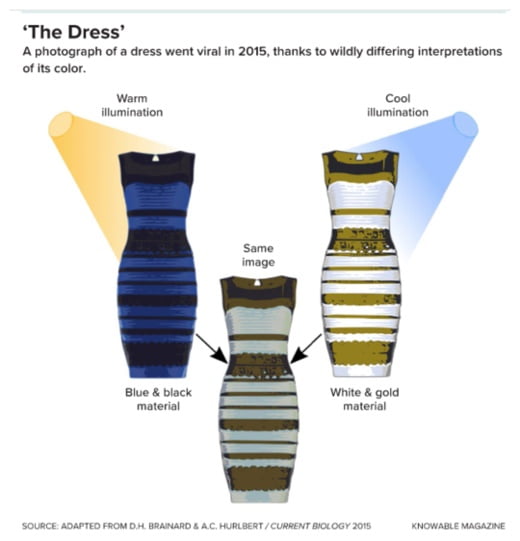 One of the most obvious reasons why people can see color differently is because their cones can be different: genetic variations are possible that affect the biology of the light detectors in the eye. How many such variations exist?

There are many, many combinations. There are three types of cones. We know more about variations in two of them: those that show long and medium wavelengths, known as L and M cone types.

Each of them has a light-sensitive opsin, a molecule that changes shape when it receives light and determines the cell’s sensitivity to wavelength. The genes encoding each opsin have seven regions in the gene that are polymorphic.

They can have different DNA letters. You can have various combinations of these seven options. Their total number is large.

One common variation is red-green color blindness. What causes it?

This is an anomaly in L or M cone types. In dichromacy – a severe form of red-green color vision deficiency – either L or M cones are missing, or they are present but not functioning.

Red-green color vision deficiency is also called color blindness, after John Dalton, an English chemist in the 1790s. It was not obvious to him that his color vision was different from most.

But he noticed a few instances where his descriptions of flowers differed from those of other people, but were in common with his brother. He thought it had to do with an extra filter in the eye. But then, many years later, other people managed to test his DNA, which showed that he was a dichromat.

In a mild form, anomalous trichromacy, you still have two different types of cones, but they are just much more similar to each other in terms of the wavelengths of light they are optimized to detect than normal. Thus, the range of perceived differences between red and green will simply decrease. 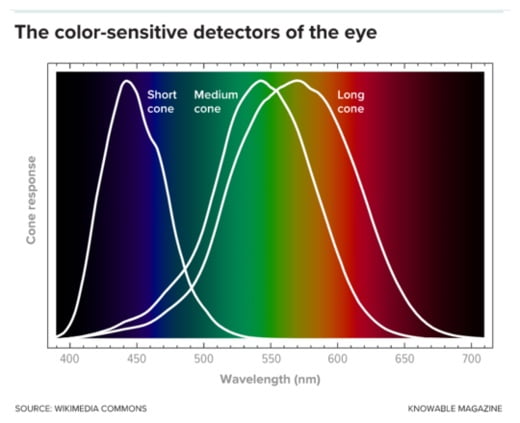 What does the world look like for those with a more severe case?

For a dichromat, in fact, there is no whole axis of color vision, and his color vision becomes one-dimensional. It is rather difficult to say what it looks like, because we do not know what the two poles of this dimension are subjectively.

What is preserved is the axis between purple and lime green in the normal color space. Therefore, it is often portrayed in this way. But in fact, it can be any two perceived shades. We just don’t know.

And in these cases, sometimes they see more on the dichromatic eye than we expect. But we don’t know if this is typical of a normal dichromat, who doesn’t have a trichromatic eye to help plug his brain.

Do these deviations from the norm always make the world less rich in terms of color? Or can some genetic variation really improve color perception?

Anomalous trichromacy is an interesting case. In most cases, color discrimination is reduced. But in some cases, because their cones are sensitive to different wavelengths, they can see certain colors that regular trichromats can’t. This phenomenon is called observer metamerism.

There is also tetrachromatism, where a person with two X chromosomes carries the instructions for both the altered cone and the normal cone, giving him four kinds of cones.

We know that this definitely happens. But we don’t know for sure if they can use this extra type of cone to gain an extra dimension of color vision and see colors that regular trichromats can’t or can’t see.

The strongest evidence comes from a test in which the observers had to make the mixture of red and green light match yellow; some people couldn’t find any mixture that matched the yellow.

They actually needed to mix three colors to get a match, not two. As if there were four primary colors for them instead of the usual three. But it’s hard to prove how and why this happens, or what exactly they see. 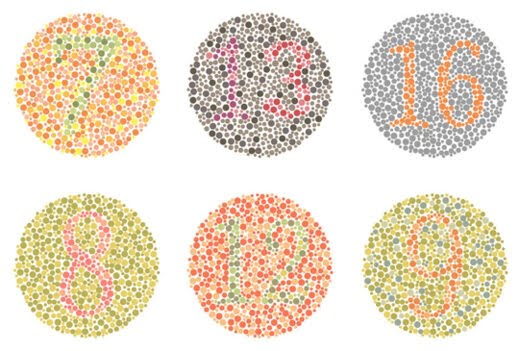 Do these people know they have super color vision?

The women we recruited were unaware of their color vision status. More than 50 percent of women have four types of cones. But, as a rule, the two of them differ very slightly, so this may not be enough to cause tetrachromatic vision.

Your own subjective perception of color is so personal that it’s hard to know how your color vision compares to the people around you. John Dalton was the first person to identify red-green color blindness, in 1798 – very recently indeed. He had a heavy type. But even that was not entirely clear to him.

Are there other biological differences besides genes that affect color vision?

Yes. The lens turns yellow with age, especially after age 40, and this reduces the amount of blue light reaching the retina. There is also macular pigment, which also absorbs short blue wavelengths of light. Different people have different thickness depending on what they eat.

The more lutein and zeaxanthin – substances found in vegetables such as leafy greens – the thicker the pigment. Iris color also has a slight correlation with color discrimination: It can be a factor in your very accurate color perception.

Does the world around us influence our color perception? In other words, if I grow up in a green jungle or a yellow desert, will I begin to see more colors in those regions of the rainbow?

Yes, it could be. And at the present time it is quite a hot topic of research in the science of color. For example, whether there is a separate word for green and blue depends on the culture’s proximity to large bodies of water, for example. Again, this is a linguistic thing – we don’t know if this affects their actual perception.

There is also a seasonal influence on the perception of yellow. In York, which is rather gray and gloomy in winter, and beautiful and green in summer, a study was conducted in which it turned out that the wavelength that people perceived as pure yellow changed depending on the season – slightly, but still noticeable.

The effect of the time of year you were born has also been noticed, especially if you were born in the Arctic Circle. It probably has to do with the color of light you are exposed to as you develop your vision.

Wow. There are so many differences, and it seems so difficult to sort through all this and understand whether these differences are biological or cultural. This really brings back to the philosophical puzzle: when I see blue, is it the same blue that you see?

Yes. I have always found color to be something very interesting, especially the subjective perception of color. It is still a complete mystery how the brain produces this. I have always wondered this question, long before I decided to pursue this topic academically.