(ORDO NEWS) — The origin of Saturn ‘s spectacular rings and its mysterious connection to Neptune may have a common explanation.

A new study suggests that Saturn used to have another large moon that at some point got too close to the gas giant and was torn into small fragments that eventually became incredible rings. Scientists named this lost satellite Chrysalis.

The famous rings of the gas giant also rotate in the same plane. At the same time, Saturn experiences precession – the planet’s axis of rotation regularly changes its direction in space in such a way that each of the poles describes a circle.

The coincidence was too intriguing, and the researchers tried to connect the two distant worlds. However, models have shown that the planets no longer interact gravitationally, as they did in the very distant past.

So what could cause Saturn to tilt in resonance with Neptune if the giants don’t interact?
According to a study published in the scientific journal Science, the missing satellite – Chrysalis – could provide just that.

In addition, the destruction of this hypothetical satellite could cause the formation of rings, which appeared relatively recently.

“The tilt is too great to be the result of known processes of protoplanetary disk formation or later major collisions,” said Jack Wisdom, a professor of planetary science at the Massachusetts Institute of Technology and lead author of the study.

Many explanations have been proposed in the past, but none of them are completely convincing. The cool thing is that the previously inexplicable young age of the rings naturally follows from our scenario.”

Based on the proposed scenario, Chrysalis had about the same mass as Iapetus , the third largest moon of Saturn.

The authors of the study suggest that about 150 million years ago Chrysalis passed the Roche limit and was destroyed by tidal forces. Large fragments plunged into Saturn’s atmosphere, while smaller fragments remained in orbit and formed a ring system.

“Just like a butterfly chrysalis, this satellite was dormant for a long time, and then suddenly became active and turned into rings,” Wisdom added. 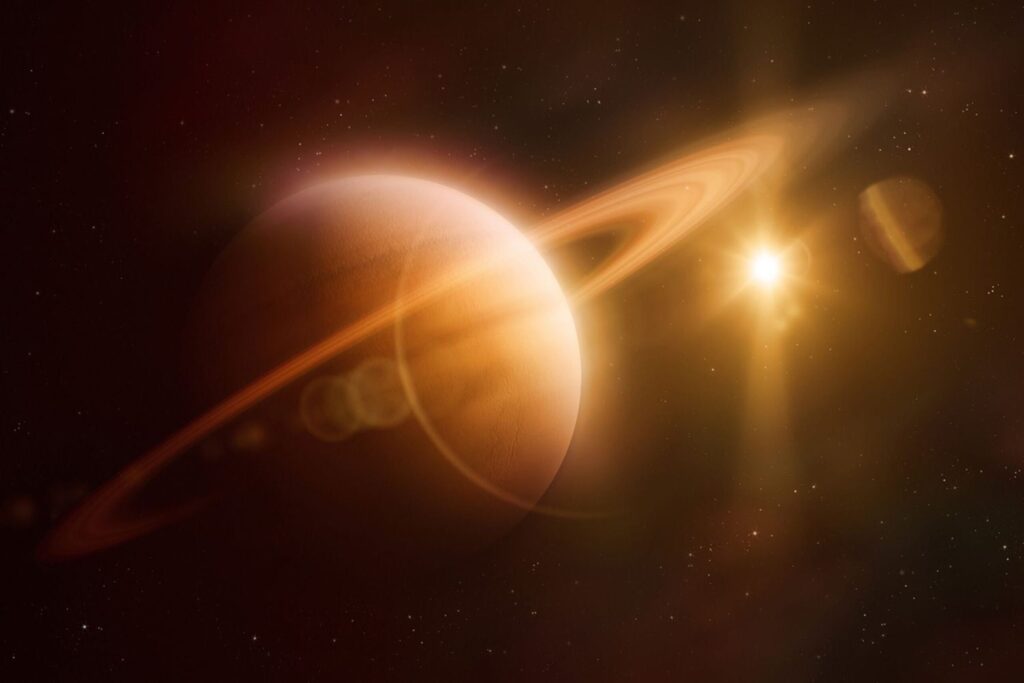 The decisive role in this study was played by data obtained by the NASA / ESA / ISA Cassini-Huygens spacecraft. On September 15, 2017, the probe plunged into Saturn’s atmosphere after spending 13 years in the gas giant’s system.

Cassini-Huygens measured the inertial motion of Saturn, which showed that the planet was once in resonance with Neptune. It was also found that Titan is moving away from Saturn, but much faster than expected: 11 centimeters per year.

This anomalous behavior of Titan could be explained if this largest moon of Saturn was once in resonance with another large moon that no longer exists.

“Titan’s rapid migration helps explain Saturn’s tilt,” added Burkhard Militzer, a planetary scientist at the University of California at Berkeley and co-author of the study.

The study is certainly exciting, but further data on the movement of Neptune and Saturn will be required to confirm the hypothesis put forward.