(ORDO NEWS) — The Chang’e-5 station was launched from the surface of the Earth satellite. Earlier, the Chinese National Space Administration said that the device had successfully collected soil samples.

The organization clarified that on December 2, at 22:00 pm Beijing time (17:00 Moscow time), the structure of the landing and take-off modules “successfully completed the packaging of samples.” The gravel collection work lasted 19 hours.

WOW! Moment of ignition of the Chang'e-5 ascent vehicle pic.twitter.com/e3VJM5qiGu

Recall that the Chang’e-5 station was launched to the Earth satellite on November 23 with the help of the Changzheng-5 heavy rocket. On the 28th, the spacecraft entered the lunar orbit. On the 30th, the lander and service module were separated, and on December 1, the lander landed on the lunar surface.

In total, according to previously announced data, “Chang’e-5” had to collect two kilograms of samples . Upon their return to Earth, the samples will be studied, allowing researchers to better understand the structure of the Earth’s satellite.

The next stage for the PRC in the framework of the lunar exploration is the Chang’e-6 mission. It should become China’s second unmanned return expedition. It is assumed that the probe will be launched using the Changzheng-5 launch vehicle from the Wenchang Cosmodrome (Hainan Island) around 2023-2024.

The success of “Chang’e-5” and “Chang’e-6” will allow the Celestial Empire to come closer to the main goal of its lunar program (in a broad sense) – the landing of taikonauts on the surface of the satellite and the creation of a scientific base on its surface. To implement all this, a new super-heavy launch vehicle Changzheng-9 is being created, as well as a promising new generation spacecraft.

Already, China is actively testing a new manned vehicle, which should replace the obsolete Shenzhou spacecraft, created on the basis of the Soviet Soyuz spacecraft.

The Chinese carried out a successful test launch of the ship in May this year. As a carrier, the Long March-5B rocket was used – a variant of the Long March 5 with increased carrying capacity. 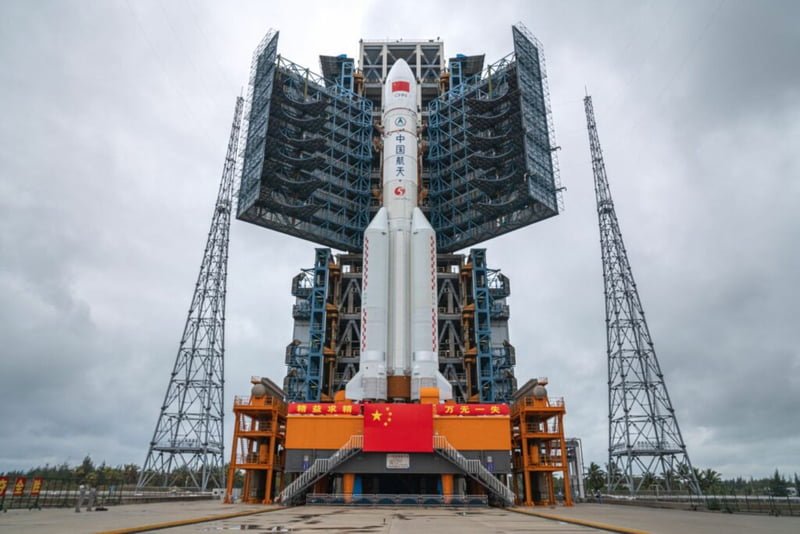 As for the promising launch vehicle Changzheng-9, it has yet to be created and tested. According to experts, this can be expected by about 2030.

The American “lunar” launch vehicle – Space Launch System – is at a higher stage of readiness and may make its maiden flight in about a year. So far, however, China still has a chance to bypass the United States in a new lunar race.