(ORDO NEWS) — A prototype of an electrolyser was demonstrated that does not degrade due to salts in sea water, effectively separating valuable elements from it – hydrogen and lithium.

Hydrogen is considered one of the most promising fuels of the future. Its combustion does not release greenhouse gases into the atmosphere.

However, “pure” hydrogen is obtained by electrolysis of water, decomposing its molecules under the influence of electricity, and this process is far from being so convenient.

It requires fresh water, the reserves of which are far from unlimited. If sea water is desalinated, then the energy costs for the whole process will be too high.

There are electrolyzers capable of working with sea water.

But the large amounts of salt it contains break down into its constituent ions in the process, and the resulting chloride leads to rapid degradation of the anode, requiring constant replacement.

The developers from Nanjing Technical University managed to solve this problem.

The electrolyzer created by them is capable of working with sea water for almost six months without interruption, releasing hydrogen and even lithium from it, another element that is in high demand today.

A key innovation in the device was the isolation that separates the salt water from the electrolysis system.

The anode and cathode, on which hydrogen and oxygen are released, are separated by a membrane, immersed in an electrolyte (potassium hydroxide solution) and surrounded by a thin layer of Teflon-based insulator.

The pores in the insulator are quite small and do not let the liquid inside, but remain permeable to individual water vapor molecules.

During the operation of the device, the concentration of the electrolyte increases, forcing water to strive through the membranes and pass inside.

This ensures a constant supply of clean water, leaving salts outside the system. 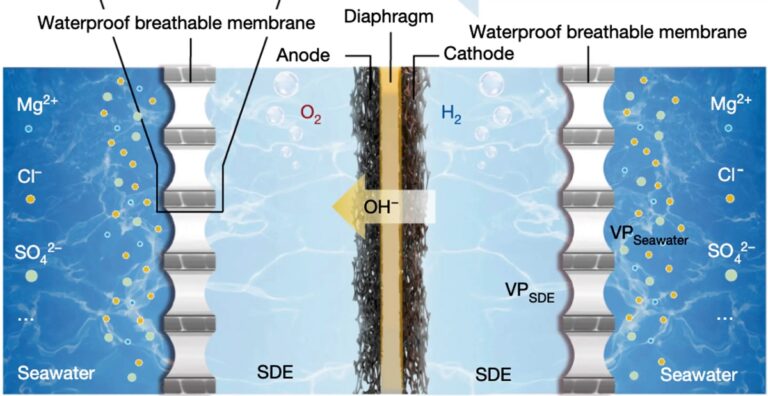 The authors assembled a prototype device, including 11 such cells, and tested it using ordinary sea water.

He worked without failures, without degradation of electrodes and membranes for 3200 hours (133 days), having produced about 386 liters of hydrogen (31.7 grams) during this time.

This is noticeably lower than most of the commercial electrolyzers in use today, but it is worth remembering that while we are talking about a prototype that can be optimized.

The developers also note that using similar devices, lithium can also be extracted from sea water.

Scientists have demonstrated that the operation of the electrolyzer gradually increases the concentration of these ions.

In a couple of hundred hours, it increases by more than 40 times, allowing lithium to precipitate in the form of carbonate crystals.