They turned off the bmp6 protein gene, which made it possible to breed a population of fish without muscular bones, capable of transmitting the mutation by inheritance. In the future, this may improve the quality of cyprinids grown.

Aquaculture, that is, the breeding and rearing of aquatic organisms, is an important part of agriculture as it is a stable source of protein for humans.

Thus, according to data for 2018, about 179 million tons of fish were produced worldwide, of which 82 million tons were aquaculture products.

China remains an important producer of fish, accounting for 35 percent in the same year. Moreover, more than two thirds of the fish grown in this country are cyprinids (Cyprinidae).

When growing fish, it is important that it meets certain qualities. However, there is a problem with cyprinids – a large number of muscular (intermuscular) bones.

They are located in the connective tissue layers between the muscle segments and join the vertebrae, ribs or upper arches.

These bones are difficult to remove and can be a problem both for eating and processing the fish. Herring fish (Clupeidae) have a similar problem. 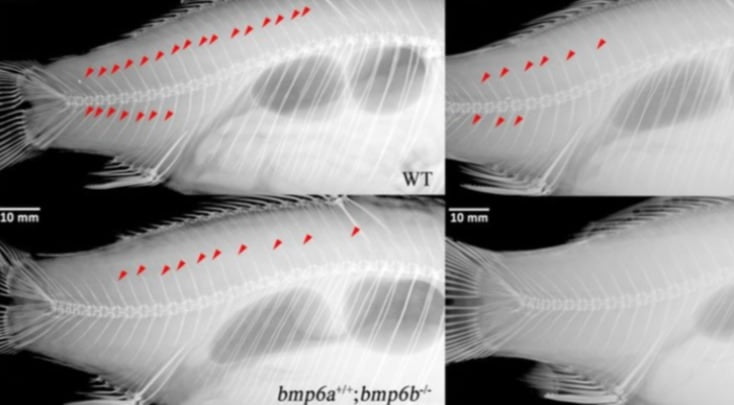 Xiaowen Sun, together with colleagues from the Chinese Academy of Fisheries, decided to get rid of the muscular bones in goldfish (Carassius auratus).

In one previous study, they were able to achieve this in zebrafish (Danio rerio) by turning off the gene that codes for the bmp6 protein using CRISPR / Cas9 technology (more on this technology in the “Remember these letters” material).

Biologists did the same manipulations with the embryos of goldfish. Next, the scientists selected individuals for natural reproduction, in which the mutation is present in 95 percent of the cells.

In total, they repeated this procedure two more times, noting that the frequency of mutations in the following generations of fish increased.

After breeding a population of goldfish without muscular bones, the researchers decided to test how their weight and body length grew compared to wild individuals.

They selected 600 one-month-old individuals weighing 3.65–5.02 grams and body length 4.44–5.32 mm and raised them in a pond for three months, following the changes.

It turned out that at the age of two to four months, the hatched population grew faster than wild fish.

In addition, the researchers analyzed the approximate composition of nutrients contained in the muscle tissue of the hatched population.

The results showed that no significant difference was observed in comparison with wild individuals.

They did not find significant differences when analyzing the structure of the muscle tissue of the two populations, and also noted that the deactivation of the gene encoding the bmp6 protein and the absence of muscular bones did not noticeably affect the fertility of these fish.

According to biologists, the bred population of carp fish without muscular bones is the first breed of this family in which this trait can be inherited.

In their view, this is an important achievement for aquaculture, which requires the development of high-quality fish, and reducing the number of muscle bones is one way to achieve this.