(ORDO NEWS) — The Chinese have begun testing an inconspicuous ship similar to the famous American destroyer Zumwalt. According to experts, we can talk about a technology demonstrator.

The original novelties of the Chinese military-industrial complex have long ceased to be something out of the ordinary, but the ship shown now can surprise even the most sophisticated audience.

The photo was posted on Twitter. Most likely, we are talking about a new warship built using stealth technology.

There is no confirmed information about him. H.I. Sutton, a well-known military observer and specialist in the field of naval forces, outlined his conclusions . According to him, it is unlikely that this is a full-size ship. No one doubts the potential of the Chinese defense industry, but the construction of a large ship would be hard to hide.

Perhaps we are talking about an experimental vessel designed to work out certain technologies that can then be used in the creation of “large” ships.

At first glance, the ship is difficult to distinguish from the famous American destroyer Zumwalt. Meanwhile, according to Sutton, it may have outriggers installed in the stern. Something similar is on the American unmanned ship Sea Hunter. 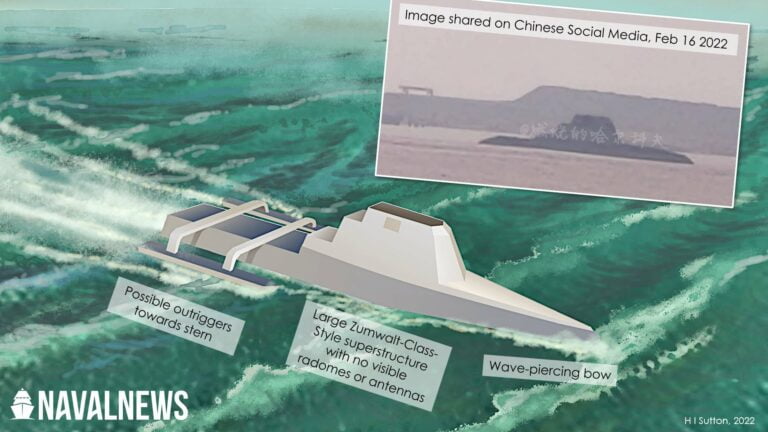 The “American” is relatively small: its total displacement is 145 tons with a length of 40 meters. The vessel is classified as a class III unmanned surface ship and designated as a Medium Displacement Unmanned Surface Vehicle (MDUSV). It is assumed that such ships will be able to search for and escort enemy submarines.

It is difficult to say whether in this case the Chinese followed the path of developers from the United States, but it is known that the Celestial Empire has been developing unmanned ships for a long time.

A few years ago, Beijing began testing the JARI-USV unmanned boat, capable of carrying a wide range of weapons and performing a variety of tasks (at least in theory).

It is also noteworthy that the telegram channel Dambiev described the novelty shown now as a “submerging patrol ship”.

Works in this direction are actively carried out in Russia. Recently it became known that the Rubin design bureau developed a new version of the Guardian submersible patrol ship. Its armament includes a small-caliber automatic cannon, two launchers for guided missiles and four 324 mm torpedo tubes.

Volcanic eruptions inevitably led to the collapse of the Chinese dynasties

US accuses China of cyber attacks on coronavirus research organizations

Volcanic eruptions inevitably led to the collapse of the Chinese dynasties

US accuses China of cyber attacks on coronavirus research organizations