(ORDO NEWS) — A careful study of the famous instruments showed that before varnishing them, the Italian master treated the wood with a composition of animal proteins, which filled in the smallest irregularities and improved the sound.

Antonio Stradivari from Cremona is considered an unsurpassed master of bowed musical instruments. The sound of his violins, violas and cellos is unique.

The most outstanding of them receive their own names, are preserved for centuries and are valued at millions of dollars.

It is not possible to repeat them even with the use of the most modern tools: many materials and techniques used by Stradivari remain a mystery to this day.

However, scientists are gradually revealing them. So, a few years ago, Taiwanese chemists identified a preservative that was used by a woodworker.

And now, a team of researchers from Italy has discovered another element that is characteristic of Stradivari instruments – a secret additional layer that remains under the lacquer.

The presence of this layer itself was known before. The master applied it before the varnish, filling in the smallest irregularities in the wood and influencing its resonance.

But what he made this composition from was still unknown. According to some reports, it was a material for additional drying of wood.

However, the work of Lisa Vaccari and her colleagues pointed to a completely different option. 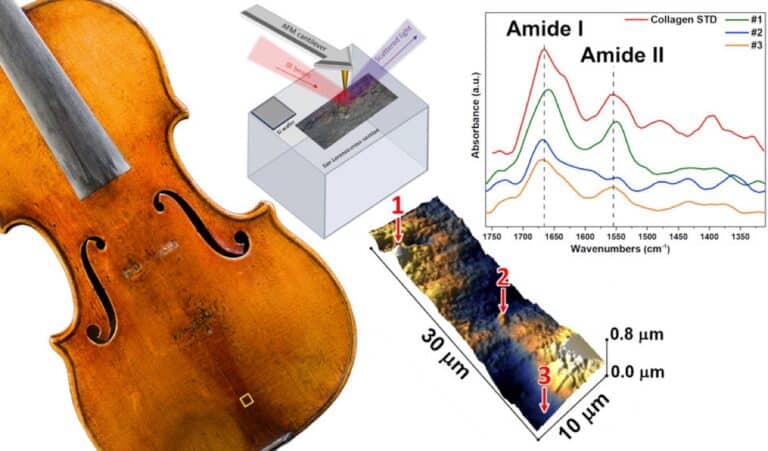 To determine its composition, chemists used the method of near-field infrared microscopy.

In this case, microscopic images of tiny areas of the surface are obtained, irradiating them in parallel with a narrow beam of infrared rays, the reflection of which depends on the bonds between atoms in the molecules contained in the sample.

Such work showed that the layer between the wood and the varnish was created on the basis of proteins, which, when processed, formed nano-sized clumps that filled the bumps.

They are so small that they do not even stand out above the surface on a micrometer scale. Judging by the fact that the results were the same for both instruments, Stradivari used this particular composition.

The specific set of proteins remains unknown, but it appears to include collagen, a common component of animal connective tissue.

Evidence obtained for the theory of habitability of the Enceladus ocean

Evidence obtained for the theory of habitability of the Enceladus ocean