(ORDO NEWS) — The oceans on our planet could not have arisen immediately after its appearance: it was too hot here. However, attempts to explain them by “cometary delivery” failed, the isotopic composition of our water is not the same as in comets. Until very recently, it remained unclear where, then, did it come from, making earthly life possible?

The Earth, like other planets, was formed by the collision and “sticking together” of small protoplanetary bodies, planetesimals . However, their collisions were accompanied by the release of huge amounts of energy – a ten-kilometer body, when falling, can give an explosion of 100 million megatons of TNT equivalent. Therefore, immediately after the formation of the planet, it was quite hot on its surface. In addition, the Earth’s orbit is close to the Sun, which in itself makes it difficult for water ice to accumulate on its surface.

All this led many scientists to assume that comets or icy asteroids brought water to Earth, which formed much further from the Sun, and therefore accumulated a lot of water ice. However, the ratio of deuterium (heavy hydrogen) and ordinary, light hydrogen on Earth is many times different from the same ratio in the material of asteroids and comets.

Some of the latter (comet 103P / Hartley) have a ratio of deuterium and light hydrogen relatively close to the earth’s, but the isotopes of other elements, such as nitrogen, they still differ sharply , that is, many similar bodies could not fall to Earth, and explain in this way terrestrial oceans are not allowed.

Previously, a number of researchers tried to offer another explanation: water was contained in some hydrated minerals inside the earth’s mantle. Over time, these minerals could decompose, releasing water, which is indeed typical of some magnesium and silicon compounds. However, as the authors of a new work in Physical Review Letters note , the proposed compounds often could not hold water at the temperatures and pressures that should be in the earth’s mantle.

Where did the water come from? Scientists offer to take a broader look at the issue and remind that in the first tens of millions of years after the formation of the Earth, its internal structure was not at all the same as it is now. Today, a third of the planet is an iron-nickel core, consisting of components much heavier than the silicates that form the mantle.

But at first, the planet inside was more homogeneous: the heavier metal components had not yet “drowned” in the planet’s core, and the lighter silicate components had not yet “surfaced” into the mantle and crust. This means that the silicates of that time were exposed to those temperatures and pressures that are now in the core, but which they are not subjected to today, “floating” into the mantle.

In the new work , scientists led by Xiao Dong (China) used the USPEX family of evolutionary algorithms developed by Artem Oganov (second author of the work) to calculate the properties of various compounds in order to find out which of them could contain water in the bowels of the then Earth. It turned out that there are only two suitable candidates, and both of them are modifications of the same silicate: α-Mg 2 SiO 5 H 2 and β-Mg 2 SiO 5 H 2.

The first remain stable at 262–338 gigapascals (approximately 2.6–3.4 million Earth atmospheres). The second is at pressures above 338 gigapascals. Both compounds are superionic conductors, that is, ions (in particular, protons, nuclei of hydrogen atoms) inside their crystal lattice migrate quite easily. Importantly, unlike earlier candidates for “water-bearing” minerals in the depths of the Earth, both of these compounds can remain stable at temperatures of thousands of kelvins, that is, they retained water even when they were in the center of our planet. 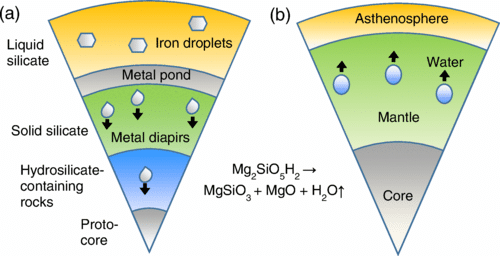 In a commentary for Naked Science , Artem Oganov notes that in the first tens of millions of years of the earth’s history, when molten iron descended to the center of the planet, displacing lighter silicates to a region of shallower depths, the predicted compound gradually began to decompose. The pressure in the mantle where they moved was too low for it to exist. Among the decomposition products, 11% by weight was water.

Once in the mantle, due to its low density, it gradually rose upwards, and with volcanic eruptions fell into the Earth’s atmosphere. So gradually the surface of our planet was saturated with water vapor, which then condensed, forming reservoirs.

The question of the origin of terrestrial water is extremely important for two reasons. First, without it, local life and we ourselves could not have arisen. Secondly, having understood how it arose on Earth, one can more or less clearly imagine which of the exoplanets discovered by astronomers in the “habitable zone” can be saturated with water, and hence potential life, and which are deprived of it.

According to Artem Oganov, the mechanism of the appearance of terrestrial water discovered “at the tip of a pen” does not work for the Moon or Mars. Even at the center of the latter, the pressure cannot exceed 37 gigapascals, which is several times lower than what is needed for the stability of the predicted silicates. Obviously, the water of Mars was formed in a different way, for example, it arrived with comets.

The scientist states that the new discovery is also important for planets outside the solar system. Super-Earths, which are noticeably larger in size and mass than our Earth, also have higher pressure in the mantle. This means that the minerals discovered by the authors of the new work will not lose stability even after iron and other heavy elements displace them from the core. This situation may to some extent limit the amount of water on the surface of such planets.

In the case of super-Earths, too much water might not be the best option for potential life. If all the surface water of the Earth is evenly distributed over its surface, the layer will be only about 3 kilometers. But super-Earths, thanks to slightly greater gravity, are better at holding light compounds, and in theory are able to accumulate oceans 100 kilometers or more deep.

An ocean that is too deep will create tremendous pressure, causing the water to become ice even if it is severely heated. Such exotic ice, as scientists call it, blocks the flow of minerals from the mantle, which depletes the global ocean of substances necessary for the development of life. If some of the water on such super-Earths is retained in the mantle, it could reduce the depth of the global ocean and improve the prospects for local life.