(ORDO NEWS) — When we talk about waves, we think of the gentle curves of water. Meanwhile, sometimes square “patterns” appear on the surface of the seas and oceans, fraught with potential danger.

On the island of Re in the Bay of Biscay (western France), one can observe an amazing picture: the waves there roll onto the shore not in parallel, but in an almost even “checkered” pattern. Scientists call this phenomenon cross-waves or cross waves.

The angle between them can be almost any – sometimes at 90 degrees. A similar phenomenon can be seen not only off the coast of France, but also on the beaches of Tel Aviv, the Azores and other coastal regions.

Cross waves have different sources. For example, the sea current can drive waves in one direction, and the wind in the other. It also happens that waves, diverging from two different storms, collide and overlap each other.

And sometimes the changed wind sets a new direction for the waves and they overlap the already formed ones. This phenomenon can be explained by the Kadomtsev-Petviashvili equation: it describes nonlinear waves in two-dimensional media with weak dispersion. 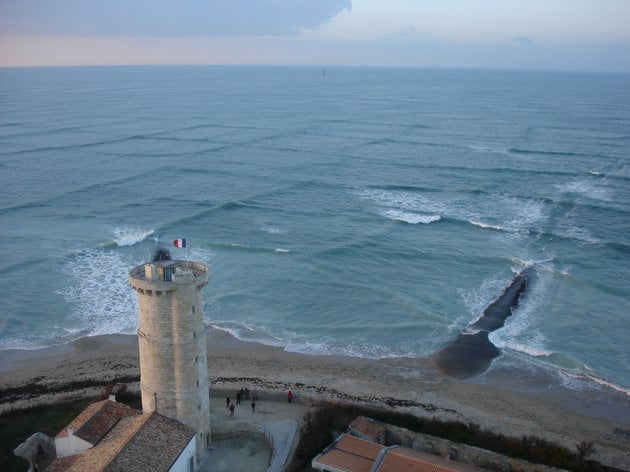 A special place among the unique waves from around the world is occupied by those that form near the small coastal city of Puerto Chicama in northwestern Peru.

Their distinctive feature is that they reach up to four kilometers in length. The waves off the coast of Puerto Chicama extend from an isolated rock outcropping to a long pier, splitting into several sections.

The first wave, Malpaso, stretches for 150 meters. It is followed by the 600-meter Keys (Keys), reaching deep waters, and the length of the next Point (Point) is more than a kilometer. The next waves get longer and longer until they reach four kilometers.

And although the cross surf in shallow water is not too high, it is risky to swim in it. Away from the coast, the waves are higher and are already dangerous for yachts and small boats.

The reason is that when rolling, crews usually turn ships perpendicular to the waves. However, in cross-wave conditions, such a maneuver is impossible, and therefore there is a chance that the wave will sweep over the side or even turn the ship over.