(ORDO NEWS) — These aircraft did a great job in the sky, but instead of ending up in a landfill, they got a new job on the ground.

Instead of pilots, visiting tourists now live in the cockpit, you will never see clouds from the windows, and under the wing you can easily find a barbecue grill or even a children’s sandbox.

We have found for you the most interesting retired planes and helicopters. Fasten your seat belts, we’re leaving! Perhaps, in the town of Rustavi, which is 11 kilometers from the Georgian capital, there is the best kindergarten in the world. Why? Yes, because it was housed in a real Yak-40, which once belonged to Georgian Airlines.

Everything is grown-up here: the cockpit, fuselage, landing gear, wings and ladders. There are swings and a sandbox under the wing, a huge number of toys in the cabin.

But can all this compete with real toggle switches and the steering wheel of the Yak-40? The group consists of only 15 children, the whole day is scheduled by the minute, it is very difficult to get into an unusual kindergarten – there are many who want to. This vintage 1965 Boeing 727 flew around the world for South Africa Air in its past life. Almost the entire fuselage of the Boeing literally takes off from the jungle, giving its guests views that will make them feel like they are flying.

The owners of the winged hotel saved the hard worker from being stripped for parts at the San Jose airport, moved to the coast, and then equipped with two bedrooms, bathrooms, a kitchen and a dining room.

Outside terrace overlooking the ocean and surrounding lush gardens. Also on site is an unusual cottage: a McDonnell Douglas MD-80 cockpit section with a king-size bed, no less than a royal living room, bathroom and kitchen. This 1976 Boeing 747-212B with 450 seats stands at the entrance to Stockholm’s Arlanda Airport. The plane was purchased in 2006, at the same time the cabin was completely dismantled and arranged in it as a full-fledged hostel with comfortable shared rooms and several double rooms.

In total, it fit 76 rooms, plus a unique suite on the site of the former cabin. The bathrooms are spacious beyond the plane, in addition, the owners managed to cram a cafe into the Jumbo Stay, where guests can buy breakfast. In general, this place has a lot of interesting buildings to accommodate guests, but we are interested in an old Bristol Freighter from the Vietnam War.

The owners of Woodlyn Park turned it into a two-room mini-hotel, one of the guest beds of which is located directly behind the backs of the seats of the first and second pilots.

In terms of amenities, the aircraft is well equipped, given its small size: a shower room with a toilet, a kitchenette with a gas stove, microwave and refrigerator. Directly opposite the Zurich airport, in a specially erected hangar, the Runway 34 restaurant is located with the Soviet Il-14 in the very center.

Visitors can sit at a table both next to the aircraft and in its cabin, while the entire restaurant (and the aircraft itself) is divided into zones where dishes from different cuisines of the world are served. And on the site of the former first-class cabin in this IL-14, the owners made a cigar room. A 1982 Westland Lynx XZ676 helicopter that has been converted into a hostel is parked in Ream Hills, next to Blackpool Wake Park in Lancashire.

Its simple but clean interior can accommodate four people, for the convenience of which there is a small kitchenette with a mini-fridge and microwave.

In the cold season, the fuselage is heated by electric heaters. The only amenities are a flat-screen TV in a small seating area. The downside is that the shower and toilet are across the street from the helicopter, but there are pluses – amenities are included in the price. In a quiet place called Stirling, in Scotland, there is a solid but decommissioned Sikorsky Sea King. Its converted cabin can accommodate up to five people: two on a double bed in the cockpit, a couple more on a folding chair that converts to a double bed, and one person on a bed in the tail. Also on board is a small kitchen, bathroom and seating area overlooking the Forth Valley. Here Sikorsky Sea King Pelican HH3F 1968, which served in the Coast Guard, is not on the street, but indoors. More precisely, inside an elite cottage for daily rent, in which a helicopter body with huge blades is built.

A bathroom with a toilet, a king-size double bed and all other amenities are taken out of the Sikorsky, and only a modest kitchen and a couple of seats are located in the fuselage. In general, the helicopter in this guest house serves more as an art object, its functionality is very limited.

Why do passenger planes fly at an altitude of 10 kilometers

How planes manage to hover in the air

Why do passenger planes fly at an altitude of 10 kilometers

How planes manage to hover in the air 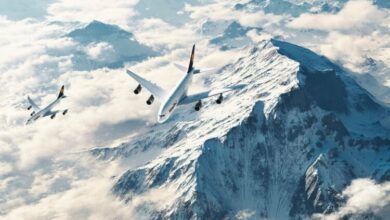 Why don’t planes fly over the Himalayan mountains? Why Mars helicopters like Ingenuity could glow in the dark