(ORDO NEWS) —  40 harmful bacteria were found in the bays of the Black Sea. Some of them release a neuroparalytic poison called saxitoxin.

We asked the toxicologist and academician of the European Academy of Natural Sciences (EAEN) Mikhail Kutushov what danger these substances can pose to humans.

According to Kuleshov, these are poisons of plant origin. Their appearance in water is facilitated by the pollution of the sea and rivers that flow into the sea, with all kinds of decay products, toxins and industrial emissions.

“And all this as a result of the fact that this is a bay. There is no such circulation as in the sea, the water does not have time to clear itself.

Therefore, bacteria develop there, which causes the death of marine fish, ”says Mikhail Kutushov, Academician of the EAEN.

Saxitoxin, which is found in the Black Sea, along with tetrodotoxin and conotoxin, is called “rapid death factors”. These are very strong poisons. Plankton, sea mussels and scallops accumulate them. If a person consumes a large amount of marine products containing harmful substances, then he may die.

“There have been cases of mass deaths of people from the fact that they ate bivalve mollusks. But since their concentration (poisons – Ed.) is not very high in the Black Sea, there will be skin itching, ringing in the ears, numbness and diarrhea may appear. Usually, toxin poisoning goes away on its own if a person drinks well or flushes the stomach, ”said Kutushov.

To prevent the appearance of harmful bacteria, it is necessary to detoxify, that is, clean both the bay itself and the oceans.

“Humanity has accumulated a huge amount of toxins and nature suffers greatly from this. Toxicology, it mixes with living matter and chaos is formed. As a result of this impact of human anthropogenic impact, the flora changes in the seas, and in the oceans, and in the bays, ”says Mikhail Kutushov, Academician of the EAEN.

Kuteshov also proposes to carry out certification of the land, where the area is most affected by what toxins.

“People must take on the whole world to clean up the planet, otherwise we will not be very good. All water will again be covered with cyanobacteria. Let’s hope that humanity will come to their senses and take up their heads.” 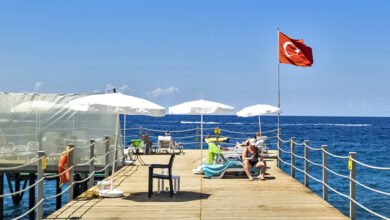