(ORDO NEWS) — The British company Invisibility Shield Co has developed a panel that makes objects invisible to an outside observer.

One of its creators spoke about how this innovative technology was developed in an interview with the Metro news agency.

Invisibility Shield Company, based in London, has developed a panel measuring 60 by 90 centimeters. Innovative technology also allows a person to hide in it.

One of the developers named Tristan Thompson said that the mirror shield is a product of the Internet. Many users of Internet forums, including himself, experimented with the development of such a tool, shared ideas and demonstrated rough prototypes.

Over time, the development of such glasses lost their relevance, but Thompson and his associates were determined to bring their idea to the end.

At the end of last year, they managed to establish a production process and they made what they believe is the best invisibility shield ever created. The developer explained that their shield works best on uniform surfaces such as foliage, grass, sand, sky, and asphalt. It also works effectively on the horizon, walls, railings and drawn lines, at any time of the day and at any distance.

However, there are some exceptions. For example, on bright sunny days, glare can be seen on the surface of the shield.

Also, clouding will be noticeable on the glass if the “shield bearer” wears clothes that differ in brightness from the environment.

In an environment where vertical lines are clearly visible, the user will need to rotate the shield 90 degrees and adjust their position so that the background is properly reproduced on the front of the shield. 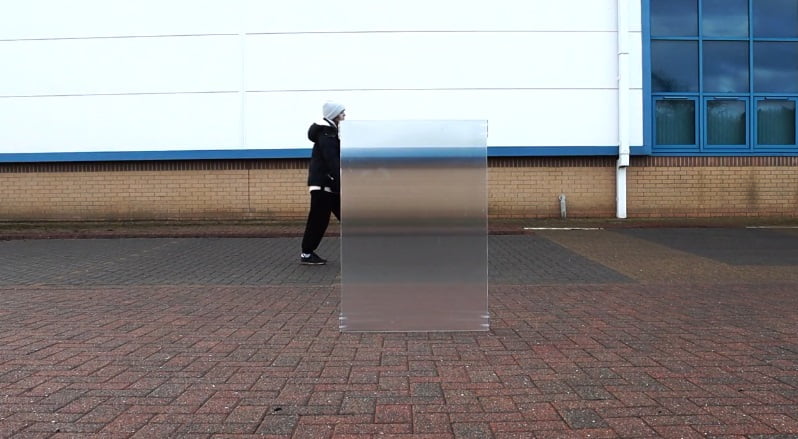 Answering a question from journalists, the engineer noted that in practice their development can be used as a subject of entertainment and for experiments. He said that people from various fields have already contacted the company: magicians, paintball players and artists, and they are glad that the shield will find a use for them.

Tristan Thompson dismissed the possibility that his invention could be used for criminal purposes, since the company has not yet developed a mirror shield so that it is possible to go to the bank unnoticed, and stated that he was not going to give them to the military if they were interested in this product. .

In conclusion, Tristan Thompson shared that the members of his startup are excited that they can offer people a technology that was considered on the verge of science fiction and fantasy, and their development caused a stir.

He noted that Invisibility Shield Company plans to improve its invention and reduce their supply for the time being. People get them by ordering directly from Kickstarter.