(ORDO NEWS) — A recently released image from the moon of Mars provides a glimpse into the complex past of this now dry and dusty world.

From a height above the surface of Mars, the High Resolution Imaging Experiment (HiRISE) orbiter took aim at Danielson Crater, located north of Mars’ equator. This region is of great interest to space geologists due to the layered deposits that line the crater.

Layered deposits are found all over Mars, but Danielson Crater contains some of the most impressive and well-preserved. Even more interesting is that they are evenly distributed, with different levels of erosion: stronger layers form steps, and inside them are layers of weaker material.

The uniformity of these layers means that they could not have arisen as a result of random processes such as impact phenomena. Rather, scientists believe that the layers formed in a regular, iterative process. “The rock was formed millions or billions of years ago when loose sediments settled in the crater one layer at a time and then cemented in place,” NASA explained in a 2019 blog post.

“The cycling of sedimentary properties has made some layers more resistant to erosion than others. Aeons later, these more durable layers protrude outward like steps of a ladder.

Winds have blown the sand along these steps (usually it looks darker and less red, that is, “blue “in color with contrast enhancement), which led to the appearance of patterns similar to zebra stripes.”

On a small scale, there are large areas of rocks that are heavily fractured. Scientists studied these faults and determined that because the pieces fit perfectly together, this happened after the deposits had already turned into rock. 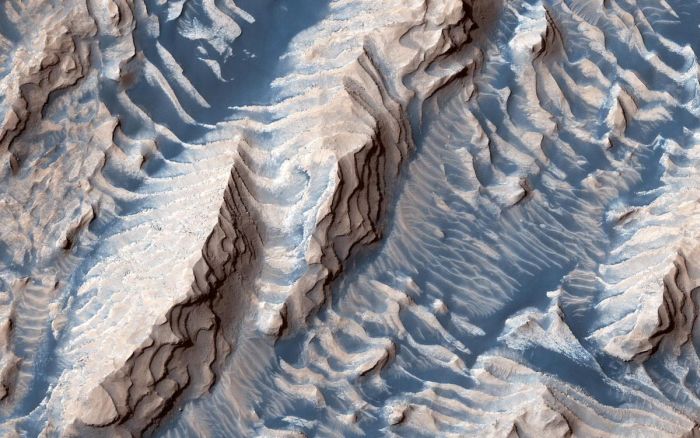 It is not clear exactly how these deposits formed, but they could have formed over a year or even longer.

Some scientists suggest that the periodic process could be the result of climatic changes associated with fluctuations in the orbit of Mars. Another study suggests that rising groundwater may be the cause.

There are so many cool Martian rocks that planetary geologists would love to see in person. Meanwhile, orbiters with amazing cameras like HiRISE are helping to uncover the fascinating history of Mars.