(ORDO NEWS) — The inability to hear the sound of one’s own steps, or their muffledness, apparently impairs proprioception – the sense of the position of one’s body parts in relation to each other and in space – and this can lead to an increased risk of falls and trips.

Scientists came to this conclusion when they discovered that with muffled sounds, a person who walks in place and with his eyes closed moves 14 centimeters further from the starting point than those people who do the same thing, but hear everything as usual.

The authors of the preprint on arXiv.org believe that this may affect future manned interplanetary missions: astronauts will stumble and fall due to the fact that the suit greatly muffles the sounds of the environment, including the sound of footsteps. The researchers suggest taking this into account when designing space suits, for example,

Astronauts’ space suits noticeably reduce the dexterity of movements, and also change or limit the functioning of the sense organs. It is more difficult for an astronaut in a spacesuit to grab objects, his range of actions is narrowed, his proprioceptor functions are reduced – these are sensations of the position of his body parts relative to each other and in space, they help a person to make precise and coordinated movements.

In addition, a person in a spacesuit sees and hears what is happening around him differently, and in something more limited.

All this can affect the safety of the mission and increase, for example, the risk of an astronaut falling. In particular, during the landings on the moon during the Apollo space program, astronauts fell 27 times and stumbled 21 times, including the design of the spacesuit was the reason for this.

Since the last mission to the moon, 50 years have passed, and during this time, scientists were able to identify shortcomings and significantly improve the design of spacesuits. For example, it was found that it does not follow the mechanics of movement of the ankle joint and does not provide the necessary contact between the foot and the boot.

Such problems can make spacewalks a difficult task for astronauts due to contact and fatigue injuries. This and not only scientists and designers took into account when creating new suits, for example, those that NASA plans to use during flights to the Moon and Mars.

Nevertheless, as before, a person in a spacesuit hears sounds very muffled, his field of vision is limited – the astronaut can barely see his own legs, his proprioception and dexterity are reduced. 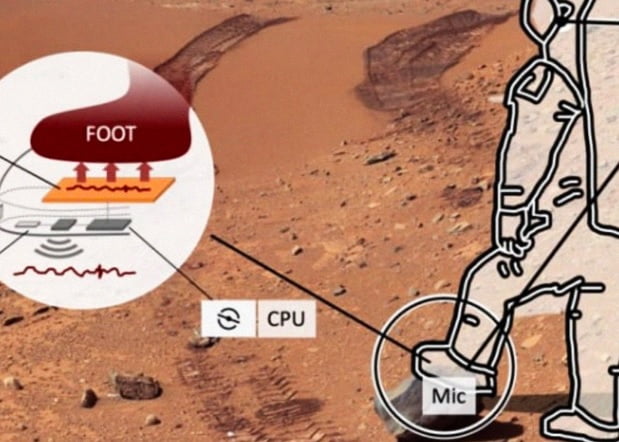 Information from the senses, such as sounds, which tell us a lot about external objects, their movement and our own body, is very important for our interaction with the environment. The sound of our steps helps to understand how far the object is and what size it is, where it is moving, towards us or away from us, and also what kind of soil is under our feet (sandy, hard, viscous, heterogeneous, rocky, etc.).

Accordingly, the change in the nature of these sounds is reflected in all our reactions. And research proves this: modern technologies can change and transmit to the user the sounds associated with the body in real time and thus affect the perception of one’s own body and other perceptual processes, as well as the thoughts and emotions of a person. However, it is still unknown

During the experiment, the participants performed the Fukuda-Unterberger stepping test: they took 50 steps in place with their eyes closed and their arms extended forward, in one case they were wearing headphones that emit white noise, in the other they were not.

It turned out that when using sound insulation, the displacement distance from the initial point was 14.5 centimeters greater than the displacement distance under control conditions. In other words, people who did not hear the sounds of the world around them well, including their own steps, when performing a step test, went further than those who heard everything as usual.

These results indicate that muffled environmental sounds are likely to lead to impaired proprioception and an increased risk of falls and stumbling. Based on this, the authors suggest that increasing the sound transmission of the suit will reduce these disturbances and risks.

But scientists note that making the suit more permeable to sounds, for example, on Mars, is not an easy task. To transmit sounds on Mars, the signal must be amplified many times, because the sounds that we hear on Earth with an intensity of, say, equal to one, on Mars will be heard with an intensity 85 times lower.

However, if the microphone is placed near the ground, i.e. on boots rather than on a helmet, then less amplification will be required. In other words, based on the results obtained, the authors assumed that the astronauts during the mission to Mars would fall and stumble less,

And some time ago, also in order to reduce the risk of falling and stumbling astronauts, scientists equipped their boots with distance sensors. And when obstacles appeared in front of the toe of the boot, the sole began to vibrate, and thus the astronaut knew about the obstacle before his foot stumbled upon it. 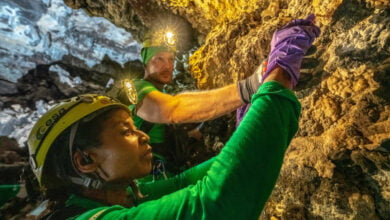