(ORDO NEWS) — On December 11, Blue Origin launched its third crewed suborbital mission, New Shepard, in which six people made a short flight to the edge of space.

The device was launched as part of the NS-19 mission at 17.01 Moscow time from the company’s launch pad in West Texas. The device reached a maximum altitude of about 107 kilometers and landed just over 10 minutes after takeoff.

“We had a great flight today. This was our sixth flight in a great year for the New Shepard program. We sent 14 astronauts into space, flew NASA payloads to validate lunar landing sensors and completed our certification test flights, ”said Bob Smith, chief executive of New Shepard, in a statement. The company said it has scheduled “multiple” New Shepard flights in 2022 with cargo and people.

This was the first flight of the New Shepard company, in which there were six people at once – the maximum capacity of the device. The first two crewed flights, NS-16 in July and NS-18 in October, were with four passengers. Six people will be eligible for the FAA Astronaut Wings.

On yesterday’s mission, two out of six were guests of Blue Origin. Laura Shepard Churchley is the eldest daughter of Alan Shepard, the first American to travel to space, after whom New Shepard is named. Michael Strahan is a former professional soccer player and currently a TV host. He announced his flight preparations for the ABC Good Morning America program.

The other four were clients who paid undisclosed amounts for the space flight. Lane Bess is the director and founder of Bess Ventures and Advisory, a family-owned fund that invests in technology companies. He is the father of Cameron Bess, who also flew. These two are the first father-son pair to go into space together.

Evan Dick is an investor and engineer who previously worked for DE Shaw, the company where Jeff Bezos worked before leaving to found Amazon.com. The fourth astronaut, Dylan Taylor, is chairman and CEO of Voyager Space, which has acquired several space companies. He founded Space for Humanity, a non-profit organization that raises money to sponsor space travel for those who cannot afford to travel on their own.

“Commercial astronauts are projected to spend several hundred million dollars over the next five years, and if they all helped fuel the initiative on Earth, their influence could create significant, affordable and diverse opportunities for space exploration and human advancement here on Earth.” Taylor said in a blog post.

“Space exploration is not a tax-free vacation for the rich. Just like normal Americans pay taxes on airline tickets, billionaires who fly into space should do the same, ”he said in a July 20 press release announcing his proposed bill.

At the time, a Blumenauer spokesman said he planned to introduce the bill in “the coming weeks” after consulting with experts on how it should be structured. As of December 11, he had not submitted the bill, and his office did not respond to a request for comment regarding the status of the December 10 bill. 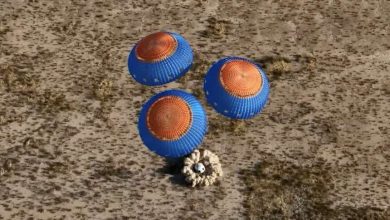