(ORDO NEWS) — Plague epidemics that mowed down mankind almost all over the globe in the Middle Ages were accompanied by the appearance of UFOs in the form of a cigar, dispersing a “terrible fog” and the dead carcasses of animals spreading the plague falling from the sky.

But the matter was not limited to this, and in addition to this, in the descriptions of contemporaries of that period there are facts of the appearance of the “Black Reapers of Death”.

In the annals of Vienna (Austria) there is a description of the event that took place in 1568 – “a fire wagon hovered over the church of St. Stephanie, this was followed by a strong epidemic in Austria, Swabia, Augsberg, Württemberg, Nuremberg and other places, claiming the lives of people and livestock”, and then came the Black Reapers of Death.

Death with a scythe, the image is now known, but originally it arose after the appearance of “terrible people”, “demons” with “terrifying faces”, dressed in black and carrying “long scythes”, “brooms” and “swords”, which were directly connected with plague outbreaks.

In addition to “demons in black,” the appearance of frightening humanoid figures dressed in black has also been reported. These figures were often seen on the outskirts of a city or village, and their presence almost immediately signaled an imminent outbreak of an epidemic. 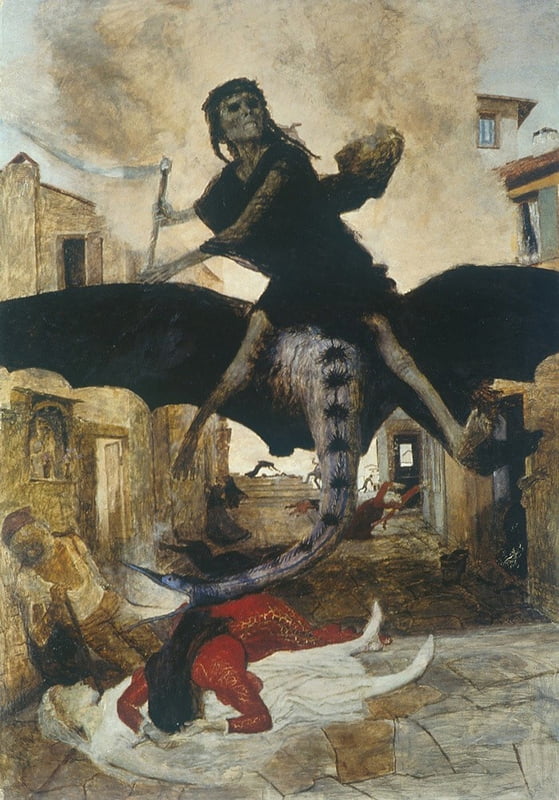 A 1682 manuscript tells of one such visit a century earlier:

“In Brandenburg (in Germany) in 1559, terrible people appeared, who were seen at first by fifteen, and then by twelve.

They appeared in an oat field and at first people thought that they were mowing oats, so the rustle of their scythes could be heard at a great distance, while the oats remained standing. When a lot of people ran out to look at them, they continued to mow.

A visit to the oat fields by strange people was immediately followed by a severe outbreak of plague in Brandenburg.

This incident raises simple questions: Who were the mysterious figures? What were those long, scythe-like instruments that made a loud whistling sound? It appears that the “scythes” may have been long instruments designed to spray poison or microbially contaminated gas.

This means that the townspeople mistook the “kos” movement as an attempt to mow oats, when in fact these movements were an act of spraying the city with aerosols.

Similar men dressed in black have been recorded in Hungary:

“… in the mountainous cities of Hungary on Ascension Day in the evening, to the great dismay of everyone, so many black horsemen appeared on Schulersberg that it was believed that the Turks were making a secret raid, but they quickly disappeared again, and after that a ferocious plague broke out in the vicinity. In the year of Christ 1571, this was seen in Kremnica.

Strange people dressed in black, “demons” and other terrifying figures were also observed in other European communities.

Frightening creatures were often seen with long “brooms”, “scythes” or “swords”, which were used to “sweep” or “knock” on the doors of people’s houses. The inhabitants of these houses subsequently fell ill with the plague.

It was from these messages that people created the popular image of “Death” as a skeleton or demon carrying a scythe. The scythe has become a symbol of the action of Death, scything people like stalks of grain.

Hormone therapy improved cognition in people with Down syndrome

Hormone therapy improved cognition in people with Down syndrome