(ORDO NEWS) — An international team of astronomers has discovered the closest black hole to Earth orbiting a sun-like star, and this is the first time such an unusual binary system has been discovered in our galaxy.

The black hole, designated Gaia BH1, lies 1,600 light-years from Earth and has a mass about 10 times that of the Sun.

Such black holes, which have a relatively small mass, are called stellar-mass black holes.

The mass of such objects is no more than 100 times the mass of our star, and they are formed as a result of catastrophic explosions of some supernovae.

There should be about 100 million such objects in the Milky Way , but only a few have been discovered.

Virtually all stellar-mass black holes actively feed by stealing material from a companion star and emitting large amounts of X-rays.

Gaia BH1 is different from its “brothers”; this black hole does not steal anything from its stellar companion, so it is considered dormant or dormant.

The object was originally detected by the European Space Agency’s Gaia Optical Range Space Telescope, which detected oddities in the companion star’s rotation.

Follow-up observations with the ground-based Gemini Observatory provided additional data on the star’s motion parameters and confirmed that it is most likely orbiting a black hole.

“Take the solar system , put a black hole where the Sun is, and the Sun where the Earth is, and you get this system,” Karim El-Badri, an astrophysicist at the Harvard-Smithsonian Center for Astrophysics , commented on the study .

A statement from the Institute for Astronomy of the Max Planck Society states the following:

“There were many claims about the discovery of such systems, almost all of these discoveries were subsequently refuted.

This is the first unequivocal detection of a sun-like star in a wide orbit around a stellar-mass black hole in our galaxy.” 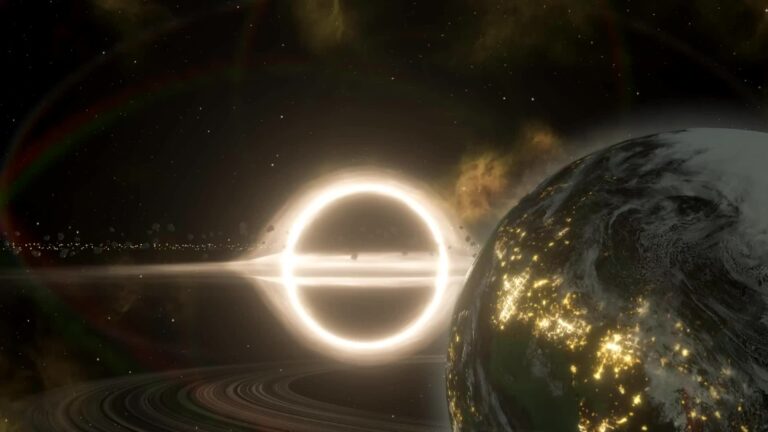 The team behind the discovery believes the event marks a milestone in the hunt for dormant black holes. And while the data seems compelling, it’s unclear exactly how this odd cosmic pair came into being.

The beginning of the binary system was supposed to give a star, the mass of which is about 20 times the mass of our Sun, around which the sun-like companion revolved.

Over millions of years of evolution, this massive star would have “swollen” to such a size that it had to absorb its companion, which would lead to a catastrophic supernova explosion.

How a sun-like star survived all this remains a mystery, suggesting that we lack a full understanding of how such binaries form and evolve.

“This raises a lot of questions about how this binary system formed, as well as how many similar sleeping black holes exist.”