(ORDO NEWS) — Ichthyologists have described a new species of fish from the family of sea slugs, which lives in the Atakama Trench at a depth of 5913-7616 meters. It was named Paraliparis selti.

Unlike other deep-sea inhabitants, which are usually painted black or red, this fish has a bright blue color. As noted in an article for the journal Marine Biodiversity, P. selti is the closest relative of the Antarctic sea slugs, which do not descend below three kilometers.

This indicates that he mastered the ultraabyssal independently of other deep-sea members of the family.

Fish from the Liparidae family, common in all oceans from the Arctic to Antarctica, do not look too attractive: they have long gelatinous bodies, large heads, small eyes and no scales.

For their peculiar appearance, they are called sea slugs. However, for ichthyologists, linden fish are of great interest.

The fact is that many of them have perfectly adapted to life at great depths – in conditions of low temperatures, high pressure and increased seismic activity.

Liparidae are the dominant group of fish in the ultra-abyssal, at depths of 6,000 to 8,000 meters. And scientists even found one of these fish in the Mariana Trench at a record depth of 8178 meters.

According to ichthyologists, the lipar family includes more than 400 species. However, this is clearly not the final figure. Specialists regularly describe new species of these fish, primarily deep-sea ones.

For example, in 2018, during an expedition to the Atacama Trench off the western coast of South America, researchers using cameras with bait captured three supposedly new species of lipar, which were unusually bright for deep-sea fish. They received the code names pink, blue (cyan) and purple sea slug.

The expedition members managed to catch and raise to the surface one of the blue sea slugs – a young specimen 7.6 centimeters long.

Four years later, a team of ichthyologists led by Thomas D. Linley from Newcastle University studied the body structure and genome of the caught fish and came to the conclusion that it belongs to the genus Paraliparis, namely, to a group that includes mainly Antarctic species.

These differences were enough to distinguish it into a new species, which received the Latin name Paraliparis selti. The authors borrowed the specific name from the extinct language of Kunsa, which was spoken by the natives of the Atacama Desert until the middle of the 20th century. 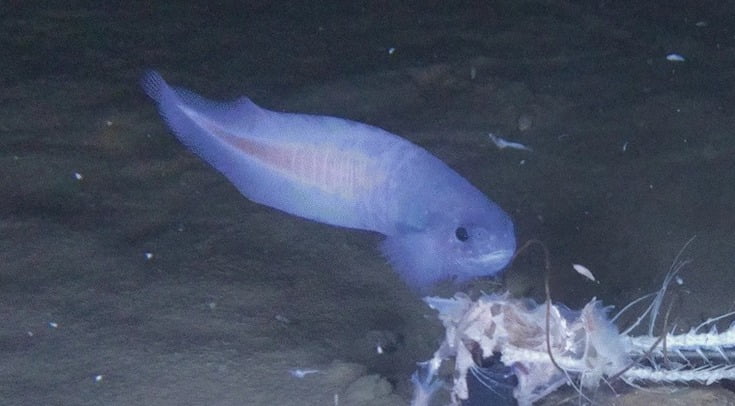 Why the blue sea slug has such an intense coloration is not yet clear. Other deep sea dwellers are usually colored black or red, making them nearly invisible to predators and prey.

Perhaps the blue coloration of P. selti is just an evolutionary legacy from ancestors in shallow waters – or helps it survive in some as yet unknown way.

The authors emphasize that the blue sea slug has large eyes for lipar fish, so it is possible that bright colors are used for communication between congeners.

Little is known about the distribution and ecological preferences of the blue sea slug. Researchers observed these fish only in the Atakama Trench, at a depth of 5913-7616 meters, and they are especially numerous at a depth of about 6700 meters.

Side by side with P. selti are pink and purple sea slugs that have not yet received a scientific description. Blue sea slugs feed on invertebrates.

Although these fish were attracted by the mackerel bait fixed near the underwater chamber, they did not touch it, preferring to hunt the amphipods gathered near it. In the mouth and stomach of the captured specimen, the researchers also found amphipods.

Linley and his co-authors note that the discovery of P. selti will help to better understand how sea slugs developed the ultraabyssal.

According to a popular hypothesis, all deep sea slugs form a single evolutionary branch, basal to the rest of the lipar fish. However, P. selti’s close relationship to Antarctic species that do not descend below three kilometers suggests that it has independently colonized deep sea habitats.

This is supported by the discovery of three potentially new, but so far undescribed species of deep sea slugs off the coast of Antarctica.

It is possible that Antarctic linden fish, well adapted to low temperatures, first mastered the deep waters around Antarctica, and then settled in the Atakama Trench, where environmental conditions are similar. In this way.