(ORDO NEWS) — Baalbek means “Lord of the Beqaa Valley” and its ruins are located 65 km northeast of Beirut.

It is known that Baal in Phoenicia, Canaan and Syria is not only a “lord” or “ruler”, but also a specific deity (not to be confused with God the Creator – El), which in Sumer (and then in Akkad, Assyria, Babylon) was called Marduk (son of Enki, one of the two supreme gods of Sumer).

Marduk considered himself the leader of the Age of Aries, which began (according to some modern esotericists) around 2310 BC. and ended around 150/160 BC.

“The patriarch of the Lebanese Maronite community, Estfan Doveigi, wrote: “According to legends, the fortress of Baalbek is the most ancient building in the world.

It was built by the son of Adam Cain in 133 from the creation of the world, in a fit of insane rage. He named it after his son Enoch and populated it with giants who were punished by the Flood for their iniquity.”

The Maronites are the eastern branch of Catholicism (the self-governing Maronite Church). 133 years from the creation of the world (5509 BC according to the chronology of the Septuagint), this is 5377 BC. – the beginning of the rise of Sumer, in which, according to the Sumerian texts, the Anunnaki ruled – and the Sumerians considered them gods. 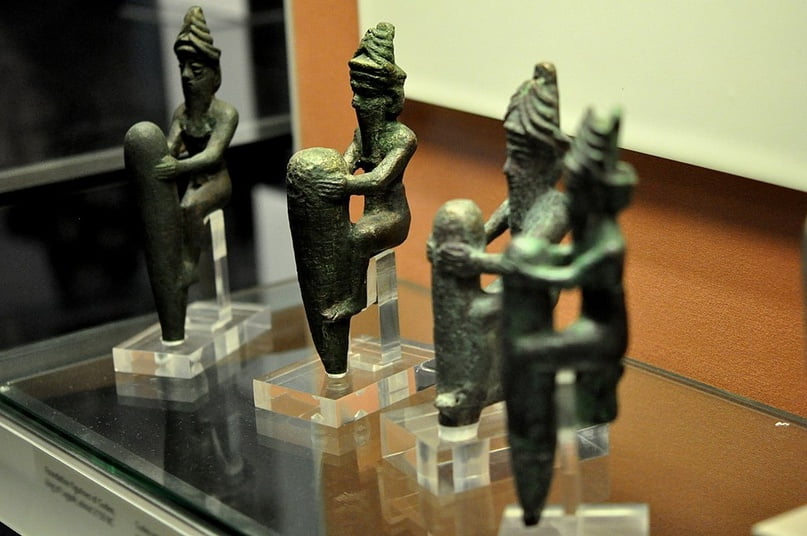 Cain and the Anunnaki

These are the “giants” with whom Cain populated the proto-Baalbek he built. According to Zecharia Sitchin (and many after him), the Anunnaki are several hundred (up to a thousand) aliens, voluntary migrants from an alien highly developed civilization, who, using genetic engineering, created assistants for themselves about 200,000 years ago (the Anunnaki were originally called “primitive workers” ).

One way or another, perhaps it was the Anunnaki in ancient times who built these huge megalithic structures for some of their purposes, from which now we can only see ruins.

Thus, most likely, Baalbek was founded by Cain even before the murder of Abel. The fact that Cain, even before killing Abel, made friends with the Anunnaki, or Nephilim (the children of the Anunnaki from earthly women, they are called giants in the Book of Genesis), perhaps explains why Cain became a murderer: after all, the Anunnaki, judging by the Sumerian texts, were not only sexually preoccupied adventurers, but also psychopaths (and the two clans of the Anunnaki, the clans of the brothers Enlil and Enki, fought among themselves).

It should also be noted that the words “Baal” and “Babylon” have common historical elements, since Babylon (disturbance) is the city of Marduk, the chief troublemaker and rebel among the leaders of the Anunnaki.

It was because of the ambitions and psychopathy of Marduk (Enki’s son) that the Enki and Enlil clans fought each other three times, and their third war (circa 2016 BC) ended in a major regional disaster, known to historians and archaeologists as the “great drought” in Mesopotamia (as well as in the Near, Middle and Far East) at the turn of the III and II millennia.

Zecharia Sitchin writes in his books that these were the consequences of the use of nuclear weapons in this last war of the Anunnaki clans. After this catastrophe, almost all the Anunnaki left the Earth. According to Sitchin, only Nanna (son of Enlil) in Harrar and Marduk in Babylon remained there for over a thousand years.

It seems that the Anunnaki were seen alive not only by Abraham (in the XXII-XXI centuries BC), but also by Moses in the 15th century BC. (at least he could have known about the ruler of Haran, about Nanna, from his father-in-law Jethro, prince and priest of the Median tribe of Kenites, who lived next to the lands of Haran). 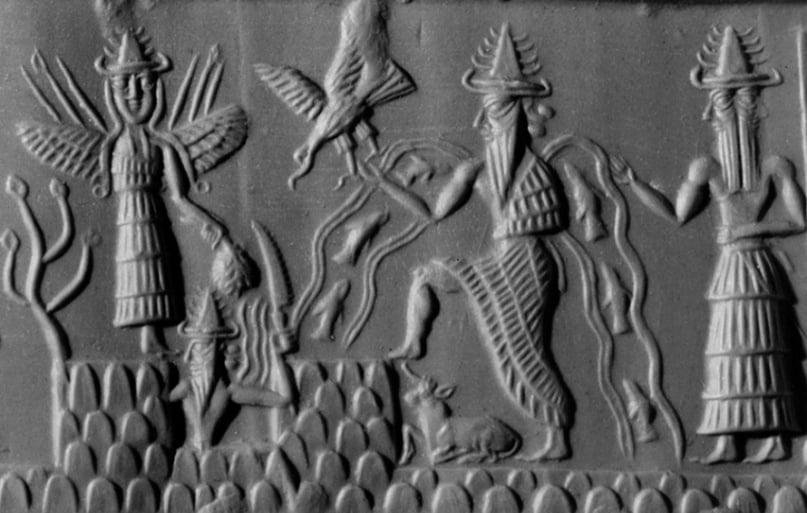 One way or another, the ancient Phoenician deity Baal is most likely the Sumerian “god” Marduk, and, most likely, it was his band of robbers-“giants” who led Cain to the city of Baalbek he founded.

According to the Book of Genesis, after the murder of Abel, Cain was expelled far to the east of Eden (from Mesopotamia), and the descendants of Cain, the Cainites, mixed there with the descendants of the proto-Sumerians, who first migrated (70-50 thousand years ago) from South Africa to the north and to Arabian Peninsula, and then to Asia, including the Far East. 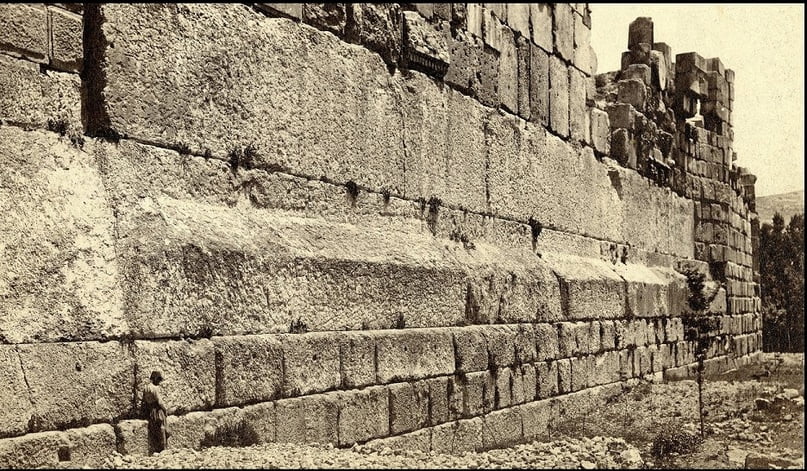 “In the center of the city stood a grandiose temple dedicated to Astarte and Baal, which today is a platform of five million square feet, built from the largest stones ever created by human hands. Further, J. Robinson, author of High-Tech Stonework of the Ancients:

The Unsolved Mysteries of Master Engineers, writes that the stones originally (in the 6th millennium BC) used in this place to build the temple of Baal and Astarte, are so so huge that compared to them, the 200 one-ton blocks that can be seen in the temples and pyramids of Giza look like toy bricks. 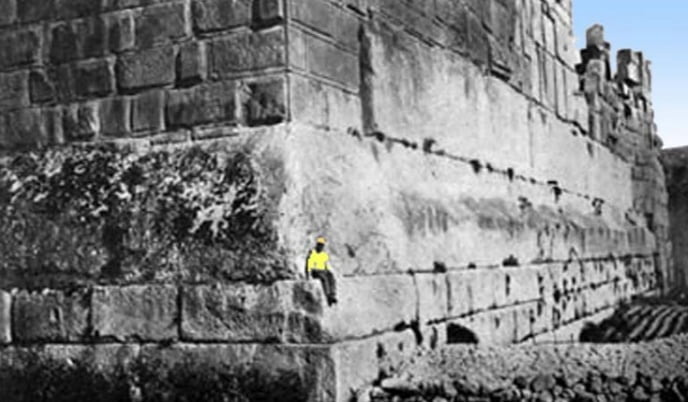 The largest stones of Giza weigh about 400 tons, and the three hewn stones known as the “trilithon” that lie at the base of the ruins of the temple of Jupiter (the former temple of Baal) weigh about 800 tons each.

“Officially, scientists attribute the movement and sawing of these monstrous monoliths to the Romans around 27 BC, but many researchers dispute this idea, suggesting that these are the remains of some other ancient civilization dating back to a much earlier era.” 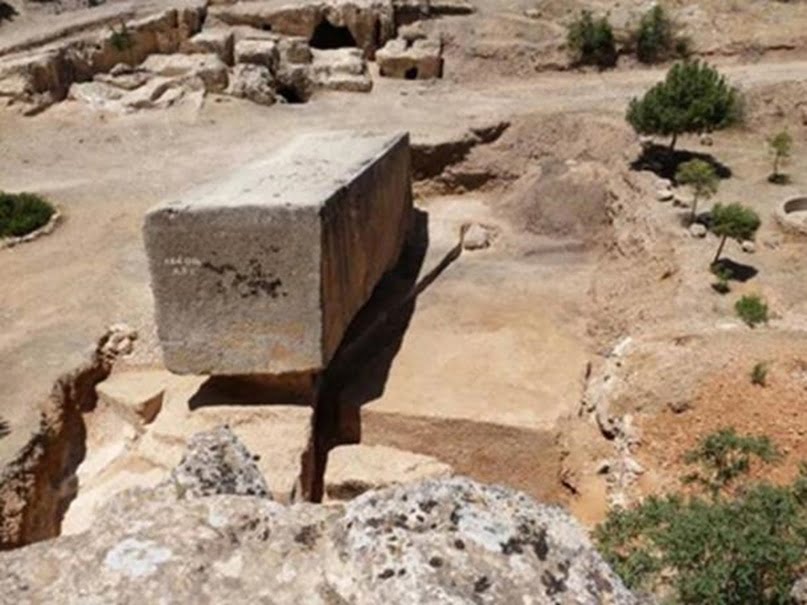 “Moving and setting up three 800-ton megaliths 18 or 20 feet above the ground, as in the case of Baalbek, is a problem of a completely different order. I think this requires careful consideration, and not a simple statement “the Romans did it,” as is customary in archeology today.”

The total weight of the entire base at Baalbek is estimated at about five billion tons. Were the Romans able to move that amount of stone? It is hard to imagine. 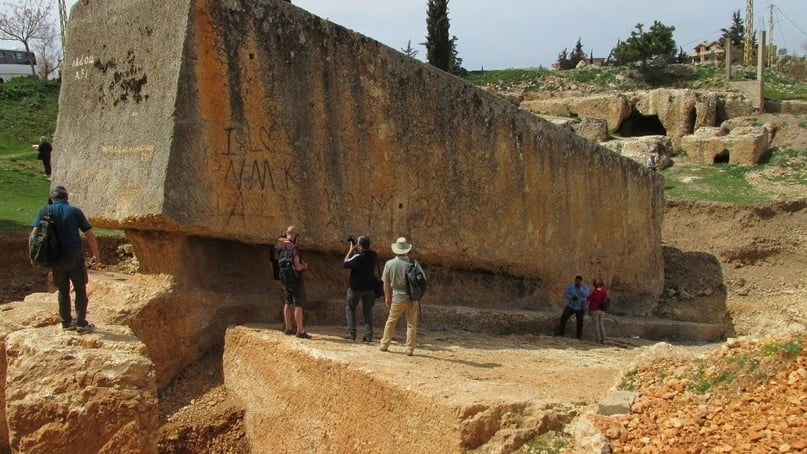 The mass of the largest megalithic block found in Baalbek in 2014 is estimated at more than 1,650 tons). In fact, there are three such monoliths known.

The first, weighing about 1000 tons, has been known since ancient times and is called the “Stone of the South”. In size, the stone reaches 20 meters in length, more than 4 meters in width and about 4 meters in height. 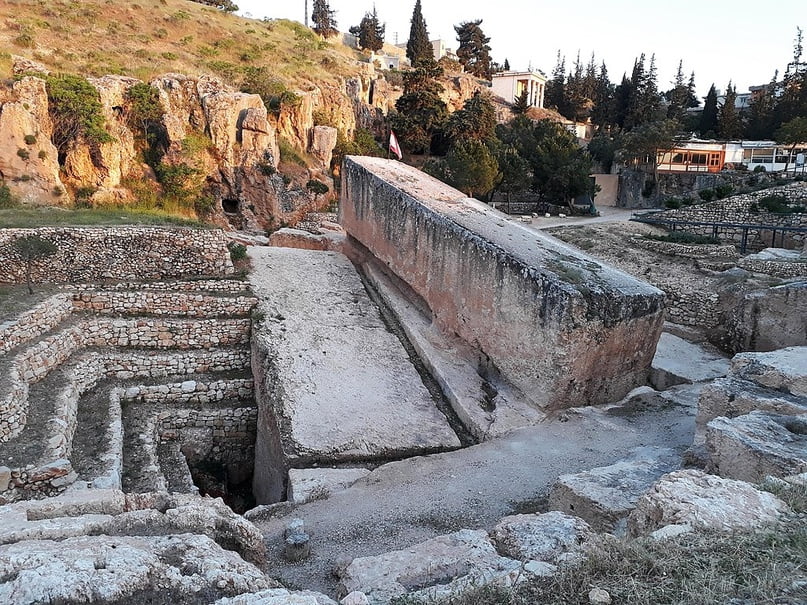 In the 1990s, a second megalithic block, similar to the “South Stone”, was discovered in the Baalbek quarry, its mass is about 1300 tons, its length is about 20 meters, its cross section is 4.5 × 4.5 m. But on this find in Baalbek did not end. In the Wikipedia article “South Stone” we read: 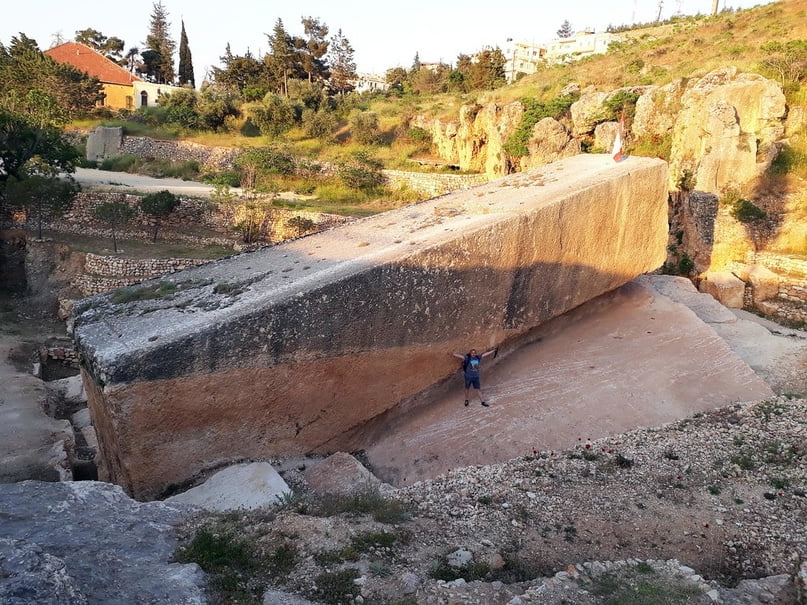 “In 2014, while exploring the same Baalbek quarry, the German Archaeological Institute discovered a third monolith about 19.6 meters long, the mass of which is estimated at 1650-1670 tons. That is, it is currently the largest stone of all known, ever carved human hands.”

J. Robinson in the article “High Tech Freemasonry of the Ancients: The Unsolved Mysteries of the Master Engineers” writes:

“After the discovery of the second monolith, Graham Hancock wrote:

“I believe that these huge megaliths were prepared long before the construction of the temple of Jupiter by the Romans and are probably 12,000 or more years old – like the megalithic site of Göbekli Tepe in Turkey.

I assume that we have the handiwork of the surviving representatives of a lost civilization, that the Romans built their Temple of Jupiter on a 12,000-year-old megalithic foundation that already existed, and that they were unaware of the giant carved megaliths in the ancient quarry, as they were buried in Roman times (as was the recently discovered block that remained there until recently). 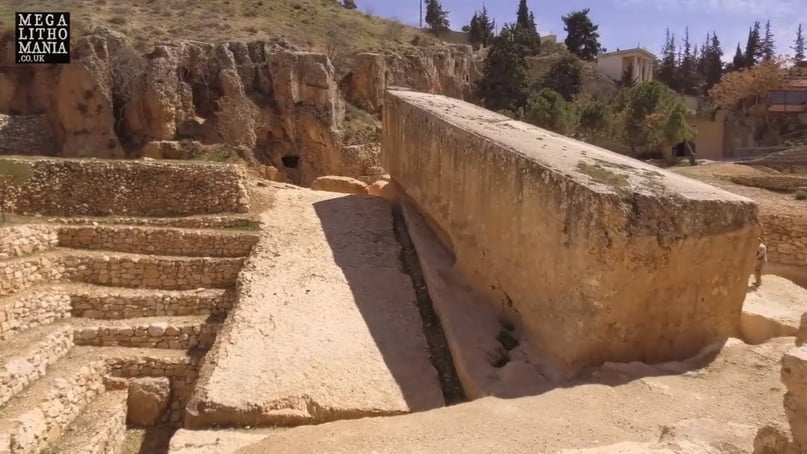 It remains inexplicable how the Romans – or whoever was responsible for such an astounding feat of engineering – quarried, carved and transported the Baalbek megaliths.

And another mystery is why they left the biggest blocks in place. The main answer is that they were too heavy to maneuver, so they were left in the ground, but they were able to move the 800-ton “trilithon” blocks, so why not the rest?

Even if they thought it was beyond their engineering ability, they would certainly cut it into smaller, more manageable blocks to complete the temple.

“It is very strange that they did not, and the fact that these gigantic, almost finished blocks were left in the quarry and were never cut into smaller blocks and used in the general construction of the temple of Jupiter, makes me think that the Romans did not even knew they were built,” Hancock explains. 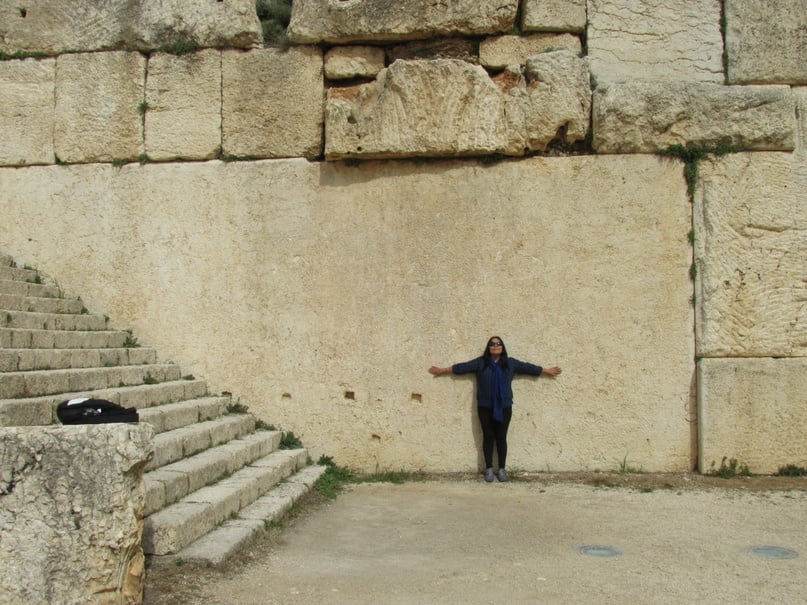 Could all these pyramids and ancient objects of incomprehensible purpose be intended for the bodily embodiment of the fallen guardian angels, after which they called themselves gods and established cults of worship to themselves?

Apparently, the process of incarnation was quite energy-intensive and possible only in certain places, and these places were artificially reinforced with ingenious megalithic masonry. But even this did not always help, and the spiritual body was not always successfully “loaded” into the earthly one in the realities of that time.

As for the lack of mention of this in the Book of Giants or the Book of Enoch, as well as in the Bible, this still does not say anything. This speaks more about the relationship between man and God than about the techno-magical occult practices of antiquity. 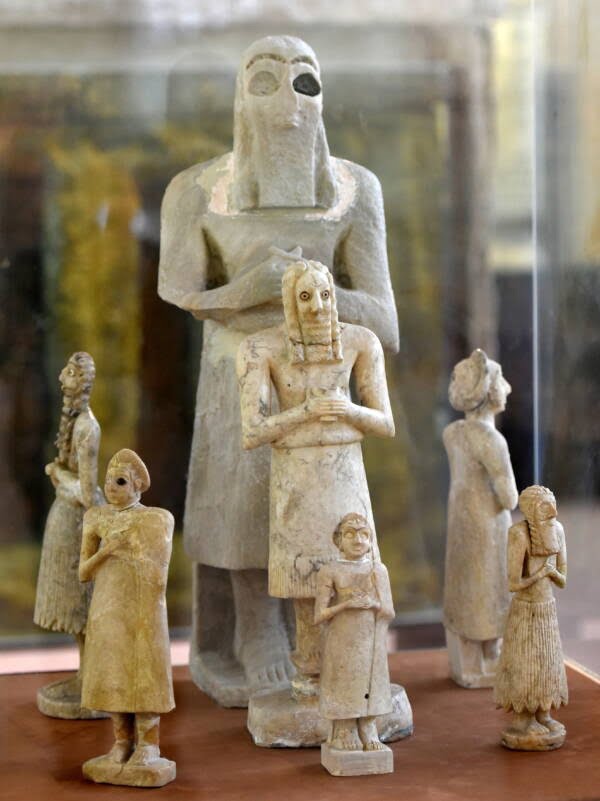 The Bible does not say anything about the existence of the pyramids, but this does not mean that they did not exist then. The lack of mention could be due to two possible reasons:

As for the Book of the Giants, only the Manichaean version is available to us. 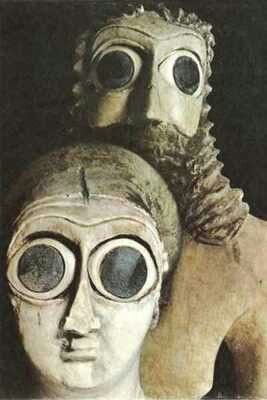 “Official science” still believes that the pyramids of Giza were built under the pharaohs of the 4th dynasty (2639-2506 BC) – Khufu (Cheops), Khafre (Khephren) and Menkaure (Mykerin).

In recent years, settlements of the builders of the pyramid of Cheops (the largest), as well as several papyri with reporting documentation of tenants and centurions about this construction, have been discovered. 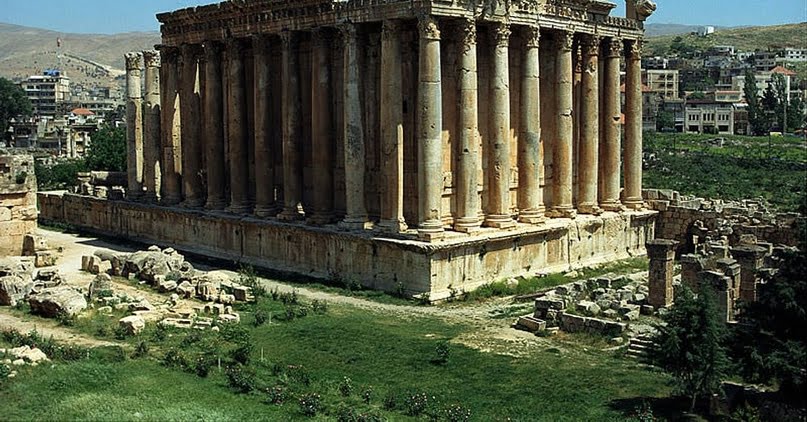 However, supporters of alternative versions argue that under Cheops only repair work was carried out (albeit large-scale), and, in addition, during Cheops, some corridors inside the pyramid were cut down – Cheops was looking inside the pyramid for the secret tablets of the god of wisdom Thoth, which he (Thoth) hid in the secret premises of this pyramid – which, according to the plan of Thoth, was erected many thousands of years earlier than the life of Cheops.

And there is a papyrus from the time of Cheops, which directly states that Cheops was looking for the secrets of Thoth in the pyramid. And it is written in the so-called. “inventory stele” found (dug out) relatively recently between the paws of the Sphinx. 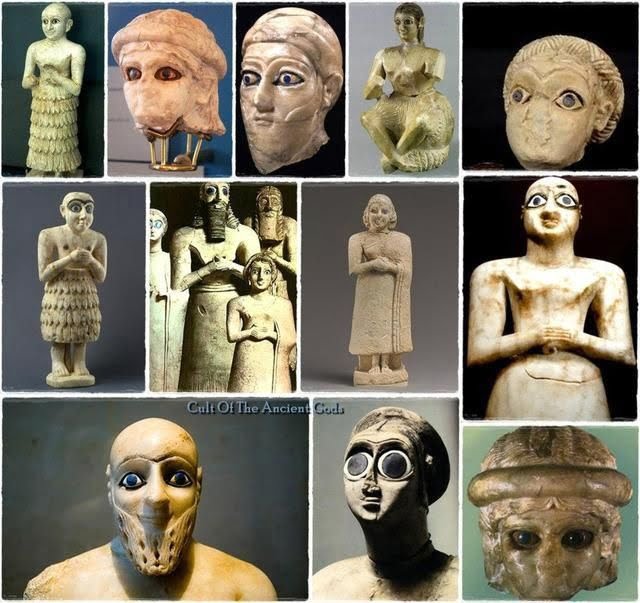 As for the Great Sphinx, official science also believes that it was built many millennia earlier than Cheops lived.

Graham Greene and Robert Bouvel hypothesized in the 1990s (and proved it with computer simulations) that the topology of the pyramids of Giza exactly matches the position of the three stars of Orion’s Belt 10,500 BC, and that the sphinx originally had the face of a lion – and it looks exactly where at the beginning of the era of Leo (just about 10,500 BC) the star Sirius, sacred to the Egyptians, rose.

Zecharia Sitchin believes that the pyramids and Sphinx-Lion were built according to the plan of the chief inventor and Anunnaki geneticist named Ningishzida (son of Enki), around the same time – 10,500 BC. Sitchin claims that it was Ningishzida who later became known in ancient Egypt as Thoth, the god of wisdom.

Finally, by 2017, modern scientists came to the conclusion that about 10,800 years ago a planetary catastrophe occurred on Earth (a huge asteroid fell into the Atlantic), and only a few centuries later life on Earth began to recover.