(ORDO NEWS) — The standard model of dark matter behavior shows that all galaxies should have dark matter, but small ones have more of it than large ones. In fact, some small galaxies are deprived of it. The authors of the new work are trying to figure out why.

There is more than five times more dark matter in the Universe than ordinary visible matter. From the point of view of modern cosmology, it was dark matter that led to the formation of galaxies: its gravity “collected” dust and gas around itself, from which stars and dust clouds formed, of which galaxies are especially large clusters.

Moreover, if the galaxy is low-mass, it should also attract less visible matter, and as a result, it will have fewer stars. NGC 1052-DF2 is one of the few galaxies with almost no dark matter. If the new work is correct, it has many as yet undiscovered counterparts / ©Wikimedia Commons

Until now, almost all observed small galaxies corresponded to this rule. Fortunately, it is not so difficult to detect dark matter there and estimate its mass: it is enough to compare the speed of rotation of stars around the center of the galaxy.

If the speed of rotation around the center of the luminaries on the galactic periphery is higher than it should be based on the observed visible matter, then the influence of dark matter is evident.

However, not so long ago, astronomers discovered two low-mass galaxies, where there was practically no dark matter – DF2 and DF4.

They directly violated the ideas of cosmologists and aroused enthusiasm among supporters of alternative theories, who are trying to show that there is no dark matter and that the gravitational force on large scales for some reason varies non-linearly.

The problem was exacerbated when an attempt to obtain DF2 and DF4 galaxies by simulations failed.

The authors of the new work, published in Nature Astronomy , tried to explain the situation using the standard model of dark matter. To do this, they used simulations in which ordinary low-mass galaxies pass extremely close to larger ones.

In general, the suggestion that a close passage of this kind can deprive a small galaxy of its dark matter is not new. More than six months ago, Naked Science already described this problem. 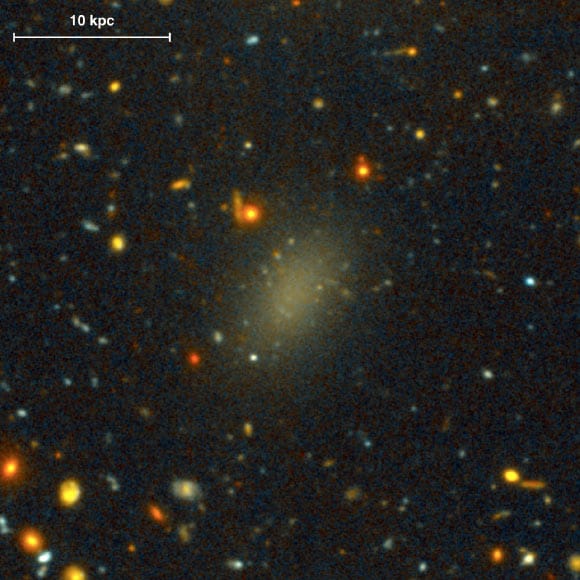 Galaxy f Dragonfly-44, in contrast to DF-2 and DF-4, is oversaturated with dark matter / © Wikimedia Commons

Then we asked the physicist Nikolai Gorky to comment on this difficult situation. The scientist noted that a number of galaxies are known that have an “excess” of dark matter: for example, Dragonfly-44.

From this, he continued, the conclusion suggests itself that galaxies with serious encounters are able to “rip off” neighboring galaxies, depriving them of part of the dark matter. Then one object will be with its excess, like Dragonfly-44, and the others will be with a deficiency, like DF2 and DF4.

The value of the new work is that its authors tried to calculate the probability of such an event. Using simulations of the encounters of certain real galaxies, researchers have shown that sufficiently massive galaxies should “rip off” smaller ones, often depriving them of dark matter.

Large galaxies with a visible mass of more than a hundred billion solar matter should have a small satellite galaxy with almost no dark matter in 30% of cases.

It follows from this that the formation and appearance of the galaxy is determined by the history of its past encounters to a much greater extent than was commonly thought. It turns out that the deficit of dark matter is a fairly common phenomenon, and future astronomical observations should confirm this.

Another important consequence: alternative theories that try to declare dark matter non-existent, in this case, receive a problem rather than confirmation.

If some small galaxies have a lot of dark matter, and some have little, but their sizes are close, then within the framework of an alternative theory it is extremely difficult to explain why the force of gravity in them changes differently with distance from the center.

The question of the nature of dark matter is one of the key questions in modern physics and cosmology. If this hypothesis is confirmed by observations (and observations capable of confirming it are already underway), our entire understanding of the world around us can seriously change.