(ORDO NEWS) — Researchers have mapped 25,000 supermassive black holes on the sky map. The result is the most detailed map of the universe in its class.

The achievement is described in a scientific article accepted for publication in the journal Astronomy & Astrophysics. In the meantime, you can familiarize yourself with its preprint.

At the center (core) of every large galaxy is a black hole with a mass of millions or even billions of suns. The powerful gravity of this monster makes the surrounding material fall on it. In this case, matter is heated and emits radiation in a wide variety of ranges, from radio waves to X-rays.

If the black hole dines on matter especially densely, it turns into a flaming beacon, which is visible in radio and other telescopes, even if the galaxy is very distant. Then astronomers say that this galaxy has an active nucleus.

Such voracious black holes are of great interest to astronomers and are explored by all possible methods. However, one of the most productive ways to study them is observation with radio telescopes.

The radio astronomy archives contain tens of thousands of galaxies with active nuclei. For example, the VLSS catalog contains almost 70 thousand radio sources, most of which are just such galaxies.

It would seem, what is remarkable against this background of the new work, in which slightly more than 25 thousand supermassive black holes are mapped? However, there is a nuance: the new data were obtained on the unique LOFAR radio telescope system. 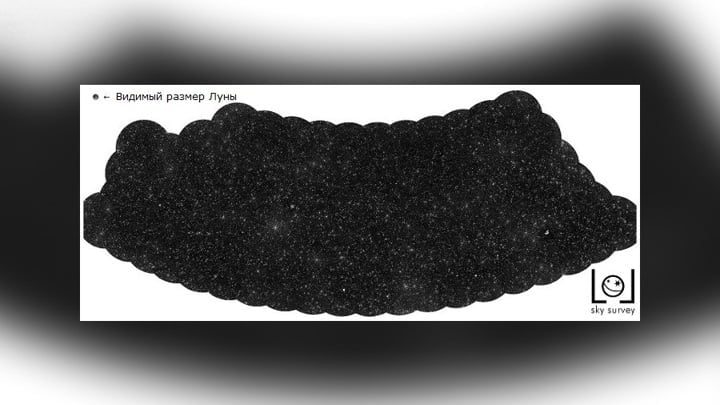 The authors of the new study observed distant galaxies at radio frequencies from 42 to 66 megahertz. Scientists have very little information about what the sky looks like in this range, although it is very important for studying supermassive black holes. It’s all about the ionosphere – the layer of the Earth‘s atmosphere filled with charged particles. The ionosphere distorts low frequency signals coming from space. Researchers compare such observations to trying to see the world from the bottom of a pool. In addition, the ionosphere is a turbulent medium, and the distortions it introduces are constantly changing.

Scientists had to work hard to get around the harmful influence of this layer of the atmosphere. They used 52 LOFAR stations located in nine European countries. The authors combined 256 hours of observations and processed them on supercomputers, making new corrections for the influence of the ionosphere every four seconds of the observation time. Incidentally, it took several years to develop and test the required software.

But now science has the most detailed map of the sky at low radio frequencies in the entire history of observations. True, so far it covers only 4% of the northern hemisphere of the celestial sphere. However, scientists do not intend to stop there and, over time, expect to cover the entire northern sky with their map.

Very large telescope detected signs of the birth of a planet

Military provocations, popular riots and earthquakes: what to expect in August 2020

Very large telescope detected signs of the birth of a planet

Military provocations, popular riots and earthquakes: what to expect in August 2020