(ORDO NEWS) — The binary system LP 413-53AB can rightly be called “extreme”: its constituent stars are extremely cold, very old and incredibly close to each other.

Ultracold dwarfs are stars so cold that they emit practically no visible light and can only be seen in the infrared.

The most famous of these is the dwarf Trappist-1 , which has a whole system of planets. No planets have been found in the binary system LP 413-53AB, but it is unique in its own way.

A pair of stars is in a very tight orbit, making a complete revolution in less than a day.

A report on this was made at the 241st meeting of the American Astronomical Society (AAS), recently held in Seattle. The press service of Northwestern University spoke briefly about the find.

Adam Burgasser and his colleagues noticed an unusual signal in the archival observation data.

Due to the extremely close location of the dwarfs, it was difficult to understand whether it was associated with a single star or with a very close binary. 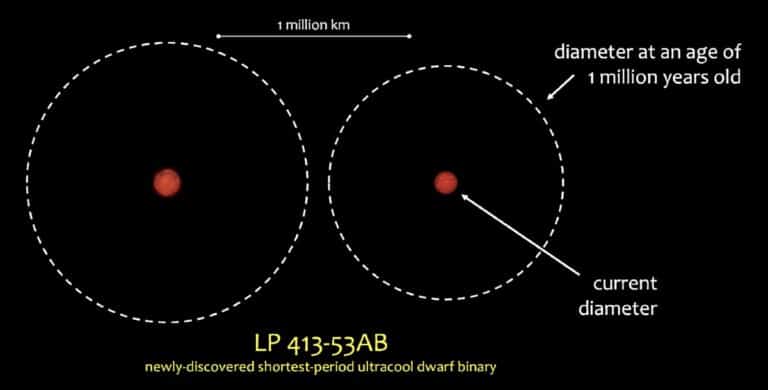 “Most of the binaries we study have periods on the order of years. Therefore, measurements are carried out after a few months, after which these data can be collected together, said Professor Burgasser.

“But with this system, changes in the spectral lines could be seen in real time. It’s amazing to see something happening in space on human timescales.”

Indeed, the work showed that the ultracold dwarfs of the LP 413-53AB system are separated by a distance of about a million kilometers.

This is less than a percent of the distance between the Earth and the Sun, and less than from Jupiter to its satellite Callisto.

The stars take just 20.5 hours to make a complete revolution in this tight orbit, making LP 413-53AB the fastest orbiting known such system.

In addition, they tend to include very young stars. In contrast, the age of the dwarfs in the pair LP 413-53AB is comparable to the Sun and is estimated in billions of years.

Scientists suggest that they migrated so close to each other only over time, gradually, or as a result of a gravitational collision caused by the release of a third component from the system.