US, WASHINGTON (ORDO NEWS) — According to accurate data obtained by the Gaia astrometric mission, the radius of the shining disk of the Galaxy is 129 thousand light years. However, the Milky Way is far from exhausted by all the stars, clusters and gas clouds. Far beyond its visible portion extends a massive halo of dark matter.

It cannot be viewed with any telescope, but the attraction of the halo accelerates the movement of stars in the outer parts of the galactic disk and affects its neighboring objects.

This influence was used by Alis Deason and her colleagues at the University of Durham to estimate the size of the dark halo of the Milky Way. According to them, the diameter of the halo is an order of magnitude larger than the galactic disk and reaches 1.9 million light years.

This was reported by astronomers in an article accepted for publication in the journal Monthly Notices of the Royal Astronomical Society , but for now presented in the arXiv.org open preprint library.

Scientists have simulated a halo of dark matter for a galaxy with the same mass as the Milky Way (according to the same Gaia probe, it is estimated at 1.5 trillion solar masses, considering dark matter), and in a similar environment.

Recall that it is located in the Local Group of galaxies gravitationally connected with each other. Several dwarf companion galaxies are moving in the immediate vicinity of ours, and only 2.5 million light-years away is the large Andromeda galaxy.

Modeling the dynamics of the neighbors of the Milky Way, the authors found that beyond the edge of the halo of dark matter the speeds of motion of nearby dwarf galaxies are falling, indicating the farthest border of the galaxy.

Then the scientists turned to the data of real observations of the behavior of the Milky Way neighbors in the Local Group. Such a drop in speeds was recorded at a distance of about 292 kiloparsecs (950 thousand light-years) from the center of the Galaxy — 35 times farther than the Sun is. It turns out that the full diameter of the Milky Way is 1.9 million light-years.

Star S62 moves so fast that it distorts space-time

Star S62 moves so fast that it distorts space-time 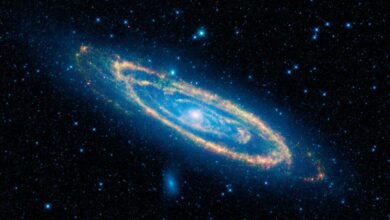