(ORDO NEWS) –Astronomers from the international team have provided the results of their next study, which proves that once upon a time, the Sun had huge rings of dust.

At the same time, experts are sure that it was their presence that caused our planet to not turn into a super-earth.

In astronomy, super-earths include those planets that are at least twice as large as the Earth and 10 times heavier. Such objects are quite common. Super-Earths revolve around a third of the sun-like stars in the Milky Way.

In this regard, the researchers are interested in why there are no such planets in the solar system. The Earth could well be an excellent option for such a planet. André Isidoro led a huge team of specialists from Rice University in Houston. She stated that, most likely, they were able to solve this riddle.

Isidoro, together with his colleagues, created a special computer model, with the help of which it turned out to be very easy to simulate the conditions under which the formation of the solar system took place at its very beginning.

Simulations demonstrated that the young Sun was surrounded by rings that resembled those of Saturn today. Areas of high pressure located around the star could arise when cosmic particles began to move towards it under the influence of strong gravitational attraction.

Then they started to heat up and gave off a lot of vaporized gas. In areas of high pressure, dust began to collect in huge rings.

If there were no such rings, then the Sun would have absorbed the dust too quickly. It was also used later to create planets around the star.

From the ring closest to the luminary appeared such planets as Mercury, Venus, Earth, Mars.

The middle ring became the material for all the other planets. The last ring allowed the formation of those comets that are in the Kuiper belt.

The formation of planets in the solar system was influenced quite strongly by the rate of formation of rings. If the process were even a little slower, then this could also cause the formation of super-lands.

Why do people still believe that the Earth is flat : the oldest conspiracy theory

Why do people still believe that the Earth is flat : the oldest conspiracy theory 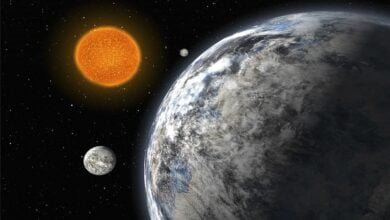