(ORDO NEWS) — There are 10 times more of these structures than we realized — and their source remains a mystery.

Researchers gazing into the center of the Milky Way with one of the world’s largest radio telescope arrays have discovered thousands of mysterious strand-like structures never seen before.

These structures, known as radio filaments, jut out of the galactic center in long, thin tendrils — some of which stretch up to 150 light-years long, or nearly 40 times the distance between Earth and the nearest next-door star system, Proxima Centauri.

While scientists have known that filaments exist around the galactic center for several decades, this new set of high-definition observations from the MeerKAT radio telescope in South Africa reveals that there are 10 times more of the spindly structures than previously thought. Studying the mysterious structures in bulk could help researchers finally figure out just what these filaments are, and how they were created.

“Just examining a few filaments makes it difficult to draw any real conclusion about what they are and where they came from,” study lead author Farhad Yusef-Zadeh, a professor of physics and astronomy at Northwestern University in Evanston, Illinois, said in a statement. “Now, we finally see the big picture — a panoramic view filled with an abundance of filaments… This is a watershed in furthering our understanding of these structures.” 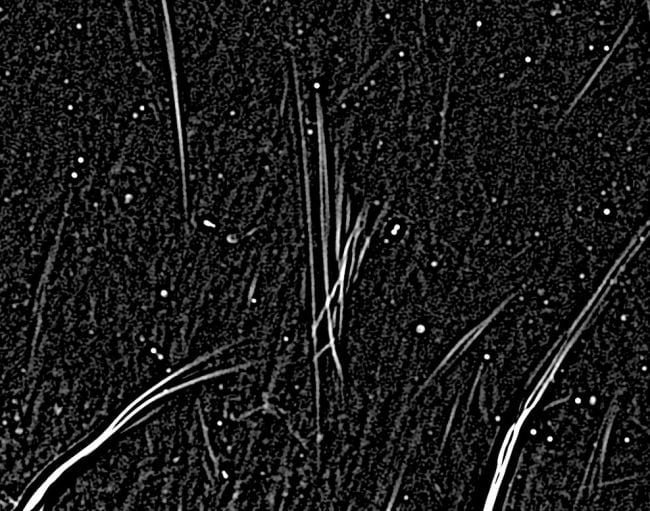 The center of the Milky Way is packed with mysterious objects that are too obscured by gas and dust to properly study with visible light wavelengths. But by focusing on the energetic radio waves radiating from the galactic center, astronomers can get a glimpse of some of the powerful structures and interactions occurring there.

Using the MeerKAT radio telescope — an array of 64 antennas in the Northern Cape province of South Africa — the authors of the new studies observed the galactic center’s radio activity for 200 hours, spread over three years. From these observations, the researchers pieced together a mosaic of 20 separate observations, each focusing on a different section of the radio sky.

The resulting panorama captures many known sources of radio waves — such as bright supernova remnants and the gassy regions of space where new stars are twinkling to life — as well as the mysterious fingerprints of nearly 1,000 radio filaments.

What are these finger-like structures, exactly? According to Yusef-Zadeh, the best working hypothesis is that the filaments are generated by cosmic rays — high-energy particles accelerated through space at nearly the speed of light — moving through a magnetic field.

Prior studies have shown that something lurking at the center of the Milky Way acts as a gigantic particle accelerator, constantly blasting cosmic rays outward into space — although the source of these rays remains a mystery.

One clue might be the enormous pair of radio bubbles puffing out from the galactic center, one looming just above the galactic plane and the other swooping below it. Discovered in a previous MeerKAT survey, each bubble of radio energy towers roughly 25,000 light-years high (about a quarter of the width of the Milky Way itself), and was likely produced by an ancient explosion from the galaxy’s central black hole.

According to the authors of the new studies, many of the newly-detected radio filaments fall within the cavities of these enormous bubbles. It’s possible that the strand-like filaments were created by the same ancient burst of black hole activity that inflated the radio bubbles millions of years ago. However, even this explanation leaves some big questions unanswered.

“We still don’t know why they come in clusters or understand how [the filaments] separate, and we don’t know how these regular spacings happen,” Yusef-Zadeh said. “Every time we answer one question, multiple other questions arise.”

Future radio surveys of the region will focus on whether the filaments move or change position over time, the researchers said.