(ORDO NEWS) — There is a story that begins with a group of European archaeologists overseeing excavations in northern Iraq. They are somewhere near Mosul in Iraq.

They arrived in this part of the world to unearth the relics of the bygone empire of Assyria – a cruel but effective state, consisting of warrior kings and their terrible armies.

For the archaeologists themselves, the significance of Assyria is twofold: firstly, the Assyrian state for some time ruled the largest and most powerful empire in the world.

They ruled with the edge of the sword, and tales of their shocking inhumanity towards their defeated enemies are still able to terrify even the most severe imagination.

Secondly, the Assyrians and the empire they created were one of the main enemies of both the kingdoms of Israel and Judah. Therefore, Assyrian villains are found everywhere in the Old Testament.

Indeed, the Book of Nachum details the fall of the Assyrian capital of Nineveh, the most hated walled city in the ancient Near East. For the Jews, an early prophecy that Nineveh, the walled city, would be destroyed: 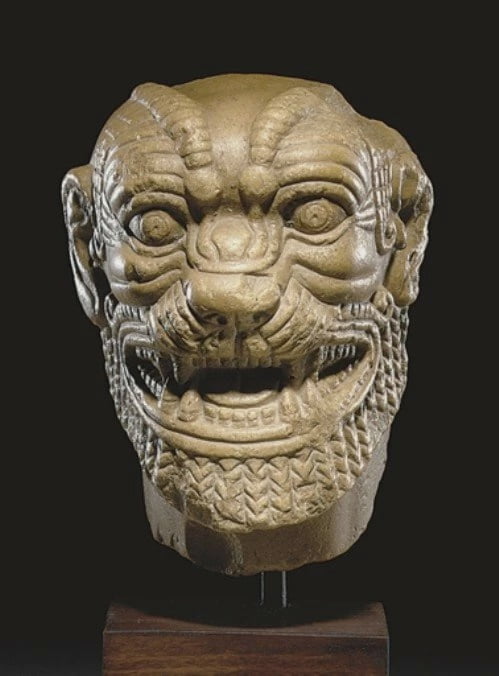 “the city of blood, full of lies, full of robbery” (Nahum 3:1), would fall, it must have seemed a divine gift of salvation.

Besides biblical prophecy, our European archaeologists undoubtedly knew that Jesus Christ spoke Aramaic, the lingua franca of the Middle East. It was the language used by the Neo-Assyrian Empire, along with the older Akkadian, as a tool for imperial unification in trade and administration.

While European archaeologists rock themselves in bed with thoughts of finding evidence for the existence of the historical Jesus, or perhaps discovering something that has been lost to written history for thousands of years, their local workers, most of whom are devout Muslims, are praying that the expedition found nothing. After all, it would be unwise to upset the old gods, who represent powerful demons to them.

But in the morning, under the hot, dry sun of old Assyria, the workers stumble upon something big.

Frantically raking the ground, they recognize the face. The face has a long square beard braided into three rows of ringlets. Above the hair – something like a crown.

My God, they found a statue of Lamassu, a protective deity. They have awakened the old gods. They run in terror.

So the story goes…

But as you can see, the old gods of Mesopotamia are not to be taken lightly. According to the book of the famous British Egyptologist Sir E.A. Wallis Budge “Amulets and Superstitions”:

“the literature of the Sumerians and Babylonians … proves that the people who inhabited Mesopotamia from about 3000 B.C. onward attached great importance to magic in all its branches, and that they used the services of a magician for every possible occasion.” 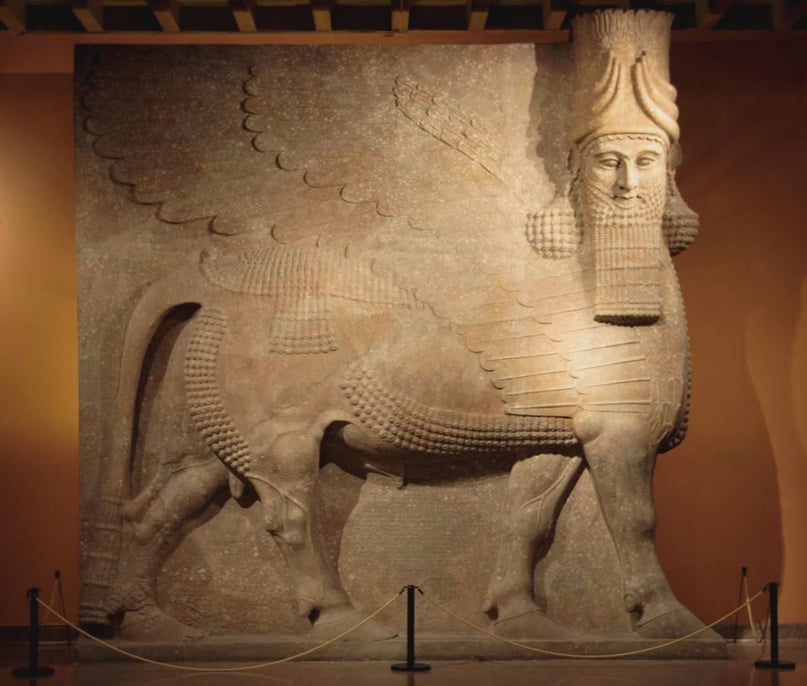 Much of this ancient magic included protection from the many demons that tormented them, from the spirits of the angry dead to Archangel Lamashtu, a female demon who lived in mountains and reed brakes and preyed on pregnant women and children.

Once again, Budge was succinct when he stated that from the earliest moments of recorded time, the people of Mesopotamia “were in perpetual fear of being attacked by a host of hostile and evil spirits who did not miss an opportunity to try to harm them.”

In order to understand Assyrian demonology, it is necessary to appreciate the preceding peoples, for the Assyrian religion and even the Assyrian way of warfare was inherited (although the Assyrians added excessive cruelty, so that at least one innovation can be attributed to them).

It all started in Sumer, the first great civilization in Mesopotamia (modern southern Iraq). They created not only writing, but also a whole pantheon that served their successors until the arrival of Alexander the Great.

The Sumerian gods included: Enlil, lord of the storm and heroic head of the pantheon, the goddess of air Ninlil and Inanna, the female god of fertility, war and wisdom.

To worship these gods, the Sumerians built impressive ziggurats, or stepped temples. Cities such as Uruk, Nippur, and Eridu (which the Sumerians considered ancient, making it possibly the oldest city in the world) served as trading and religious centers.

There were deities associated with specific cities, as well as monsters such as Tiamat, the primal ocean chaos demon who serves as the main antagonist in the Babylonian creation myth, the Enuma Elish.

[This text, as well as the neo-Sumerian Epic of Gilgamesh, were rediscovered in 1849 by the British archaeologist Sir Austen Henry Layard in the royal library of Ashurbanipal in Nineveh. Ashurbanipal was the last great king of the neo-Assyrian empire].

Their cosmology also featured dark, malevolent gods… and none of them was more vile than Ereshkigal, goddess of the underworld, or Irkalla. Together with Nergal, god of the plague, Ereshkigal acted as the tyrant of Irkalla and was the chief judge of the dead.

The story of Inanna’s descent into the underworld gives an idea of ​​Ereshkigal’s atrocities:

Ereshkigal rose from her throne.

Inanna went to the throne.

Annuna, judges of the underworld, surrounded her…

Then Ereshkigal fixed the eye of death on Inanna…

She spoke a word of wrath against her…

She uttered a cry of guilt against her…

Inanna was turned into a corpse.

A piece of rotting meat.

And hung on a hook on the wall…

Inanna, better known by the Akkadian name Ishtar, manages to defeat Ereshkigal’s machinations and return to the world of the living. For hurting her, Ereshkigal threatens Inanna to show his power and send the army of the dead above the earth as a moving plague aimed at destruction. 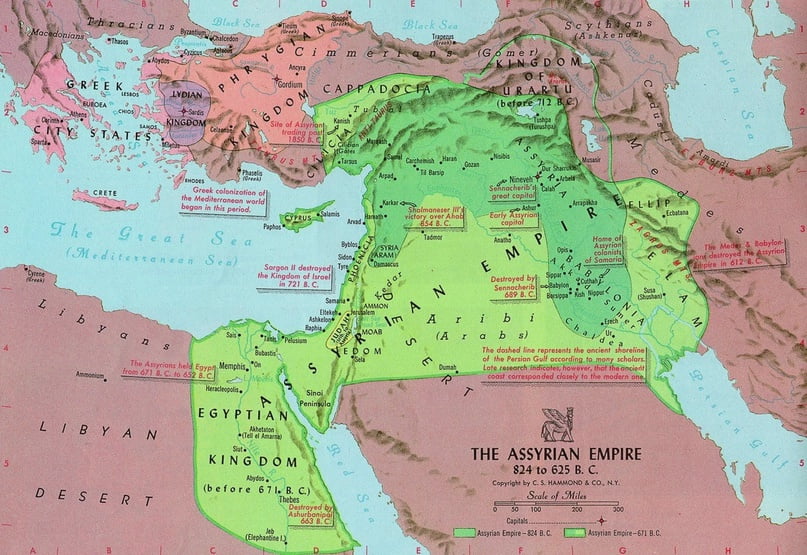 To their enemies, the Assyrian hordes must have seemed like an army of the voracious dead Ereshkigal; it was a people of terrible warriors. And although their rise was slow, and the fall impressive, the Assyrians left an indelible mark on the regions they conquered… More than anything, they sowed fear.

Evidence of this is the fact that the first Jews turned the Assyrian gods into demons. Astarte, the Assyrian version of Ishtar, became Astaroth, the crowned prince of hell. Similarly, the Assyrian Bel, whom the Canaanites called Baal, became Beelzebub, the demonic “lord of the flies.”

Although these later Judeo-Christian interpretations shaped the Western world’s view of the Mesopotamian religion as a fundamental evil, the Assyrians themselves were not without their demons.

(Again, most Assyrian demons existed before, in the mythology of earlier Mesopotamian societies. These include the Sumerian ekimmu, a type of vampiric ghost, or the Akkadian lilu and lili, male and female demons who more than likely inspired Lilith.

In the Old Testament.Demons that were specific to the Assyrians, or at least more commonly used by them, include Ila Limna, the “evil god” who was never given specific characteristics, and the galla, or bull-demon).

In Devils and Evil Spirits of Babylonia, Assyriologist Reginald Campbell Thompson details the various “demons, ghouls, vampires, hobgoblins, ghosts” that cursed the regions around the Tigris and Euphrates… as well as the Babylonian and Assyrian spells that were used against them.

According to Thompson, the Assyrians had a great fear of sorcerers, whom they called “The Dead”.

However, most of all they feared the ekimmu and the wind spirits. The most famous Assyrian wind spirit widely known today is Pazuzu, the son of the god Hanbi and demon of the southwest wind.

With the body of a lion or dog, a scorpion tail, wings, claws, and a serpentine phallus, Pazuzu brought famine and locusts during dry seasons. In a strange way, Pazuzu was a rival of Lamashtu (the goddess who hunted pregnant women and children), and therefore his image was often used to fight other demons.

Of course, Pazuzu’s fame was the result of William Peter Blatty’s The Exorcist. Although the movie more explicitly than the book portrays the spirit of Pazuzu as a monster haunting the young Regan McNeil (however, neither movie explicitly states that the demon is really Pazuzu), the message is clear.

Blatty’s decision to make the main evil in The Exorcist a pre-Christian, Assyrian demon is in line with the Western tradition of seeing everything Mesopotamian as depraved.

What’s more, by beginning his novel, and therefore film, in northern Iraq, Blatty made a conscious decision to play to his audience’s preconceived notions…