Understanding the correlation of these changes is essential to improve forecasts and adaptation strategies for Arctic coasts. In a special issue of the journal Nature Reviews Earth & Environment, researchers from the Alfred Wegener Institute describe the sensitivity of Arctic coasts to climate change and the challenges for humans and nature.

“The pace of changes in the Arctic is increasing, leading to accelerated coastal retreat,” says Dr. Anna Irrgang of the Alfred Wegener Institute, Helmholtz Centre for Polar and Marine Research (AWI). “This affects both the natural and human environment, for example, by releasing carbon from the soil into the sea and atmosphere, or losing the land that supports communities and infrastructure.”

Exactly how and how much coasts are changing depends on the interplay of the local coastal settings, like the presence of permafrost, and environmental factors such as air and water temperature. “Predictions about this are often subject to large uncertainties because reliable oceanographic and environmental data for remote coastal zones are limited,” Irrgang says.

To improve understanding and thus predictions of future developments, the AWI permafrost researcher has compiled the most important factors and drivers that affect Arctic coasts and that are important for developing adaptation strategies to climate change along Arctic coasts.

Arctic coasts have different structures depending on the region. In Alaska, Canada or Siberia, for example, they are particularly rich in ground ice with permafrost bluffs that range in height up to 40 meters. In Greenland, Svalbard and the Canadian Archipelago, on the other hand, the coasts usually contain little to no ground ice but, instead, large volumes of coarse, glacially derived sediment, or even solid rock. 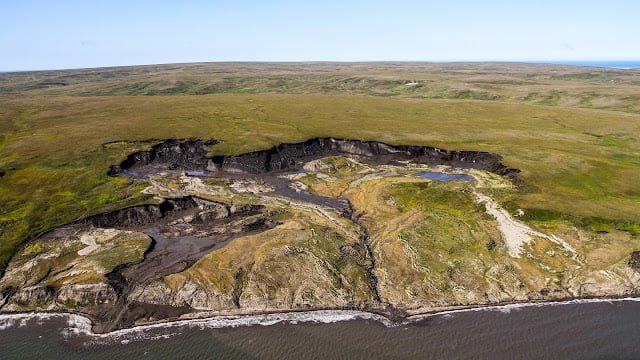 These regional geomorphological differences influence how other environmental variables affect coasts. For example, if air and water temperatures change, it affects the entire coastal system. Ice-rich permafrost bluffs, for example, some of which are up to 80 percent ice, are quite resilient to mechanical wave action. However, when they thaw due to increased air and water temperatures, they become particularly vulnerable to destruction by waves, which manifests itself in rapid coastal erosion.

Arctic coasts are thus particularly sensitive to climate: Global warming is causing large areas of permafrost to thaw, ground ice to melt and land surfaces to collapse. This in turn affects the availability and quality of water, the growth of plants, and increases soil stripping (erosion) and coastal flooding. In addition, sea surface temperatures rise in most parts of the Arctic, which can extend the sea ice-free period. Coasts are then exposed to strong waves for much longer, especially during the stormy fall season.

Comparing the rates of change of Arctic coastlines shows that the overwhelming majority of permafrost coasts are receding due to erosion. Northern Canada’s Herschel Island, for example, loses up to 22 meters of bluff per year. When permafrost thaws, it allows organic carbon, nutrients and pollutants to be released into the nearshore environment and the atmosphere. Experts estimate that coastal erosion releases about 14 megatons of organic carbon into the Arctic Ocean each year—which is higher than the amount of particulate organic carbon provided by Arctic rivers. The thawing of previously solid soils is also affecting local people. 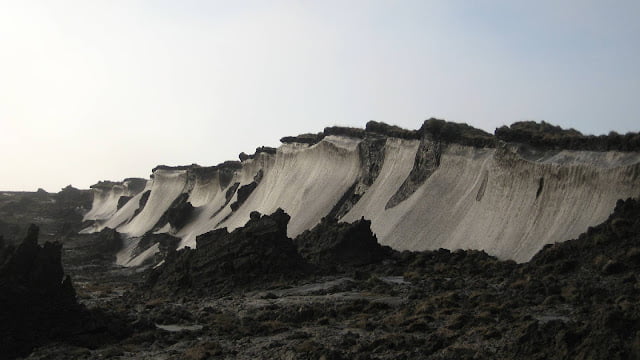 Around 4.3 million of them will be confronted with the consequences: they will lose buildings and roads, traditional hunting grounds and also cultural sites. In Alaska, already entire settlements need to be abandoned and people have to relocate.

The erosion of frozen areas increases the risks of permafrost thaws and currently incalculable environmental pollution from industrial infrastructures. Only in the long term, new opportunities could open up as a result of the changes, due to access to resources in previously inaccessible regions, new agricultural areas and shipping routes for trade and tourism.

“Our current understanding of Arctic coastal dynamics is fragmented, with too few data with high spatial and temporal resolution on environmental factors and shoreline changes,” says Anna Irrgang. “While such datasets already exist for some regions such as northern Alaska, most of the Arctic coast is poorly mapped.” 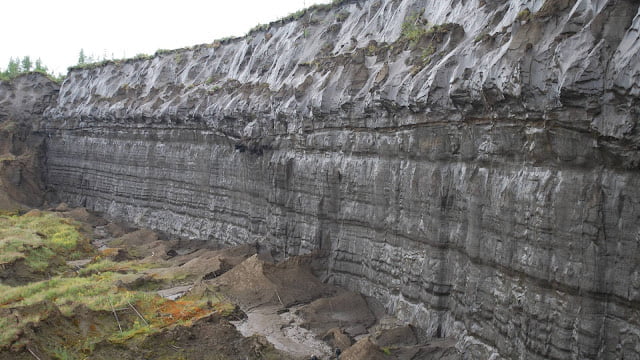 Yet Arctic-wide observations of environmental factors and coastal changes are urgently needed to reduce uncertainties in forecasts. These would help local communities to deal with new socio-ecological developments. “For this, we need to develop adaptation methods that enable good and sustainable living conditions in Arctic coastal settlements. Close cooperation with local people is central to this,” says Anna Irrgang.

The analysis of Arctic coastal change is part of the special issue “Permafrost” of the journal Nature Reviews Earth & Environment.

The AWI Permafrost Section is also involved with two additional contributions: In a review, researchers show how millions of dew lakes and drained lake basins have formed and grown in Arctic and boreal lowland areas as a result of the melting of ice-rich permafrost.

These processes influence landscape and ecosystem processes as well as human livelihoods in the vast Arctic lowland regions. A third article presents the “Permafrost Comics” project, which uses cartoons to make knowledge about permafrost more easily accessible to a broad and especially young audience.