(ORDO NEWS) — Archaeologists presented the results of the study of the cave monument Tsagaan-Agui, which is located in the Gobi Altai. Scientists managed to find artifacts covering a vast period from the Middle Paleolithic to the Middle Ages.

Among the finds were stone tools, carnelian beads, a fragment of birch bark with inscriptions in the old Mongolian language, as well as faunal remains.

An analysis of these fossils indicated that about 60,000–27,000 years ago, the vicinity of the site was predominantly a dry steppe, inhabited by such animals as argali, Knobloch’s camels, gazelles, kulans, orongos, and cave hyenas.

The latter, in particular, arranged a lair directly in the cave itself. This is reported in an article published in the journal Antiquity.

In the era of the Middle Paleolithic and at the initial stage of the Upper Paleolithic, the settlement by ancient people of Central Asia mainly took place in the middle mountain steppe or forest-steppe zones, where herd ungulates were present.

However, at least since the Middle Paleolithic, man has lived in regions where the climate today can be called extreme. For example, in Tibet, archaeologists have discovered high-mountain sites that are probably associated with the Denisovan man.

Another example is in the Gobi Altai, on the territory of the modern Bayankhongor aimag, where in 1972 the Tsagaan-Agui cave site was discovered. Research carried out in the late 1980s made it possible to discover on this monument the most striking manifestation of the Levallois industry in Mongolia.

This cave, located at an altitude of about 2000 meters above sea level, today is located in an area with extreme climatic conditions. There are no good quality stone raw materials, poor vegetation, no herd ungulates, high aridity and severe temperature fluctuations. 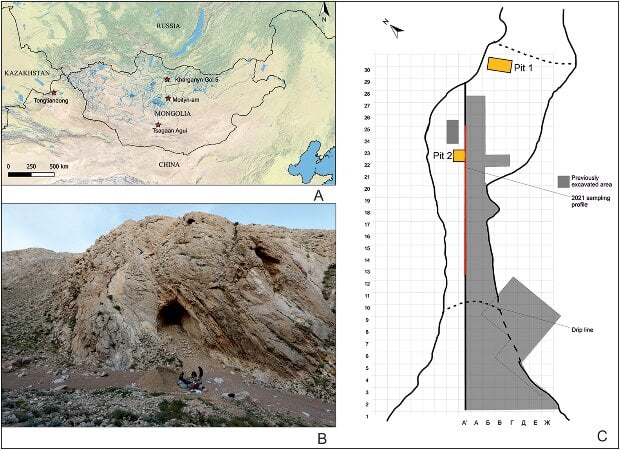 A group of scientists from Mongolia, Russia and the USA led by Anatoly Derevianko from the Institute of Archeology and Ethnography of the Siberian Branch of the Russian Academy of Sciences presented the results of excavations that took place in the Tsagaan-Agui cave in 2021.

Last year, scientists laid two excavations on this monument. In the first, they found a sequence of three cultural layers that did not match the previously described stratigraphy. Thus, two of them belong to the Holocene epoch, and the deposits in them turned out to be mixed as a result of later, including modern, human activity.

The third layer appears to be from the Pleistocene, but also contains mixed archaeological material. In this excavation, scientists discovered materials covering the period from the Bronze Age to the Middle Ages (about 3300 BC – 1500 AD).

Among the artifacts found were carnelian beads, a fragment of birch bark with an inscription in the old Mongolian language, a bronze spoon, and fragments of wood. In addition, scientists have found stone artifacts and faunal remains of the Pleistocene era.

In the second excavation, the researchers discovered a longer sequence of cultural layers, excavating them up to layer-6. Layer-1, according to archaeologists, was accumulated during the Holocene. Layer 2.1 turned out to be much older – its deposits date back to the time of the maximum of the last glaciation or even before it.

Judging by the earlier dates obtained using the method of electron paramagnetic resonance, it refers to 25,000 ± 2,000–23,000 ± 2,000 years ago. In this layer, scientists found stone artifacts (mainly flakes), made mainly from non-local raw materials.

Among them was an object of Paleolithic art – a processed rod made of serpentinite (serpentine), the nearest outcrops of which are located 40 kilometers from the cave. Stone tools (a flake and two end-scrapers) were also found in cultural layer-2.2. The layer-3 industry was identified by archaeologists as belonging to the initial stage of the Upper Paleolithic. Products of Levallois cleavage, bilongitudinal plates, and some other artifacts testify to the transitional nature of this complex.

According to them, the collection of these finds turned out to be similar to those found in the Xinjiang Tuntiandong cave (44-42 thousand years ago) and at the Mongolian sites Harganyn-Gol-5 and Moiltyn-am (50-38 thousand years ago).

In addition, the set of tools pointed scientists to probable connections with the western regions of Central Asia and China. Stone artifacts of the Middle Paleolithic were also contained in the fourth-sixth cultural layers.

In the lower part of layer-2.1 and in layer 2.2, archaeologists found evidence that the cultural layer had been dug up. In these darker deposits, scientists found small fragments of animal bones, as well as 62 coprolites. The study of these finds suggested that this place was the lair of the cave hyena (Crocuta spelaea).

In layer-3, archaeologists found the remains of a fire pit, the charcoal from which made it possible to conclude that large pieces of wood were burned at the site. Based on past radiocarbon dates, this charcoal is about 33,000 years old.

The study of the fossilized remains of animals found in the Tsagaan-Agui cave showed the richness of the fauna of the Gobi Altai in the Pleistocene and early Holocene.

In the cultural layers belonging to the marine isotope stage 3 (about 60-27 thousand years ago), archaeologists discovered, in addition to the remains of the cave hyena, the bones of the onager (Equus hemionus), the Knobloch camel (Camelus knoblochi), the gazelle (Procapra gutturosa), and the argali (Ovis ammon) and orongo (Pantholops hodgsonii).

According to scientists, this indicates that a dry steppe environment prevailed in the vicinity of the cave for most of the Pleistocene. Archaeologists have concluded that the Tsagaan-Agui site is the oldest known stratified site of the Middle Paleolithic era discovered in Mongolia.

Last giant camels lived next to people in Mongolia 26.5 thousand years ago

Last giant camels lived next to people in Mongolia 26.5 thousand years ago