(ORDO NEWS) — Archaeologists examined the sewers under the Colosseum and found the remains of olives, figs, cherries and other fruits.

It seems that the ancient Romans used these foods as a snack when they attended performances in the Flavian Amphitheatre. Other finds included animal bones and antique coins.

The Colosseum (also known as the Flavian Amphitheater) is perhaps the most recognizable ancient building not only in Rome, but throughout Italy.

The order to build this largest ancient Roman amphitheater was given by the emperor Vespasian back in 72 AD, but he himself did not live a few months before the completion of the work.

The opening of the Colosseum, accompanied by grandiose gladiatorial games and baiting of animals, took place in 80, already under Emperor Titus.

The Colosseum is an elliptical structure measuring 190 × 156 meters in size, consisting of an arena and seats for spectators arranged in several tiers.

In addition, part of the premises was located under the arena – there, in particular, there were premises for animals and gladiators.

Subsequently, the already closed amphitheater was badly damaged during raids, earthquakes, and also because of the Romans themselves, who turned the ancient structure into a quarry.

Since January 2021, archaeologists have explored about 70 meters of the almost two thousand-year-old sewers of the Colosseum.

During these works, they found the remains of olives, figs, grapes, cherries, blackberries, walnuts and some other fruits.

The researchers suggest that the finds may represent snacks that the ancient Romans ate when they came to performances at the Colosseum as spectators.

A photograph with some of the findings back in July of this year was published on her Twitter page by archaeologist Joanne Ball from the University of Liverpool. 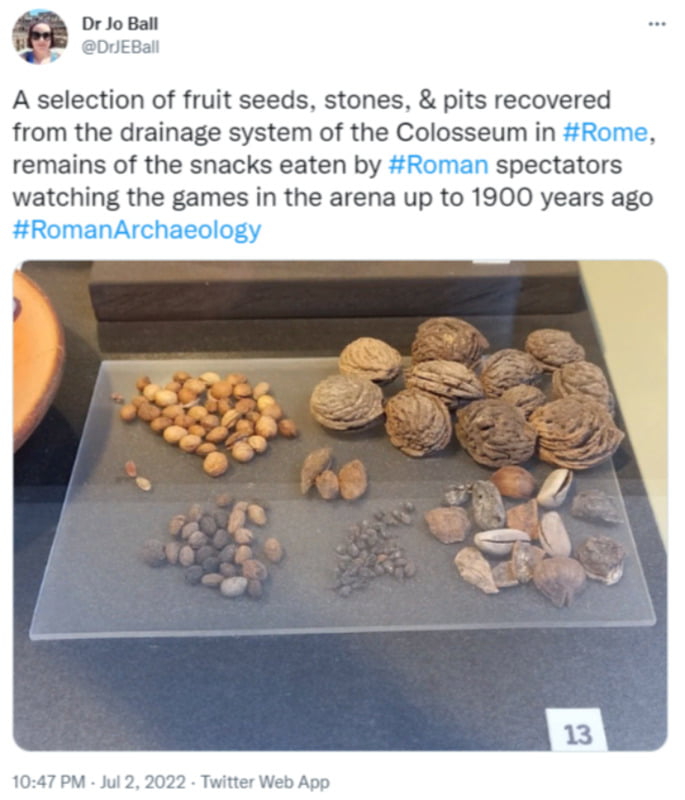 In addition, archaeologists have found bones of dogs, lions, leopards and bears. Large animals could well participate in performances in which they fought each other or with gladiators.

During the excavations, the researchers also found 50 bronze coins from the late Roman period (about 250-450 AD), as well as one silver coin from 170-171 AD, minted in honor of the decade of the reign of Emperor Marcus Aurelius.

The Romans, of course, ate not only during visits to the Colosseum. For example, in many cities of the empire there were eateries where you could taste inexpensive hot dishes of local cuisine.